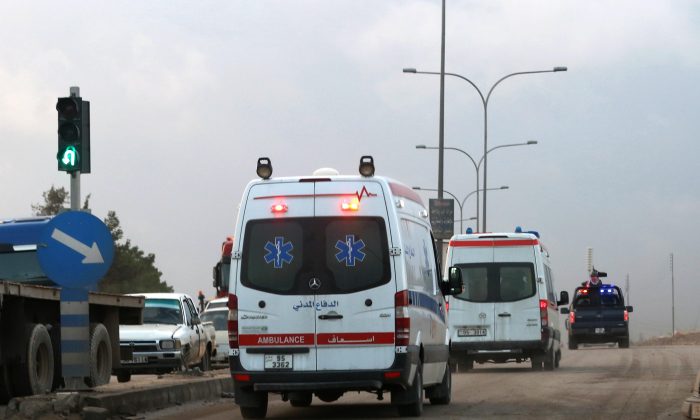 It was not clear if there was a political motive to the shooting spree, which also wounded six people, including two Americans. But concern has swirled in staunchly pro-Western Jordan over possible revenge attacks by Islamic militants since the country assumed a high-level role in the U.S.-led military campaign against the Islamic State extremist group, which controls large areas of neighboring Syria and Iraq.

The unprecedented assault inside a Jordanian security compound also raised questions about the kingdom’s image as an island of relative stability in a turbulent region.

The shooting took place at the Jordan International Police Training Center in Amman, where Jordanian and foreign instructors, including Americans, have trained thousands of police officers from the Palestinian territories and other parts of the Arab world in recent years.

Momani did not release the assailant’s name, but a former Jordanian parliament member, Suleiman Saed, identified him as his 29-year-old relative, Anwar Abu Zaid, a captain in the police force. He said the assailant’s identity was given to him by a senior official in the Public Security Department.

A U.S. official, speaking on condition of anonymity because he was not authorized to brief the media, said eight people died in the attack, but Momani would only confirm five.

In Washington, President Barack Obama said that “we take this very seriously and will be working closely with the Jordanians to determine exactly what happened.”

The wounded—three Jordanians and a Lebanese in addition to two Americans—were treated at an Amman hospital where King Abdullah II paid a visit.

The alleged shooter’s brother, Fadi Abu Zaid, told The Associated Press his brother was mentally stable and “not an extremist at all.”

He said the father of two joined the security forces at age 18 and had been working at the training center for several months. He said his brother had given notice recently because he had received a job offer from a Gulf country, but that he had reported to work as usual on Monday.

In Abu Zaid’s home village of Rimon, north of Amman, about 200 relatives and neighbors gathered in the family’s diwan, or tribal meeting area. They did not start the formal three-day wake because the government has not released the body, said Saed, the former parliament member.

In any case, the family will not accept the body before hearing details of the circumstances of Abu Zaid’s death, Saed said.

Momani said Jordanian authorities launched an investigation into what may have motivated the shooting.

“We have full confidence in our security measures, and the investigation will uncover the motivation behind what happened,” Momani said. In an earlier statement, he referred to the shooting as a crime.

The shooting coincided with the 10th anniversary of the bloodiest attack by Islamic militants on Jordanian soil—triple hotel bombings in Amman that killed 60 people and wounded more than 100. But with the attacker’s motives unknown, it was not clear if there was any link.

Abdullah and his wife Queen Rania marked the anniversary Monday with a prayer for the dead during a memorial service for victims.

While U.S. forces in Afghanistan have come under attack on a number of occasions by local police and troops serving alongside them, in what are known as “green-on-blue” assaults, such attacks are extremely rare in the Middle East.

Fayez Dwairi, a strategic analyst and former senior military officer in Jordan, said he could not recall such a deadly shooting inside a Jordanian security compound in his 36 years in the military.

He said the attack might lead to more security precautions in facilities where foreigners are present, but that it was unlikely to affect Jordan’s close security ties with the West, particularly the U.S.

Such cooperation has deepened in recent years, with the upheavals of the Arab Spring uprisings and the rise of Islamic militancy in the region, said Dwairi, a former commander of Jordan’s Engineering Corps.

“There is a need for both sides, especially in the intelligence field, for the transfer of information,” he said. “That need exists while the situation in the Middle East deteriorates.”