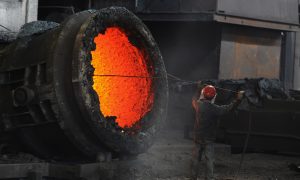 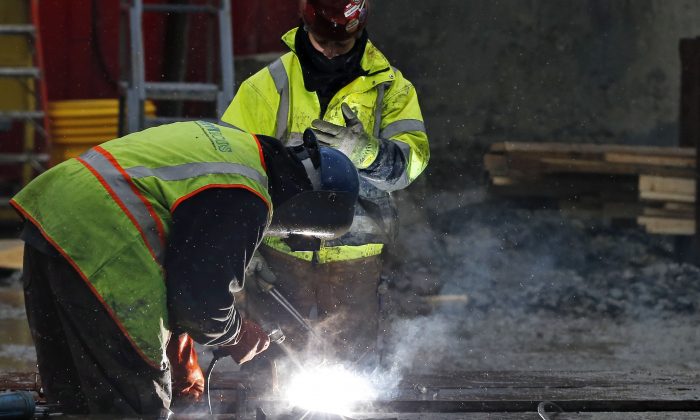 In this Monday, Jan. 12, 2015 photo, workers weld at a commercial construction site in Boston. (AP Photo/Elise Amendola)
US

Jobs Report Could Signal Whether US Economy Is Strengthening

WASHINGTON—Friday’s jobs report for May could provide some evidence of the forces that will drive the U.S. economy over the next year.

So far, the economy has lurched through 2015. Momentum coming out of last year was derailed by a rising dollar depressing exports, a nasty winter freezing spending and cheaper oil damaging energy companies.

Consumers, the main driver of the U.S. economy, remain fairly cautious. Factory orders have dropped. During the first three months of 2015, the economy actually shrank.

But many economists have written off the slump as temporary.

“More like a sniffle than a lingering illness,” said Andrew Chamberlain, chief economist at Glassdoor, a jobs marketplace. He sees underlying strength in the job market and notes that the effects of a winter slowdown are fading.

Economists have forecast that employers added 227,000 jobs in May, according to a survey by FactSet. That increase would be roughly in line with April’s gain of 223,000 and near the monthly average of 248,333 over the past year. The unemployment rate is expected to remain 5.4 percent, a seven-year low.

The government will issue the jobs report at 8:30 a.m. Eastern time.

The report could confirm the economy’s vitality. Auto and home sales are accelerating despite otherwise slow-spending consumers. More big employers, such as Wal-Mart, have unveiled pay hikes.

Those factors could power faster growth, fuel job gains and boost wages. If they do, a broader economic recovery than the one that’s existed in the six years since the Great Recession officially ended could emerge.

Over the past 12 months, nearly 3 million jobs have been added. Those additional paychecks helped increase spending on housing and autos.

Sales of newly built homes have surged 23.7 percent through the first four months of 2015 compared with a year ago, government data show. Rising demand for new homes could lead construction firms to ramp up hiring.

Americans bought 1.64 million cars and trucks in May, the most since July 2005. If that trend were to endure, it would benefit a manufacturing sector that’s added a scant 4,000 jobs since January.

Employers seem to be envisioning a healthier economy, given that the weekly number of people applying for unemployment benefits — a proxy for layoffs — has remained under a historically low 300,000 for more than four months. By holding on to nearly all their workers, businesses are ensuring that they will have the capacity to respond to greater customer demand.

But the economy faces other challenges. The dollar has appreciated about 19 percent in the past year against other major currencies. That trend has made U.S. goods costlier overseas, thereby squeezing exports and the U.S.-based branches of foreign companies.

Nor has cheaper gasoline delivered much help. Instead of sparking the wave of consumer spending that many economists had expected, a nearly 45 percent drop in oil prices since July has damaged a U.S. economy increasingly reliant on energy drilling. The energy industry has shed workers and cut orders for pipelines and equipment.

The setbacks have been substantial enough that the International Monetary Fund on Thursday said it thinks the Federal Reserve should hold off on raising short-term interest rates until 2016. IMF Managing Director Christine Lagarde, saying a rate increase could disrupt the economy, urged the Fed to await signs of wage growth.

Average hourly wages have slightly outpaced inflation, having risen 2.2 percent in the 12 months that ended in April. That compares with annual gains of more than 3 percent before the recession began.

Falling unemployment usually leads to fewer people seeking work, forcing employers to boost wages. But plenty of people are still searching for jobs. The aftermath of the recession has left 8.5 million people unemployed and seeking work, about 1.3 million more than were jobless before the downturn began in late 2007.

Companies often increase pay when their workers become more productive. Yet productivity fell at a 3.1 percent annual rate in the first quarter — a sharper drop than the decline estimated a month ago, the government said Thursday.