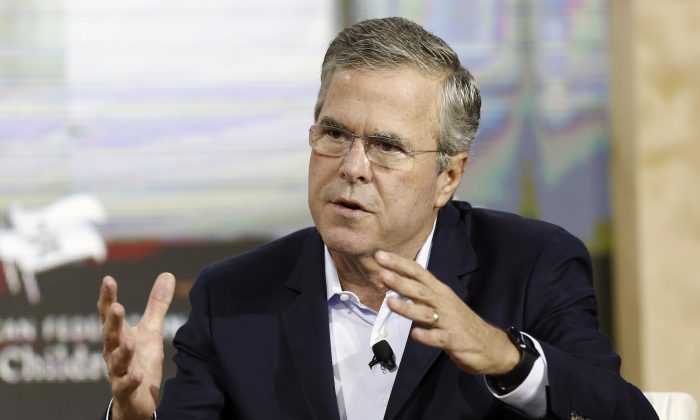 A voter at his town hall had just told him she’d read the candidate’s 3,000-word tax plan. “The fact that you read it makes me feel so pleased — even if you didn’t like it,” Bush said, unsuccessfully holding back a grin.

It was the sort of moment Bush surely dreamed about when he announced his 2016 bid six months ago. Soon, the two were deep in the weeds of his proposals for capital gains taxes on estates, when Bush paused. “We’re having a real wonk-a-thon right now,” he said gleefully.

It was also a moment all too rare for Bush, a former front-runner stubbornly sticking to a sober-minded approach to his campaign despite months of evidence that Republican voters aren’t much interested in what he’s selling.

The portion of Republican registered voters who think Bush could win the general election, should he win his party’s nomination, has dropped to 40 percent in a new Associated Press-GfK poll, down from 60 percent in October.

Perhaps even more troubling for Bush, given his insistence on talking about policy and his ability to govern, the poll found that GOP voters view Trump, the real estate mogul and reality TV star, as more competent than the two-term governor of Florida.

After setbacks in October, including deep campaign spending cuts and a widely criticized debate performance, Bush sought to reassure donors who have contributed more than $100 million to his campaign and a separate pro-Bush organization by resetting his effort with the auspicious slogan: “Jeb Can Fix It.”

Part of the shift in strategy was redoubling Bush’s emphasis on New Hampshire, where aides said the candidate’s serious style and affinity for one-on-one policy engagement was a close fit with New Englanders, who also typically hold themselves as independent of the national story line.

Since then, Bush has held nearly 20 town hall-style meetings in the state, each with about 100 voters attending, including in places most other candidates have not visited.

But the content of Bush’s town halls remains the same, with the brother and son of former presidents passing on Trump’s flash and penchant for bombast to remain centered on telling the story of his time as governor and his detailed plans for the nation’s economy and military.

He has faith — and some good-natured bullheadedness — that voters will eventually come around.

In answering immigration lawyer Marisa DiFranco’s question about what to do with the millions of immigrants in the United States illegally at an event this week, Bush mentioned the immigration policy book he co-authored, explained the economic criteria he would use to increase legal immigration, and then paused.

“Being able to complete that sentence — about what I’m for, in the political environment I’m now in, is an extraordinary opportunity,” Bush said dryly, “and I thank you for it.”

On Thursday in Milford, Bush said after being asked about the federal debt, Social Security, Medicare and taxes: “I’m the only person running for president that has details on any of this stuff, just to remind you.”

He went on, needling in a friendly way the voters he was trying to win over. “I’m not running for entertainer or anything like this. I hope you want a candidate who has actually thought it through, who actually has plans.”

That’s what he’s focused on. He has largely abandoned his tentative and poorly reviewed attacks on Florida Sen. Marco Rubio. Gone, too, are his campaign’s early tussles with Trump on social media.

“It is refreshing isn’t it? To have a conversation rather than have 140 characters drive a campaign,” Bush told reporters this week.

Even when given the chance to connect with voters on a personal level, the self-proclaimed introvert who says he’s more comfortable reading a book than planning a party struggles to campaign in a way that, in his words, gives “people a full measure of a person.”

Take this week’s “The Life of the Party” events at Manchester’s St. Anselm College. Forceful Trump critic and fellow policy wonk John Kasich, the governor of Ohio, made the most of the not-so-serious questions posed by the gathering of students and young professionals.

In a lengthy answer about his favorite music, Kasich listed Pearl Jam, Linkin Park and Foo Fighters. “The problem with traditional radio, if you listen to it, you hear a lot of things that you like, but they never tell you who the band is,” Kasich said.

Asked what music he would play and what food he would serve at a hypothetical White House party, Bush said, “I don’t know,” and suggested he didn’t like the line of questioning. “It might have to be something more serious, I apologize.”

The students were undeterred, and pressed on by asking Bush what celebrity he’d like to meet.

“I don’t know,” Bush said, again. “I really don’t believe in celebritydom. I find it superficial. I’d rather be with people who have done things.”