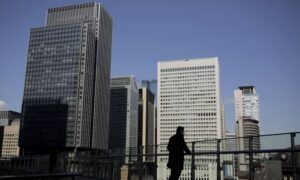 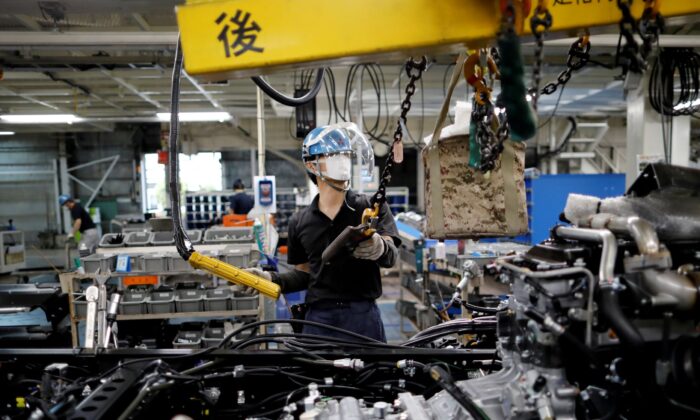 An employee wearing a protective face mask and face guard works on the automobile assembly line at Kawasaki factory of Mitsubishi Fuso Truck and Bus Corp, owned by Germany-based Daimler AG, in Kawasaki, south of Tokyo, Japan on May 18, 2020. (Issei Kato/Reuters)
Economies

TOKYO—Japan’s factory activity grew at the slowest pace in eight months in September as output and orders contracted, while that of the services sector remained in its downturn, underscoring the protracted impact of the coronavirus pandemic.

The au Jibun Bank Flash Japan Manufacturing Purchasing Managers’ Index (PMI) slipped to a seasonally adjusted 51.2 in September from a final 52.7 in the previous month, marking the slowest growth since January.

Factory activity has faced headwinds from disruptions of parts supplies due to the rapid spread of the highly contagious Delta variant as well as a global semiconductor chip shortage.

The September data showed Japanese manufacturers’ output shrank at the fastest pace in a year, while overall new orders contracted at the quickest speed in 10 months.

The au Jibun Bank Flash Services PMI index remained in contraction, though it rose to a seasonally adjusted 47.4 from the previous month’s final of 42.9, which was its lowest since the depths of Japan’s COVID-19 slump of May 2020.

The au Jibun Bank Flash Japan Composite PMI, which is calculated using both manufacturing and services, was in contraction for a fifth consecutive month, though it gained to 47.7 from August’s final of 45.5.

“Flash PMI data indicated that activity at Japanese private sector businesses was scaled back further in September,” said Usamah Bhatti, an economist at IHS Markit, which compiled the survey.

“The pace of decline was softer than that seen in August, as the larger services sector saw a considerable easing in the rate of contraction.”

Manufacturers’ input prices rose at the fastest pace since September 2008, the survey showed.

“Input prices across the private sector rose at the fastest pace for 13 years, with businesses attributing the rise to higher raw material, freight and staff costs amid supply shortages,” Bhatti said.