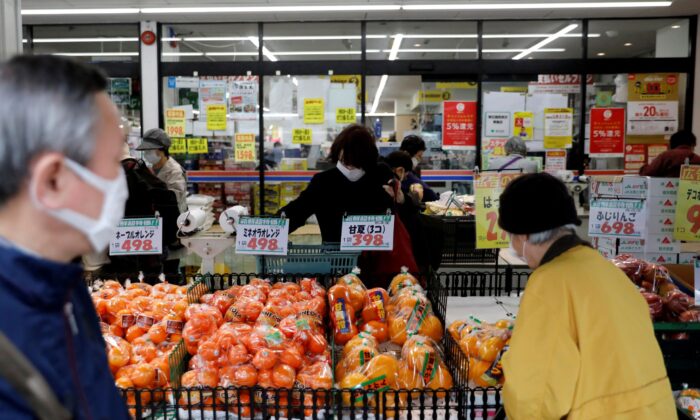 Shoppers wearing protective face masks, following an outbreak of the coronavirus disease, are seen at a supermarket in Tokyo, Japan, on March 27, 2020. (Issei Kato/Global Business Week Ahead)
Economy

Separate data is also expected to show Japan likely ran the biggest trade deficit in eight years in January as persistent rises in fuel and raw material costs swelled imports, according to economists polled by Reuters.

The nationwide core consumer price index (CPI) likely rose 0.3 percent in January from a year earlier, slowing from a 0.5 percent gain in December, the poll of 16 economists showed on Friday.

The slowdown is largely due to one-off factors such as the base effect from a suspension of the government’s travel discount campaign in late 2020.

When stripping away such temporary factors, consumer inflation is likely to be perking up, analysts say.

And yet, many analysts expect consumer inflation to remain distant from the Bank of Japan’s 2 percent target for the time being, forcing the central bank to maintain ultra-loose policy.