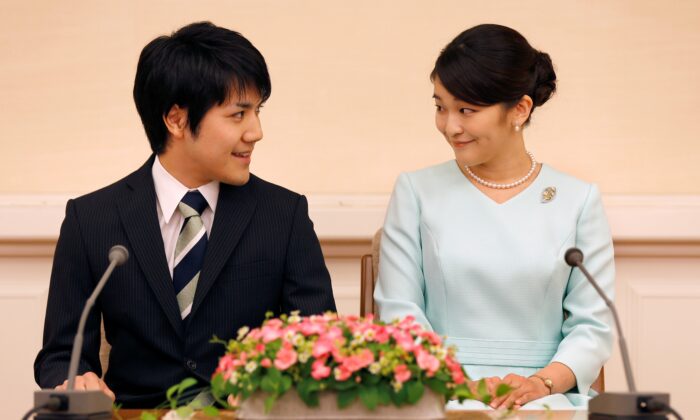 Princess Mako, the elder daughter of Prince Akishino and Princess Kiko, and her fiancee Kei Komuro, a university friend of Princess Mako, smile during a press conference to announce their engagement at Akasaka East Residence in Tokyo, Japan, on Sept. 3, 2017. (Shizuo Kambayashi/Reuets)
Asia & Pacific

Japanese Princess to Marry Commoner Next Week Despite Financial Dispute

TOKYO—Japan’s Princess Mako will marry a commoner in a subdued ritual on Tuesday after a four-year engagement plagued by scandal and media speculation, which has left the 29-year-old with post-traumatic stress disorder (PTSD).

Their Tuesday marriage will mainly consist of filing paperwork, then holding a news conference. While marrying out of royalty isn’t uncommon in Japan, the lack of pomp for a royal wedding is. Mako even turned down the usual $1.3 million payment given to women leaving the family.

An engagement first cheered by the Japanese people soon became troubled as tabloids reported a money scandal involving Komuro’s mother, prompting the press to turn on him.

In the absence of clear explanations by the Imperial Household Agency (IHA), which runs the family’s lives, the story spread to the mainstream press, usually scrupulous in royal reporting.

The saga began quietly enough in 2017 when the two college sweethearts announced their engagement.

“I’ll be happy if I can make a warm and comfortable family full of smiles,” Mako told a news conference, with the loving looks they exchanged captivating the nation.

But just months later, the tabloids reported a financial dispute between Komuro’s mother and her former fiancé, with the man claiming the mother and son hadn’t repaid a debt of about $35,000. Komuro has said the money was provided as a gift, not a loan. In 2021, he issued a 24-page explanation and also said he would pay a settlement.

In February 2018, the marriage was postponed until 2020, ostensibly for more time to “prepare.” Six months later, Komuro left for Fordham University’s law school, to return only three years later.

“The royal family should exist without troubles connected to money, the economy, or politics,” said Akinori Takamori, a lecturer at Kokugakuin University in Tokyo.

“Morally, the Japanese people want them to be impeccable.”

Mako’s father Crown Prince Akishino told a news conference in 2018 that without solving the financial issue, the marriage couldn’t take place, adding he and his daughter “don’t speak that often recently.”

He grudgingly gave in after Mako issued a statement saying marriage was “a necessary choice” in November 2020.

Komuro returned to Japan in September as a Fordham graduate and employee at a New York law firm, but his casual ponytail caused a media frenzy as it was deemed “disrespectful.”

He visited Mako’s parents earlier this week in a dark suit and tie, ponytail shorn. Tabloids still sniped he arrived late due to traffic jams.

After their Tuesday marriage, Mako—who has never had a surname or held a passport before—will prepare to move to New York.

“As a father of daughters, I think it must be quite painful for her father to recognize an unblessed marriage,” said Yoshinori Okabe, 63, a dentist.

But Chiaki Kadota, 29, said it was a private matter: “I personally think it’s better to leave them alone.”