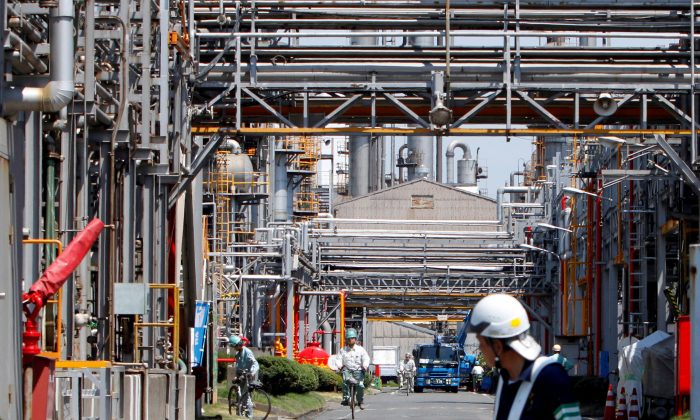 Workers ride bicycles as a guard looks on at a factory in Keihin industrial zone in Kawasaki, south of Tokyo August 31, 2010. (Reuters/Toru Hanai).
Markets

Japan Factory Output Expands Most Since 2015, but Outlook Dims

TOKYO—Japan’s factory output grew the most in October since 2015, rebounding from a fall in the prior month caused by natural disasters, though manufacturers face a tough road ahead in the face of increasing risks from global trade frictions.

The 2.9 percent rise in output handily beat a median market forecast of a 1.2 percent increase, led by items such as factory conveyors, smartphone parts and cars. It followed a revised 0.4 percent drop in the previous month, posting the fastest month-on-month gain since January 2015.

Manufacturers surveyed by the Ministry of Economy, Trade and Industry (METI) expect output to rise 0.6 percent in November and increase 2.2 percent in December, data showed.

Economists expect factory output to rebound this quarter as supply constraints caused by natural disasters that crimped production and physical distribution taper off, paving the way for a recovery from a contraction in the third-quarter.

“This rebound should be considered a special factor. Given slowing global trade, Japan’s factory output may stall in the coming months.”

The ministry raised its assessment of industrial output, saying production is gradually picking up as a whole.

A recent batch of data such as retail sales bolstered the view that Japan’s third-quarter economic contraction was likely temporary.

Separate data showed Japan’s unemployment rate edged up to 2.4 percent in October from 2.3 percent in September, while the jobs availability eased to 1.62 jobs per applicant from 1.64 in September, a level last seen in 1974.

Japan’s aging and shrinking population has led to a tight job market, causing labor shortages and pushing up wages gradually as many companies scramble to attract workers.

Despite the solid economy and tight labor market, however, inflation is struggling to accelerate.

The Tokyo index is available a month before nationwide core CPI, and serves as a leading indicator of consumer inflation.

Japanese retail sales rose the most in 10 months in October as consumers shelled out more on fuel, cars, medicines and cosmetics, in a sign the economy is likely returning to growth after a summer stumble, data showed on Thursday.