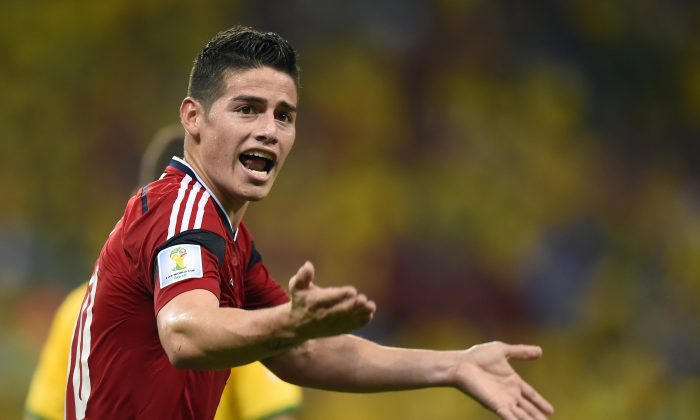 Colombia's midfielder James Rodriguez celebrates after scoring during the quarter-final football match between Brazil and Colombia at the Castelao Stadium in Fortaleza during the 2014 FIFA World Cup on July 4, 2014. (FABRICE COFFRINI/AFP/Getty Images)
Sports

James Rodriguez may be out of the World Cup, but his value is still soaring.

Spanish newspaper AS reports that the 22-year-old’s current club, A S Monaco, have placed a €80 million (about $108.7 million) price tag on their star midfielder.

Rodriguez is keen for a La Liga move, especially to Real Madrid, according to the Independent, and this could influence his club to lower their valuation of him by about €10 million at best.

As Monaco are interested in Alvaro Morata and Fabio Coentrao, a move of either to France in a swop move could bring down the value of Rodriguez.

The Colombian star signed a five-year contract last season, and cost Monaco €45 million ($61.2 million) to bring in from Porto.

James Rodriguez put Colombia back into the match against Brazil by scoring a late penalty Friday, but it wasn’t enough. The playmaker then broke down after his team lost 2-1 in the quarterfinals.

“We are sad, but we are so proud because we left everything out there,” Rodriguez said. “We gave everything to advance. Men also cry, especially when you feel like this.”

Brazil defender David Luiz, whose superb free kick turned out to be the deciding goal, tried to comfort Rodriguez, putting his arm around him. The players exchanged shirts and Luiz applauded Rodriguez as he slowly walked toward the tunnel.

Before he got there, Colombia coach Jose Pekerman gave him a hug.

“I tried to calm him down because he deserves huge congratulations,” Pekerman said.

At 22, Rodriguez had become the most feared man among Brazil fans. His six goals are two more than Brazil forward Neymar has managed and his 80th-minute penalty ignited a late surge in Fortaleza that made the home fans tense.

“He is an outstanding player, a huge talent, he has ambitions,” Pekerman said. “He has tried to do his best in a hard match. This is an elimination that leaves one of the best players in the World Cup out of the tournament.”

One of his goals against Uruguay in the second round has been described as among the best of the tournament, when he chested down the ball and volleyed it past the goalkeeper.

While Rodriguez couldn’t pull off a similar moment of brilliance to equalize against Brazil, there were glimpses of his talent. In a match that saw 54 fouls between both teams and many of them committed against Rodriguez, he was still able to drive forward and at times move past defenders with ease.

When Radamel Falcao was cut from Colombia’s final 23-man squad because he failed to recover from a serious knee injury, many thought the South American team would exit the tournament at the group stage. But a new Colombian star has emerged and big things will be expected of him.

“He will show in the future,” Pekerman said, “that he can be one of the best.”