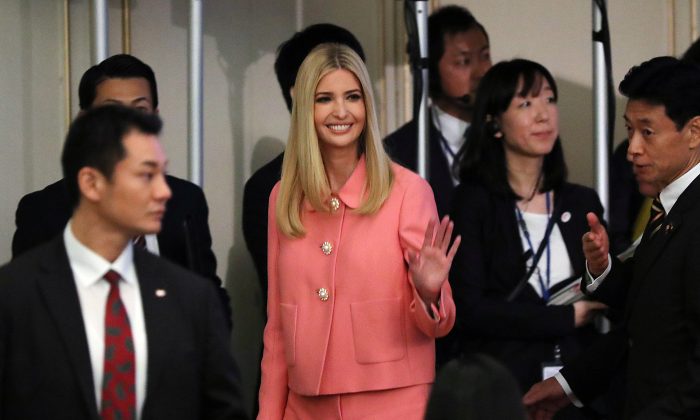 Ivanka Trump, the daughter and assistant to President Donald Trump, waves after delivering a speech at World Assembly for Women: WAW! 2017 conference Friday, Nov. 3, 2017 in Tokyo. (REUTERS/Eugene Hoshiko/Pool)
US News

TOKYO—Ivanka Trump, U.S. President Donald Trump’s daughter and informal adviser, told a summit in Tokyo on Friday, Nov. 3, that the world must boost women and minority participation in the fields of science, technology, engineering and maths (STEM).

Ivanka Trump, seen as an important influence on her father, has made women’s issues one of her signature policy areas since beginning her role at the White House. Her comments came ahead of her father’s trip to Asia – his first since taking office in January – that begins in Japan on Sunday, Nov. 5.

“Female and minority participation in STEM fields is moving in the wrong direction,” she said at the World Assembly for Women summit. “We must create equal participation in these traditionally male-dominated sectors of our economy.”

She said her father’s tax reforms – unveiled by Republicans in the U.S. House of Representatives on Nov. 2- would benefit American families.

“We are seeking to simplify the tax code, lower rates, expand the child tax credit, eliminate the marriage penalty, and put more money back in the pockets of hard-working Americans,” she told a meeting room in a Tokyo hotel.

Japanese Prime Minister Shinzo Abe said his government was aiming to mobilize women in Japan’s workforce and boost economic growth, launching policies such as improved childcare in his “Womenomics” program.

“We’ve put our full strength into creating an environment where it’s easy for women to work,” Abe said in an opening address to the conference.

“I really feel that Japan has come a long way,” he said.

Japan’s gender gap remains wide despite such efforts, with little progress made since Abe vowed at the United Nations in 2013 to create “a society where women can shine”.

Japan ranked 114 out of 144 in the World Economic Forum’s 2017 Global Gender Gap report – sandwiched between Guinea and Ethiopia and down 13 places since Abe took power.

Abe appointed only two women to ministerial posts in a Cabinet reshuffle in August, down from three and five respectively in his previous two cabinets. Only 14 percent of Japan’s lawmakers are women.

Men also dominate decision-making in business in Japan. Only 3.7 percent of Japanese-listed company executives were women at the end of July, according to the Cabinet Office, barely changed from 3.4 percent a year earlier.