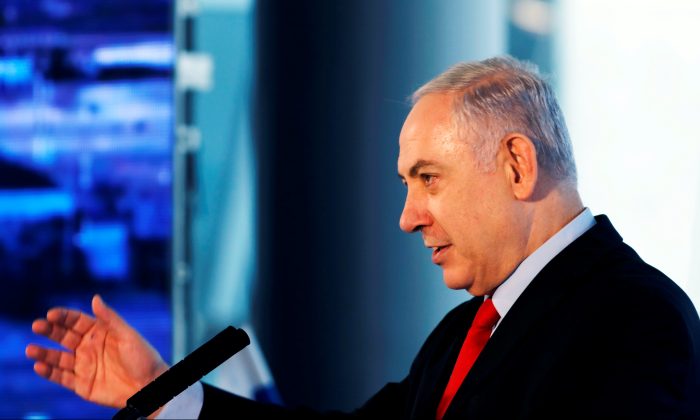 Israel’s Netanyahu Could Act Against Iran’s ‘Empire’ If Needed

MUNICH–Prime Minister Benjamin Netanyahu said on Sunday that Israel would act against Iran, not just its allies in the Middle East, if needed, reiterating that Tehran was the world’s greatest threat.

Holding a piece of what he said was an Iranian drone after its incursion into Israeli airspace earlier this month, Netanyahu told the Munich Security Conference: “Israel will not allow the regime to put a noose of terror around our neck.

#BREAKING: Netanyahu brings piece of Iranian drone to #msc18: Iranian tiger is on the prowl in the middle east" pic.twitter.com/WJc9in9IFi

Mr. Zarif, do you recognize this? You should. It's yours. You can take back with you a message to the tyrants of Tehran: Do not test Israel's resolve. pic.twitter.com/vSGpBNvuMD

Addressing the Munich event for the first time, Netanyahu urged gathered U.S. and European officials and diplomats to counter Iran immediately, displaying a map showing what he said was Iran’s growing presence in the Middle East.

He said Iran was increasing its power as the U.S.-led coalition against ISIS in Iraq and Syria regains territory from the terrorists.

#Netanyahu: #Iran trying to change ground rules in Syria. Israel resisting – “so far that has not worked.”
If #Assad invites Iran in, that changes our position.” (Towards Assad).
Clear warning to Iran and Assad not to change the status quo. pic.twitter.com/0oKHMsjr9d

“The unfortunate thing is that as ISIS compresses and Iran moves in, it is trying to establish this continuous empire surrounding the Middle East from the south in Yemen but also trying to create a land bridge from Iran to Iraq, Syria, Lebanon and Gaza,” Netanyahu said.

“This is a very dangerous development for our region.”

Tensions surged on Feb. 10 when anti-aircraft fire downed an Israeli warplane returning from a bombing raid on Iran-backed positions in Syria after Israel intercepted an Iranian drone in its airspace launched from Syria.

That was the most serious confrontation yet between Israel and Iranian-backed forces based across the border in Syria.