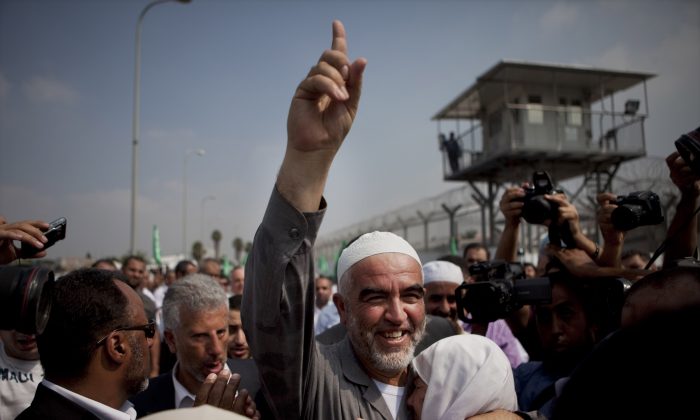 Sheik Raed Salah (C), the leader of the northern branch of the Islamic Movement in Israel, arrives at Ayalon Prison to serve his sentence at the central Israeli town of Ramle on July 25, 2010. Israel outlawed an Islamist party accused of inciting violence among the country’s Arab citizens, the government announced on Nov. 17, 2015, as part of its measures to stamp out a two month-long deadly escalation. (AP Photo/Oded Balilty)
Middle East

JERUSALEM—Israel on Tuesday outlawed a leading Islamic group it accuses of inciting Arabs to violence in its latest attempt to quash a deadly two-month wave of unrest.

The crackdown, which one senior politician tried to link to the global campaign against Islamic extremists following last week’s attacks in Paris, threatened to worsen already strained relations with the country’s Arab minority.

In a separate development, Israel also said it had approved the construction of hundreds of homes in a Jewish settlement in east Jerusalem.

The international community opposes Israeli construction in east Jerusalem, which Israel captured in 1967 and the Palestinians claim as their capital. This particular project, in the Ramat Shlomo area, has drawn American ire because it was first announced during a visit to Israel by Vice President Joe Biden in 2010.

Israel has repeatedly accused the northern branch of the Islamic Movement of fueling the past two months of violence. The group’s leaders, known for their fiery rhetoric, have spearheaded accusations that Israel is plotting to take over a sensitive holy site in Jerusalem. The accusations, which Israel strongly denies, have been at the heart of the recent unrest.

“The northern branch of the Islamic Movement in Israel is undermining the state,” said Prime Minister Benjamin Netanyahu. “We will continue to act against those who incite and who encourage terrorism, wherever they are.”

After the decision, police closed 17 organizations affiliated with the movement and raided more than a dozen of its offices, seizing computers, files and funds. Authorities also froze the group’s bank accounts, and the government said activists could be subject to arrest if they violate the ban.

The group’s leader, Raed Salah, said it would fight the measure and continue its mission. “All these measures done by the Israeli establishment are oppressive and condemned,” Salah said.

In a statement, the government said the movement is affiliated with the region-wide Muslim Brotherhood organization, has ties to the Palestinian militant Hamas group and is committed to Israel’s destruction to make way for a transnational Islamic “caliphate.”

Salah is set to start an 11-month jail term later this month in connection with incitement charges from a 2007 sermon.

According to an Israeli indictment, Salah called for a new uprising against Israel in that sermon and accused Jews in Europe of mixing children’s blood in Passover matza, a false accusation known as the “blood libel.”

He also allegedly said Muslims’ “finest moment” would be to become “martyrs” protecting the Al-Aqsa Mosque in Jerusalem. “The streets of Jerusalem will be purified by the blood of the innocents whose souls were taken by the Israeli occupation soldiers,” he is quoted as saying.

The current round of violence erupted in mid-September over rumors that Israel was trying to expand the Jewish presence at the hilltop compound that houses the mosque. The site is also revered by Jews as the home of the biblical Jewish Temples. Palestinians dismiss the incitement claims and say violence stems from frustration over nearly 50 years of Israeli occupation.

Salah’s deputy, Kamal Khatib, said the party condemned the Paris attacks and charged Israel with exploiting the timing to “punish the Islamic Movement.

The movement counts an estimated 20,000 members, but its support is much broader. Salah’s calls to protect Al-Aqsa resonate with large segments of the public, even those who are not religious, said Shaul Bartal, an expert on Palestinian affairs at Israel’s Bar-Ilan University.

“Al-Aqsa is a Palestinian national symbol. It’s not just a religious symbol, and he calls to defend it,” Bartal said.

The Islamic Movement has also gained popularity by running a network of charities, kindergartens, health clinics and social services—a model established elsewhere by the Muslim Brotherhood.

“They have filled the vacuum of the government services in the Arab communities,” said Wadea Awawdeh, an Arab commentator in northern Israel.

Members of Israel’s Arab minority, who make up about 20 percent of the population, have citizenship but suffer widespread discrimination in jobs, housing and social services.

Arab groups condemned Tuesday’s decision as another step by Israel to marginalize them. Early this year, Netanyahu outraged the community on election day when he urged supporters to get to the polls because Arabs were “voting in droves.”

Adalah, an Arab rights advocacy group, said the government’s latest action was a “violation and crackdown on the Islamic Movement’s rights to freedom of association and political expression, and harms the Palestinian-Arab minority in Israel as a whole.”

Alon Ben David, Channel 10 TV’s security analyst, said the ban was bound to backfire. “Outlawing them won’t remove the phenomenon called the Islamic Movement and only gives it more prestige,” he said.

In new violence Tuesday, the Israeli military said an army patrol came under fire in the West Bank. It said soldiers returned fire, killing a gunman and arresting two others.