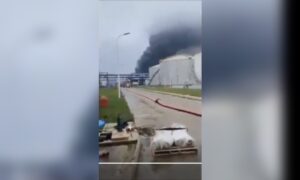 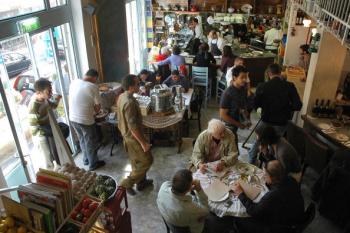 Genevieve Belmaker
Genevieve Belmaker is a former reporter and editor with The Epoch Times.
View profile
Follow
biggersmaller
Print
JERUSALEM—The art of conversation, both verbal and non, is of course practiced in every corner of the world. Here, conversation is not only practiced, it is so forceful and competitive that it should be an Olympic sport.

Israel, charming as it is with its lively inhabitants, also happens to be an unusually loud country. Without comparing to other places, it is worthwhile to examine Israel’s particular approach to conversation.

As I mentioned, this is a loud locale. To understand how loud, you have to include inanimate objects and nonverbal, yet audible, communication. Horns on vehicles hold a special position of importance. To honk a horn can mean many things: Get out of the way. Look out. Move. What are you doing, you idiot? Hello. Goodbye. It’s kind of like the Israeli version of Hawaii’s Aloha with its many meanings. The cacophony of sound from all the honking in the cities sends a clear message: nobody is paying much attention to anybody else.

Taxi drivers are particularly fond of honking. But that’s not surprising, since they almost always have a lot to say in general. I know more about the lives of random cab drivers than I do of my best Israeli friends. They seem especially talkative and eager to lay on their horns if you catch a ride with one late at night or when traffic is very heavy.

Talking with cab drivers (when they’re not honking) provides valuable cultural lessons. For example, if you really want someone in Israel to listen to you—TALK LOUDLY. It’s not about yelling or talking over the top of others. The key to being heard in Israel is to say exactly what you are thinking in straight, unvarnished language—at top volume.

This presents a particular challenge for me as an American from a part of the United States that places emphasis on linguistic dilly-dallies, pleasantries, and genteel expressions that convey a deep sense of apology for bothering the listener. I’m from a small town near Seattle, for the record.

That description might be a bit of an exaggeration, but I will recount a conversation between a waiter and myself early in my stay as an example. The following dialogue must be imagined in a rather hushed tone.

"Uhm, excuse me? I’m sorry, but do you think that you could please get me a little bit of milk to put in my coffee?"

The waiter stopped and stared at me for two beats.

“Yes, please, that would be great. Thank you.”

Three months later, I have learned there’s no use wasting breath on speaking in such a frilly, soft manner. In fact, it can come across as weak and naïve (as in, I just arrived here by plane last night and have no idea what’s going on). Here’s a version of how I communicate now. All of the following dialogue must be imagined two to three decibels louder than typical conversation among native English speakers.

“Hi, can I get some hot milk for my coffee?

Even though sometimes I still mistake normal conversation among Israelis as a verbal fistfight, I have learned how to turn on my “loud voice” to get things communicated. It’s not always easy to force my polite smalltown American self into the corner while I let loose in a heated debate about some inane topic with two or three Israelis. Sometimes I wonder what my mother would think if she could hear me.

But at least I’ve figured out that here there’s no need to be a wallflower—as long as you have a set of vocal cords or a horn, in Israel you can speak your mind freely and live to tell the tale.