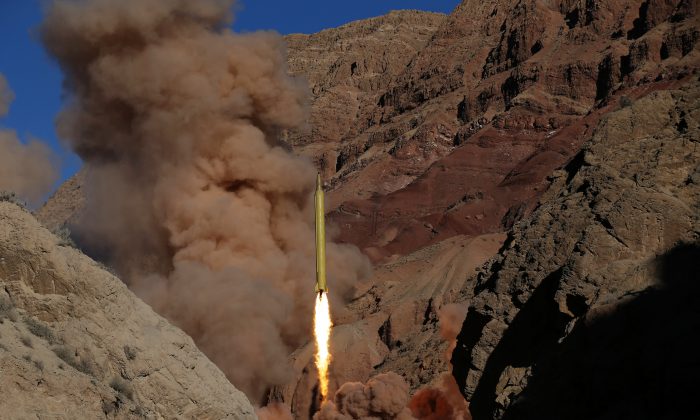 A Qadr H long-range ballistic surface-to-surface missile is fired by Iran's powerful Revolutionary Guard, during a maneuver, in an undisclosed location in Iran on March 9, 2016. (Omid Vahabzadeh/Fars News Agency via AP)
Middle East

JERUSALEM—Israeli Prime Minister Benjamin Netanyahu on Sunday called on world powers to punish Iran after the country test-fired two ballistic missiles emblazoned with the phrase “Israel must be wiped out” in Hebrew.

Netanyahu said he instructed Israel’s Foreign Ministry to direct the demand to the United States, Russia, China, Britain, France and Germany—the countries that signed the deal lifting sanctions on Iran in exchange for Tehran curbing its nuclear program.

Iran’s Revolutionary Guard test-launched the ballistic missiles last week, the latest in a series of recent tests aimed at demonstrating Iran’s intentions to push ahead with its missile program after scaling back its nuclear program under the deal reached last year.

Following last week’s missile launches, United Nations Secretary-General Ban Ki-moon called on Iran to “act with moderation,” and the U.S. ambassador to the United Nations said the launches were “provocative and destabilizing.”

The Israeli leader said world powers had pledged to prevent Iran from such violations. Speaking ahead of his weekly Cabinet meeting, Netanyahu said his demand for punitive action against Iran was “important as a test of the major powers’ determination to enforce the nuclear agreement with Iran and, of course, we expect their answers.”