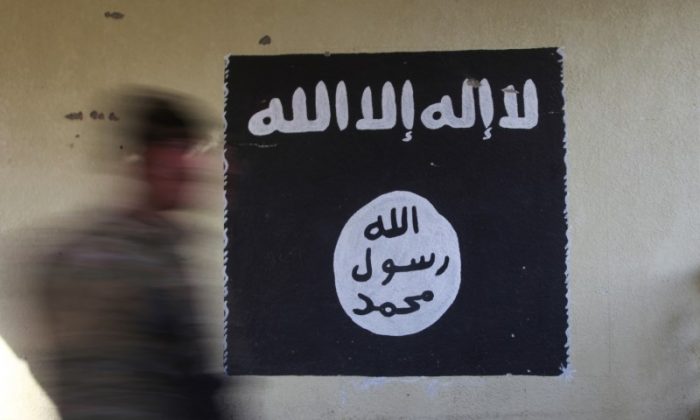 File Photo: A member of the Iraqi rapid response forces walks past a wall painted with the black flag commonly used by ISIS terrorists, at a hospital damaged by clashes during a battle between Iraqi forces and ISIS terrorists in the Wahda district of eastern Mosul, Iraq on Jan. 8, 2017. (Reuters/Alaa Al-Marjani)
International

BAGHDAD—The ISIS terrorist group is talking to al-Qaeda about a possible alliance as Iraqi troops close in on ISIS fighters in Mosul, Iraqi Vice President Ayad Allawi said in an interview on Monday.

Allawi said he got the information on Monday from Iraqi and regional contacts knowledgeable about Iraq.

ISIS split from al-Qaeda in 2014 and the two groups have since waged an acrimonious battle for recruits, funding and the mantle of global jihad. Zawahiri has publicly criticized ISIS for its brutal methods, which have included beheadings, drownings and immolation.

It is unclear how exactly the two group may work together, Allawi said.

ISIS blazed across large swathes of northern Iraq in 2014, leaving the Iraqi central government reeling. Baghdadi declared a caliphate over the territory the group controlled from the al-Nuri mosque in Mosul the same year, which also became a point of contention with al-Qaeda.

Last October, Iraqi security forces and Shi’ite volunteer fighters, commonly referred to as the Popular Mobilization Units teamed up with an international coalition, including the United States, to drive Islamic State from of Mosul and the areas surrounding the city.

The group has been pushed out of the half of Mosul that lies east of the Tigris River, but Iraqi soldiers and their allies are now bogged down in tough fighting in the narrow streets of the Old City of Mosul, west of the river, according to Iraqi security officials .

Islamic State has used suicide bombers, snipers and armed drones to defend the territory under their control. The group has also repeatedly targeted civilians or used them as human shields during the fighting, according to Iraqi and American security officials.

The militant group has lost ground in Mosul but still controls the towns of Qaim, Hawija and Tal Afar in Iraq as well as Raqqa, their de facto capital in Syria.

Even if ISIS loses its territory in Iraq, Allawi said, it will not simply go away.

“I can’t see ISIS disappearing into thin air,” Allawi said, referring to the group by a commonly used acronym. “They will remain covertly in sleeping cells, spreading their venom all over the world.”