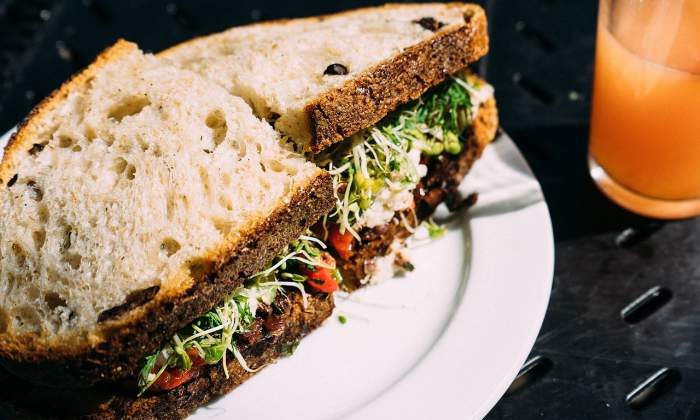 Is Your Sandwich Hurting Your Brain?

Sorry if the image made you want a sandwich. Not helpful.

This is an article about how regularly eating bread and other grain products affects your health, specifically the functioning of your brain.

It could equally have been named, Is Your High Carbohydrate Diet Making You Stupid?, but that would’ve only been half of the story.

It appears that our dietary over-reliance on bread and other gluten-containing grains (think wheat, barley, rye and spelt) has been doing us a mischief.

And it’s not just that grains are a source of unnecessary carbohydrate – it appears that grain foods serve up a double-pronged inflammation attack on your intellect.

So how exactly is the humble loaf of bread, once thought to be a healthy addition to diet, damaging our most prized organ? And how can we eat and live in a way that reduces our chances of developing cognitive decline conditions, and keeps us increasingly sharp?

Documentary maker, Max Lugavere, who has been hanging out with the world’s top doctors and experts in neurological health, has a thing or two to say on the subject. I interview Max about his upcoming movie, Bread Head, below.

But before we get to that, some background on how and why grain has fallen from grace so epically.

When Carbs Became the New Fat

The demonization of whole food groups is nothing new, and we should be cautious before making diet changes based on them. Dr Atkins, with his low carb, high animal fat diet, illustrated that. Even before carbs became a five letter dirty word, it was fat that was originally ostracized. We now know that that got us all into a hot mess with our health.

Although Atkins didn’t get the low carb diet quite right, the central premise – that carbohydrates make us fat – has stood the test of time. Research has demonstrated that low carbohydrate diets are more effective for weight management and many other markers of health.

Once understood to be pillars of a healthy diet, grains have come under nuclear scale attack in recent years.

First up we had Wheat Belly author, Cardiologist Dr William Davis, exposing ‘healthy wholegrains’ as genetically altered Frankenwheat imposed on the public by agricultural geneticists and agribusiness. That opened up a few eyes and ears.

Perlmutter delivered the message that challenging brain problems, including Alzheimer’s disease, other forms of dementia, depression and ADHD, may be prevented with lifestyle changes. And what are those? A low carbohydrate and gluten free diet, coupled with higher fat and aerobic exercise.

Perlmutter posited that: “It has become clear that gluten (a protein found in wheat, barley, and rye) and a high-carbohydrate diet are among the most prominent stimulators of brain-based inflammation.”

Bread and other grain products send our blood sugar skyrocketing

Evidence suggests that the damaging effects of eating gluten-containing grains are twofold:

Gluten is the primary protein found in grains like wheat, barley, rye and oats. Because it’s tricky to break down, gluten enters the small intestine undigested, where it causes intestinal irritation. This inflammation is disastrous to health.

Are all grains created equal?

In short, no. But not in the way you might think.

The whole ‘brown’s better than white’ is part of that same old paradigm that pedaled fat as being unhealthy for us.

This is not the part where I tell you that wholegrains are healthy. The whole ‘brown’s better than white’ is part of that same old paradigm that pedaled fat as being unhealthy for us.

Brown bread is probably an even heavier contender for our dustbins than its white counterpart, purely because we have been indoctrinated to think that it’s good for us.

In order of grain villainy, the heavily processed ones are the worst. Dr Perlmutter says it is clear that “structurally modified, hybridized grains contain gluten that’s less tolerable than the gluten that was found in grains cultivated just a few decades ago.”

Dr Mark Hyman, author of The Blood Sugar Solution, agrees: “This new modern wheat may look like wheat, but it is different in three important ways that all drive obesity, diabetes, heart disease, cancer, dementia and more. It contains a super starch, amylopectin A, that is super fattening, a form of super gluten that is super inflammatory, and [acts like] a super drug that is super addictive and makes you crave and eat more.”

There are healthier grains, though. And despite their high carbohydrate content, some of us may still want to include them in our diets (we will look at why below). In addition to rice (brown, white, red and wild), better grains are amaranth, buckwheat, millet, quinoa, sorghum and teff. There are more too.

2. Why Bread Ought to Taste Sweet

Most grain foods are 70% carbohydrate (that is, 70 grams of carbohydrate per 100 grams). That’s sugar. Your blood doesn’t know the difference.

Here is a label from an organic spelt product (spelt is wheat and contains gluten).

Every time we eat sugar that we don’t burn off, we form AGEs (Advanced Glycaemic End Products), which is one of the major causes of early onset ageing and degenerative disease (see my previous article on ageing). Your brain suffers in a particular way when you eat sugar, which I explain more below.

Research shows that when we eat grains, our brain function decreases, we can develop brain damage over time and our IQ can even lose a few points. It’s understood that we have lost 10% of our brain mass since the dawn of agriculture.

1.  Your Brain on Gluten

Dr Maios Hadjivassiliou of the UK, a recognized world authority on gluten sensitivity, has reported that “gluten sensitivity can be primarily and at times, exclusively a neurological disease.”

Here are two specific ways that eating grains appears to damage the brain:

We develop toxic antibodies: It is understood that we form specific antibodies to gluten molecules. The formation of one of these antibodies, GAD, is implicated in type I diabetes, adult auto-immune diabetes and Parkinson’s disease. The main neurological disorder believed to be at least partly caused by gluten is a disease that involves an inability to coordinate balance and problems talking. I know – sounds like you on a Friday night.

2. Excess Carbohydrates and Your Brain

Most of us already knew that too much sugar helps to make us fat and give us bad skin.

Endocrinologist Dr Medha Munshi has said research “offers more evidence that the brain is a target organ for damage by high blood sugar.”

Here are some specific ways that a diet that is excessively high in carbohydrates has been linked to brain detriments:

Resistance to insulin: Insulin, the hormone that controls blood sugar levels, regulates the function of brain cells, too. Insulin strengthens the synaptic connections between brain cells, helping them to communicate better and thereby form stronger memories. So when insulin levels in the brain are lowered as the result of excess sugar consumption, cognition can be impaired.

Affects our learning and memory: Prorogued high blood sugar levels affects the production of a chemical known as brain-derived neurotrophic factor (BDNF). Without BDNF, our brains can’t form new memories and we can’t learn or remember much of anything.

Neuroscientist, Suzanne de la Monte MD, was the one to coin the term.

Brain cells use glucose as fuel, and insulin instructs the cells to mop up glucose in the blood. De la Monte’s big insight was that brain cells can develop insulin resistance, just like other cells in the body.

Her research has revealed that this creates a toxic environment for the brain, leading to the harmful buildup of proteins and neuron death seen in Alzheimer’s.

In addition to telling us more about how Alzheimer’s can be prevented through healthy diet and exercise, her insights could also help potentially treat the disease.

Max Lugavere interviews Suzanne as part of his documentary.