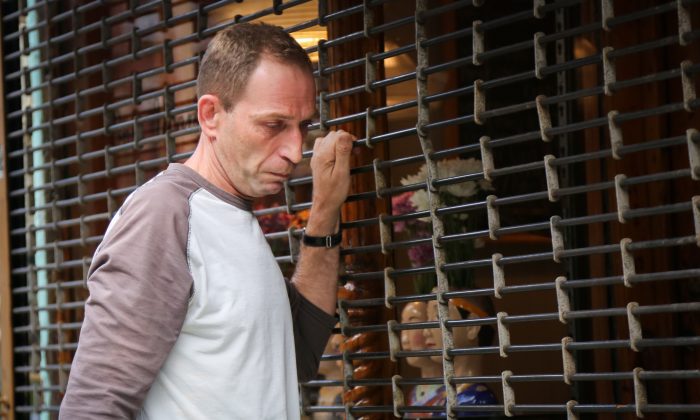 Jerome Audureau closes the gate for his bakery, Once Upon a Tart for the last time after 23 years in SoHo, Manhattan, on Aug. 23, 2014. (Benjamin Chasteen/Epoch Times)
New York

Is There Room for Small Businesses in NYC?

'Once Upon A Tart' Comes to an End
By Catherine Yang, Epoch Times
Share
FacebookFlipboardTweetRedditEmail
MOREPRINTFONT BFONT S

NEW YORK—Twenty-three years ago, Once Upon A Tart was one of three establishments to open on Sullivan Street in SoHo, a working class family neighborhood at the time. Over the years, owner Jerome Audureau has been proud to create a community hub where senior regulars who cannot afford to go anywhere else feel just as welcome as Meg Ryan and Brad Pitt.

Now, crippled by costs, the community is losing their go-to place to catch up with neighbors. On Saturday evening, Audureau closed the doors to Once Upon A Tart for the last time.

Saturday at lunch, Audureau was busy with hugs and handshakes as neighbors from all walks of life streamed in with well wishes and condolences. Patrons were nothing short of heartbroken as the reality of the closing set in.

Danielle Nazinitsky, who runs the neighborhood blog SoHo Strut, said the shop was one of the few neighborhood spots left in SoHo.

Customers sit outside of the bakery Once Upon a Tart on its final day before permanently closing for good in SoHo, Manhattan, on Aug. 23, 2014. (Benjamin Chasteen/Epoch Times)

Simon Nuchtern reminisced about taking a photo of opening day of the bakery 23 years ago, and asked to do the same with Audureau on his last day.

“We’re a very tight community,” Nuchtern said. Everyone knows you, the patrons say and the staff feels like family.

George Kyriakos lives around the corner from Once Upon A Tart, and has had more eventful moments at the establishment than he can count.

“I’ve had breakups here, meetings, dates—my engagement,” Kyriakos said, his daughter Ana sitting across from him at a table by the front doors of the bakery. “She’s been coming here since she was a baby.”

Ana Kyriakos often walked by Once Upon A Tart to go to school. She recalls spending many childhood summers behind the counter of the bakery eager to help (only to be stuffed inside an empty trash can by Jerome, she adds).

Long time customer Ana Kyriakos gives Once Upon a Tart owner Jerome Audureau a hug on the last day of business for his bakery. (Benjamin Chasteen/Epoch Times)

Even before the doors of the bakery had officially opened, his neighbors were taking care of him like family, Audureau said, adding an impression of “Angela from upstairs,” the Italian woman who brought lunch, Sambuca, and coffee to him and the friends and family members he rounded up to help with renovations.

“This is so sad,” Audureau said after many an exchange with a customer. “The community is losing something that is for them.”

His windows were filled with amusement and a personal touch. He had decorated them for the last time as a grassy scene peppered with colorful birds that, when he claps his hands loudly, burst into twitters and chirps. “That’s just my craziness,” Audureau said.

For 23 years, he has changed his windows once a month, just to see the joy in the faces of his passersby.

“This is not just a place to get food or coffee, this is also a sense of—it’s entertainment.”

In the four days before the closing, nearly 800 people from a few blocks around the bakery signed a petition calling for support to keep Once Upon A Tart open.

A Series of Burdens

After September 11, blocks of Sullivan Street around Audureau’s bakery were closed for weeks.

“The people had nowhere to go,” Audureau recalled. It was a devastating time. So he provided his neighbors with free food for a whole month. His insurance gave him nothing.

When Hurricane Sandy hit, Audureau lost everything inside the store, and two weeks of business. He was insured for up to $83,000 in damages, but only received $7,000 in the aftermath—half of which went toward taxes.

Jerome Audureau assists a customer on the final day of his bakery Once Upon a Tart in SoHo, Manhattan, on Aug. 23, 2014. (Benjamin Chasteen/Epoch Times)

A week later, his insurance company refused to renew his insurance. Now he pays nearly twice as much, $9,000, and is covered for next to nothing. No one would give him a loan.

Rents have increased tenfold since Once Upon A Tart opened, but that is not nearly the biggest issue, Audureau said. For years he’s taken a salary of about $12,000, in order to sustain his community hub. Yet last year’s Health Department fines—largely for non-health related issues that have risen in cost over the years—was more than twice his salary: $27,000. The pressure of inspections—there were 11 last year—is just as draining as the bill.

The rising costs of expenses, fines, insurance, rents, and lack of political support has caused many small businesses like Audureau’s to close. Food establishments are especially affected, since the profit margins are slim to begin with.

“I want to use fresh fruits and fresh ingredients,” Audureau explained, gesturing toward the seasonal menu. Frangipane pear tarts in the summer and pumpkin scones in the winter, for instance. “But I’m not going to charge $5 for a muffin,” he said.

An application for a liquor license was the bakery’s last hope. Audureau and the restaurant next door had plans to partner, keep the bakery’s name, and expand its offering. But the license application was denied last month.

Jerome Audureau closes the gate for his bakery, Once Upon a Tart for the last time after 23 years in SoHo, Manhattan, on Aug. 23, 2014. (Benjamin Chasteen/Epoch Times)

His story is common among restaurateurs in neighborhoods where community boards favor quiet streets at night over the possibility of a noisy bar. Community Board 2, which covers Once Upon A Tart, frequently votes against liquor licenses unanimously.

There is a petition Audureau is asking his patrons to sign, but “it is just for my own satisfaction,” he said. “I’m a baker, not a politician.”

He may not even send the petition to anyone, Audureau said, as every politician and office he reached out to post-Sandy was unable to refer him to any sort of assistance.

Century-Old Bakery Comes to a Close

What this says to small business owners like Audureau is that New York is no longer the place for them. At the age of 21, Audureau came to New York City with just $2,000. He worked for a hotel management corporation until he felt sick of it, and turned his attention toward vegetable tarts. No one was making them, or making them well, he thought, and so he entertained the idea of a bakery.


On a bike ride through SoHo, he passed a gated storefront on Sullivan Street with a big rental sign—probably the only thing he could afford at the time—and came back the next day with the broker. He discovered that behind the gates was a bakery that opened in 1905 and had been shuttered around 15 years before, with many keepsakes from the previous owners still neatly wrapped in the basement.

Back then in 1992, there were just two other shops on the street. Now Once Upon A Tart gets a constant stream of tourists, celebrities, and neighborhood residents who come on a daily basis, said Daniel Bellino-Zwicke, one of those daily patrons.

“It was the American dream,” Audureau said, “but it doesn’t exist anymore.”