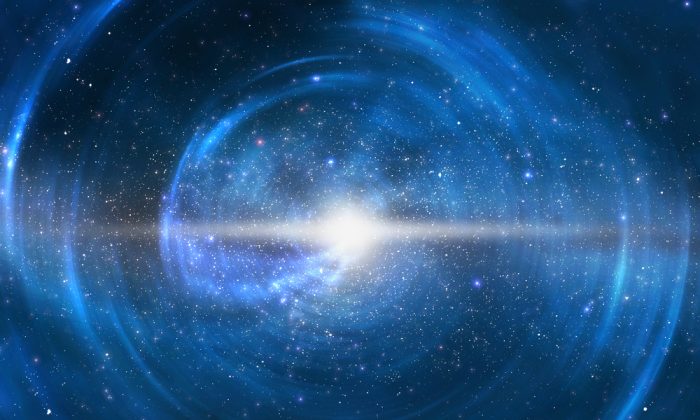 Illustration of a star exploding. Does the universe go through the same cycle of birth, life, and death that we observe on Earth and in the stars? (Shutterstock*)
Beyond Science

Is the Universe Dying? Will It Be Reborn?

We can see on Earth and off the Earth—in the stars, for example—a cycle of birth, stasis, degeneration, and death.

The universe is expanding and it is unclear what the result of that expansion may ultimately be.

Some physicists believe our universe, and perhaps other universes, may be subject to a cycle of life and death.

Paul Steinhardt, professor of physics at Princeton University, and Neil Turok, director of the Perimeter Institute in Ontario, Canada, have hypothesized that our universe is one of many. These universes can bang into each other, creating phenomenon such as the Big Bang, which is thought to have formed the known universe.

Their theory is partially based on superstring theory. They are quoted in the description of their book, “Endless Universe Beyond the Big Bang”: “[We] contend that what we think of as the moment of creation was simply part of an infinite cycle of titanic collisions between our universe and a parallel world.”

Closer to home, some believe the Earth and human civilizations go through a similar cycle.

Klaus Dona has traveled the world to research artifacts that don’t seem to have any proper place in history.

He toured with a collection of such artifacts to draw attention to what he says are pieces of evidence that our current understanding of history may be incorrect—pieces usually stuffed away in museum basements.

In an interview with Russell Scott on “West Coast Truth,” Dona spoke about his findings. For example, he has studied petrified cultivated fruits and vegetables, the bones from a human hand, and a stone plate in Villa de Leyva, Colombia, dated to be 120 million to 140 million years old.

“The official story is the story you learn at school, that the oldest civilizations are approximately 6,000 years [old],” he said. Primitive humans are thought to only have come to the Americas from Asia during the last ice age, about 15,000 years ago.

As to his view of history: “I think we had several times a very big catastrophe.” He says the advanced civilizations were wiped out, humans again lived a primitive life, and eventually civilization again emerged.

Peruvian stones that are thought to have been carved millions of years ago depict modern devices, such as a telescope, and modern clothing.

*Image of a star exploding via Shutterstock