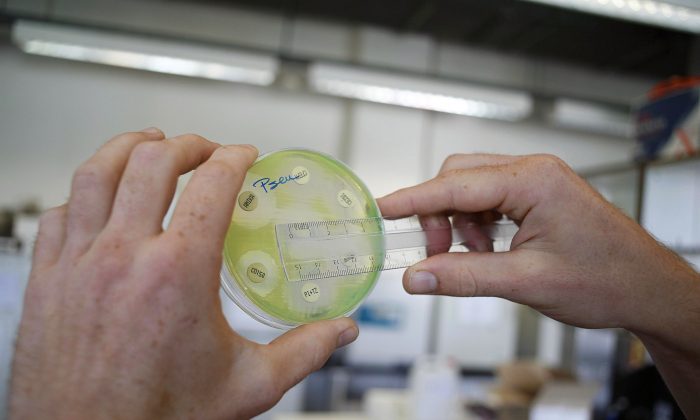 Researchers in China recently found E.coli bacteria that are resistant to the antibiotic colistin, often called the antibiotic of last resort. While experts have been warning that the finding heralds a post-antibiotic era what is concerning health care professionals is that the circle of DNA that makes the bacteria resistant to colistin can be passed on to other strains of harmful bacteria.

This circle of DNA, known as MCR-1, was found on a circular structure of DNA known as a plasmid. Plasmids carry “optional extras” for bacteria: genes that are not essential for survival but can provide a benefit. In this case, surviving in the presence of colistin. Some plasmids can be copied and passed on to other bacteria, giving them the optional extras.

The researchers in China believe that the resistant E.coli bacteria—first discovered in pigs and meat products—evolved the ability to withstand colistin as a result of their intensive use in animal-feed.

Colistin is largely used to help treat antibiotic resistant infections by making the bacterial cell membrane easier for antibiotics to cross. It can kill bacteria by itself, but it is most often used in conjunction with other antibiotics.

When bacteria, such as E.coli, are constantly exposed to colistin, those that have no defence, die. Those that gain resistance to the antibiotic, through natural mutation of DNA during cell division, survive and pass on those beneficial changes to the next generation. So you end up with a population of organisms all resistant to the antibiotic.

Bacteria that become resistant to colistin can do so in different ways. Colistin could no longer stick to bacteria, the cell membrane could be more resistant or the antibiotic could be ejected back out of the cell by the bacteria.

Some Are Strengthened, Others Weakened

In our own research at Nottingham Trent University we have exposed bacteria to the same antibiotic and had resistance occur in some cases, but not in others.

We, and many other groups, have studied the process of how bacteria become resistant to colistin, and created resistant strains over weeks of exposure to the antibiotic and other antibacterials.

As some disinfectants work in a similar fashion to colistin we wanted to know if exposure to disinfectants at home or in hospitals might lead to resistance to colistin. In the mutants that were generated, some were able to invade human cells better than before, but others lost the ability to invade at all. So I would like to know what other changes have been seen in the bacteria reported by the researchers in China.

I remember, ruefully, that the first colistin resistant bacteria I studied had a much tougher cell membrane, but because of this rigidity, had a tendency to die when I stored them in freezing temperatures. Their rigidity, that was so useful against colistin, meant they effectively shattered at very low temperatures. So the development of resistance to colistin may have affected the bacteria discovered by the team in China in other ways – ways that are more harmful to the bacteria than beneficial.

This is also not the first time that use of antibiotics in farm animals has led to bacteria that could cause antibiotic resistant infections in humans.

However, the speed at which the bacteria acquired resistance is the most alarming aspect of this latest finding. A single interaction between a resistant and a non-resistant bacteria can now result in two resistant organisms as the plasmid is copied and passed from one bacterium to another.

Up to now, bacteria that have developed resistance to colistin would have needed to have been exposed to the antibiotic for a long time before a resistant strain evolved. Plasmid-carried resistance is much more rapid. This is not the slow creep of accumulated changes, but the transfer of the entire set of genes required for resistance in one go.

This plasmid transfer of a resistant gene has been seen for some time with many other antibiotics, including those that colistin is used in conjunction with but, until now, not with colistin itself.

Plasmids are “expensive” for a bacteria to carry as they use a lot of energy, so there has to be a driving force killing off the non-plasmid-carrying bacteria so the population passes on this ability generation to generation. The new research) suggests that the use of colistin in farm animals in areas the bacteria were isolated from, is the likely cause, as the bacteria would be constantly exposed to colistin, with only those carrying the plasmid surviving. This is also not the first time that use of antibiotics in farm animals has led to bacteria that could cause antibiotic resistant infections in humans.

Colistin to treat farm animals is rarely used in Europe. However, air travel and bacteria’s notorious disregard for national boundaries means it’s only a matter of time before we see one of these strains arriving here.

I would be interested to see what degree this plasmid is retained within the bacterial population in areas where colistin is not commonly encountered, or whether the genes move into the bacterial chromosome so becoming a standard part of the bacteria, not just an optional extra.

This is a reminder that, when it comes to resistance, it is not just about what antibiotics are prescribed locally, but their use at a global level. Antibiotic resistant infections are a worldwide issue, and the response to them should be at a similar scale.

Michael Loughlin is a senior lecturer at Nottingham Trent University in the U.K. This article was previously published on TheConversation.com.