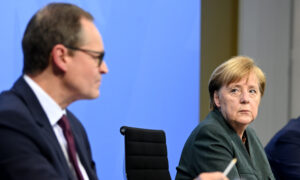 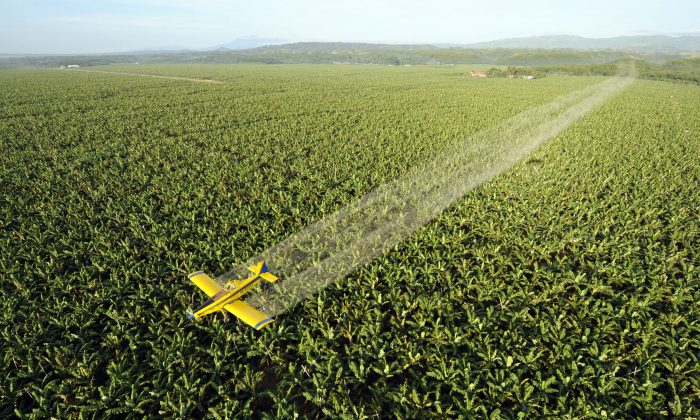 A crop duster plane spraying fungicide to protect the 7,000 hectare banana plantation of Tagum Agricultural Development Co. from destructive leaf virus in Tagum in Davao del Norte province, located in the southern Philippine island of Mindanao, on April 22, 2008. Farm chiefs have a narrowing chance to diversify vital crops at rising threat from drought, flood and pests brought by climate change, food researchers warned on Oct. 3, 2011. The world's nearly seven billion people are massively dependent on a dozen or so crops that, thanks to modern agriculture, are intensively cultivated in a tiny number of strains, they said. (Romeo Gacad/AFP/Getty Images)
Health News

At the end of October 2015, the Brazilian state of Pernambuco, located in the northeast of the country, started reporting a dramatic increase in the number of babies born with microcephaly, a condition characterized by a shrunken head and brain. The cases in Pernambuco were soon followed by similar ones in the nearby states of Bahía and Paraíba.

The cases of microcephaly seemed to be connected to an outbreak of the Zika virus, first recognized in Uganda in the 1940s. Zika is transmitted by Aedes aegypti, a species of mosquito that thrives in stagnant water pools. In the same way as malaria, dengue, and Chikungunya, the Zika virus infection results in similar symptoms: fever, joint pain, and rashes.

Thus, ominously, parallel to the increased number of pregnant women infected with the Zika virus there was an increase of microcephaly cases in their children. Because CT scans of those babies’ brains showed signs of calcification usually associated with an infectious disease rather than a genetic abnormality, many experts thought that their microcephaly was caused by the Zika virus.

Although a causal link between Zika infection in pregnancy and microcephaly has not … been established, the circumstantial evidence is suggestive and extremely worrisome.
— Dr. Margaret Chan, director-general, WHO

However, Dr. Margaret Chan, director-general of the World Health Organization (WHO) suggested caution. “Although a causal link between Zika infection in pregnancy and microcephaly has not, and I must emphasize, has not been established, the circumstantial evidence is suggestive and extremely worrisome,” she said.

Dr. Chan’s opinion was echoed by Dr. Patricia Pestana Garcez, a neurodevelopment expert who studies microcephaly at the Federal University of Rio de Janeiro in Brazil. Pestana said, “There is no direct evidence that the virus causes microcephaly.” However, she added that circumstantial evidence was strong enough to advise everybody not to take chances.

At the same time that the role of the Zika virus in the production of microcephaly in children was being studied, some environmental activists called attention to the role of pesticides as the possible cause for this abnormality in children.

Environmental activists have been calling attention to the role of pesticides as the possible cause of microcephaly in children.

Many experts and environmental activists alerted on how some agricultural chemicals—such as paraquat, which has been classified as “highly poisonous” by U.S. regulators—that have been banned or phased out in leading industrialized nations, continue being extensively used in many developing countries, notable Brazil. They are particularly used in Brazil’s north-east, where almost a third of cases of microcephaly have occurred so far.

In the last few years, Brazil has become one of the top exporters of orange juice, sugar, coffee, beef, poultry, and soybeans. Brazil’s huge production of those items is probably due, in part, to the extensive use of pesticides, many of them highly toxic to humans.

According to WHO, at the global level, there are over three million cases of pesticide poisoning each year and more than 220,000 deaths, mostly in developing countries.

According to WHO, at the global level, there are over three million cases of pesticide poisoning each year and more than 220,000 deaths, mostly in developing countries.

Exposure to some pesticides can cause a wide range of health problems such as memory loss, loss of coordination, behavioral effects, and reduced motor skills. In addition, they may cause asthma, allergies, cancer, hormone disruption, and problems with reproduction and fetal development, such as microcephaly. Children are at greater risk of exposure to pesticides because of their small size and that their immune system is not fully developed.

Children are at greater risk of exposure to pesticides because of their small size and that their immune system is not fully developed.

Given these toxic effects of pesticides and that they are more heavily used in Brazil’s northeast region, it is not unreasonable to think that, at least in some cases, microcephaly may be due to excessive use of toxic pesticides and that these effects, have been unmasked by the Zika virus infection. It is also possible to think that microcephaly in children may have a multi causal origin.

This situation poses the need to urgently investigate more thoroughly the effects of both the Zika virus and pesticides in causing microcephaly in children, and for the public health authorities of the countries most threatened by this virus to coordinate actions for the more effective control of the epidemic.