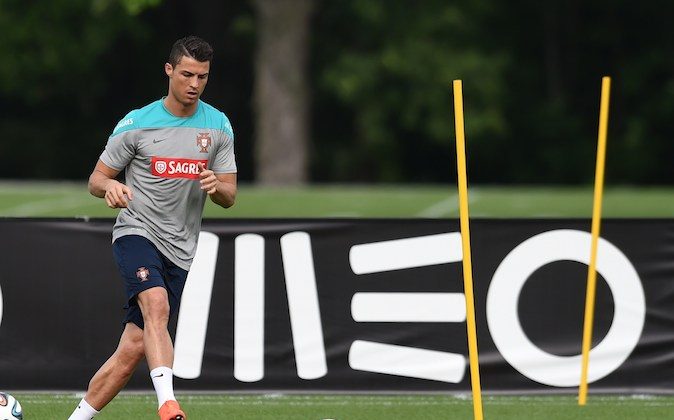 Portugal's Cristiano Ronaldo during training June 8, 2014 in Florham Park, New Jersey. The team will be training at the New York Jets training facility during a stop on their way to the World Cup in Brazil. (TIMOTHY A. CLARY/AFP/Getty Images)
Soccer

Ireland will go head-to-head with Portugal in an international friendly match on Tuesday, June 10.

In the United States, the game will be shown on beIN Sports en Español, beIN Sports USA, and Univision Deportes

Portugal captain and Real Madrid superstar Cristiano Ronaldo could be set to make his return from injury in Portugal’s final pre-World Cup friendly match against the Republic of Ireland on Tuesday.

The 29-year-old forward had to miss Portugal’s first two friendlies against Greece and Mexico due to tendonitis and a thigh problem, but has since returned to training last Friday.

Pepe, Ronaldo’s Real Madrid team mate, is still out with a leg injury, as is midfielder Raul Meireles with a muscular issue.

Portugal coach Paulo Bento will hope that his side can put on a better display against Ireland, as they drew 0-0 with Greece and narrowly beat Mexico 1-0 in injury time.

Indeed, Ireland will be a hard team to break down.

Martin O’Neill’s side are not World Cup bound, but they have held World Cup teams Italy (0-0) and Costa Rica (1-1) in their two recent friendlies, and will certainly hope to frustrate Bento’s side.