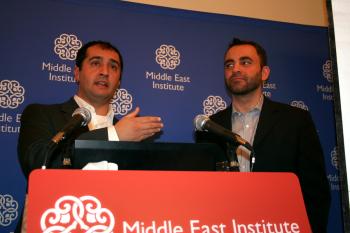 Iranian scholars Alex Vatanka (l) and Ali Alfoneh (r) explain the dynamics of the standoff between the regime and its opposition. They spoke Feb. 3 at the Middle East Institute in Washington, D.C. Mr. Vatanka is currently at MEI and Mr. Alfoneh is a visiting research fellow at the American Enterprise Institute. (Gary Feuerberg/The Epoch Times)
Middle East

Iranian Opposition in Standoff With Regime

Gary Feuerberg
View profile
Follow
biggersmaller
Print
WASHINGTON—On Feb. 11, Iran will celebrate the 31st anniversary of the Islamic revolution, which will afford an opportunity for the regime’s opposition, the Green Movement, to come out and demonstrate in large numbers. Since the disputed June 12, 2009 presidential election, both the pro-regime and opposition sides have been using various means of persuasion to try to dominate the other. Neither side is backing away.

Two Iranian scholars, Alex Vatanka and Ali Alfoneh, were invited Feb. 3 by the Middle East Institute (MEI) to give their interpretations on how this struggle will play out in the weeks ahead.

The situation as Iranians prepare for the Feb. 11 anniversary is quite tense. The regime has begun carrying out its first executions resulting from a mass trial held in August. Two men were hanged recently and nine more are slated for execution.

The loser in the presidential election, Mir Hossein Mousavi, has accused the regime of being “tyrannical,” resembling the Shah’s rule that the Islamic Republic overthrew in 1979. Instead of staying above the fray and trying to diffuse the tensions between the two sides, Supreme Leader Ayatollah Ali Khamenei has taken the side of the Admadinejad camp, calling the protesters “hooligans,” as thousands have been arrested and dozens killed by the Bajic militias.

Alex Vatanka is a scholar at the MEI, who specializes in the geopolitics of the Middle East. He is editor of the Jane’s Islamic Affairs Analyst and is a senior fellow in Middle East Studies at the U.S. Air Force Special Operations School.

Ali Alfoneh is a visiting research fellow at the American Enterprise Institute. He spent a year in Tehran at the Institute for Political and International Studies as an independent researcher. During this time Alfoneh acquired his expertise on the Islamic Revolutionary Guard Corps (IRGC).

Vatanka said it is important to understand that erosion of support has been a consistent feature of the Islamic Republic since 1979. The “reformers” versus “hardliners” is not something new. “Intra-regime rupture has always been present, but its current intensity [following the June 2009 election] is unprecedented.”

But this confrontation did not happen all of a sudden, according to Vantaka. The stage was set for the current crisis as early as the 2004 parliamentary elections when the Guardian Council disqualified two thirds of the candidates, most of which were “reformers.”

Vantanka laid special emphasis as an explanation for today’s crisis on the 2005 presidential election when the hardliners, the Admadinejad faction, “went after one individual,” the cleric-politician Akbar Hashemi Rafsanjani, who was president of Iran 1989-97.

“Going after Rafsanjani changed the equation and made the reformists opposition much greater than it used to be,” said Vantanka. By the 2009 election, the opposition had become “much more vocal and instinctively capable.” Meanwhile, conservatives and original supporters of the Islamic revolution, like Rafsanjani, found themselves being pushed into the opposition camp.

The BBC provided, June 9, 2009, another explanation for the unpopularity of the Khamenei rule, namely its undemocratic tendencies and human rights abuses: “In recent years, the hardliners have used the judicial system to undermine reforms by imprisoning reformist personalities and journalists and closing down reformist papers.”