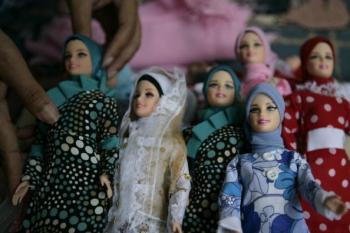 By Stephen Jones
biggersmaller
Print
Aside from the threat of nuclear war with Israel on top of trade sanctions from the EU, the Iranian government has another potent threat to its rule–Barbie.

Action figures of the blonde, curvaceous doll and her long-term hubby Ken are smuggled into the country in droves and have become immensely popular with Iranian children.

In the town of Qom earlier this month, a respected Imam, Ayatollah Reza Ostedi warned that Western toys would corrupt children. He singled out Barbie, with her uncovered hair and bare shoulders, as encouraging “bad hijab” habits.

“Barbie is an emissary of nudity and promotes the moral corruption and consumerism of the West,” the hardline Kahyan newspaper wrote in an editorial last year. “It is produced with the evil intention of destroying the identity of freedom-seeking nations.”

In April, Ayatollah Dorri Najafabadi wrote to Iran’s vice president to call for a ban of Western computer games and toys which have a “corrosive effect” on children. No measures have been announced as of yet.

Six years ago a rival to Barbie and Ken–called Sara and Dara–was launched in the Shi'ite Islamic Republic. The costumes available for both dolls were said to be culturally sensitive and each Sara doll came with a white veil.

The dolls were introduced by a government agency–the Institute for Intellectual Development and Young Adults. They were commissioned by the country’s Supreme Cultural Revolution Council to create dolls to stem the “western cultural onslaught.”

However, they are often more expensive than the smuggled Barbie and Ken dolls that are sold in almost every toy shop. They are also less popular.

“They are expensive and families prefer imported dolls given the dissatisfactory quality of Sara and Dara dolls,” Ali Bouzari, a children’s books illustrator, told The National newspaper in Abu Dhabi. “I have never seen any child playing with them.”

“If the idea of promoting the dolls was for them to replace Barbie and Ken dolls, it has not been successful. Barbie and Ken are representatives of modern American girls and boys. Sara and Dara, the way they are presented, don’t play the same role in our society,” Bouzari said.

“All the dolls have identical faces and only their clothes change. Iranian children, even in the remotest places, don’t usually dress in ethnic costumes that come with the dolls. Unless a child is from the same ethnic background and has been exposed to related traditions, she or he will find it too difficult to identify with them,” he said.

”We must first address the question of whether such traditions still play an active role in the life of the children today.”