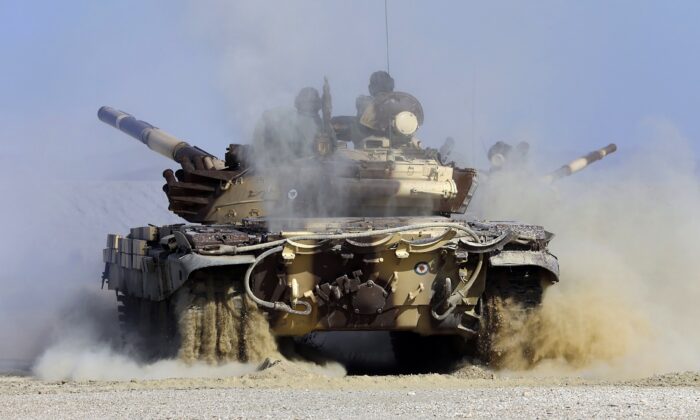 A tank moves during a maneuver in a coastal area of southeastern Iran on Nov. 7, 2021. (Iranian Army via AP)
Middle East

TEHRAN, Iran—Iran’s military began its annual war games in a coastal area of the Gulf of Oman, state TV reported Sunday, less than a month before upcoming nuclear talks with the West.

The report said navy and air force units as well as ground forces were participating in a more than 1 million square-kilometer (386,100 square-mile) area east of the strategic Strait of Hormuz.

Nearly 20 percent of all oil shipping passes through the strait to the Gulf of Oman and Indian Ocean.

State TV said brigades including commandos and airborne infantry deployed for the annual exercise. Fighter jets, helicopters, military transport aircraft, submarines, and drones were also expected to take part in the drill. It wasn’t immediately clear how long the exercise would last.

U.S. officials said last week that Iran had seized a Vietnamese-flagged oil tanker in the Gulf of Oman last month and was still holding the vessel in its port.

Iran offered conflicting accounts of what happened, claiming that Revolutionary Guard commandos had thwarted a U.S. seizure of a tanker carrying Iranian oil in the Gulf of Oman and freed the vessel. It aired dramatic footage on state television but did not further explain the incident.

Under the nuclear deal, known as the Joint Comprehensive Plan of Action (JCPOA), Iran would limit its nuclear development in exchange for sanctions being lifted.

Then-President Donald Trump withdrew the United States from the nuclear deal in 2018 and restored sanctions on Iran.

Trump has consistently called it the “worst deal,” citing that the deal only “delays” but doesn’t prevent a possible nuclear weapons program in Iran and that approximately $100 billion of Iran’s internationally frozen assets would be released, which might enable Tehran’s terrorism and insurgency.

Iran says its stockpile of 20 percent enriched uranium has reached over 210 kilograms (463 pounds), the latest defiant move ahead of upcoming nuclear talks with the West.

After months of delays, the European Union, Iran, and the United States announced last week that indirect talks to resuscitate the deal would resume Nov. 29 in Vienna.