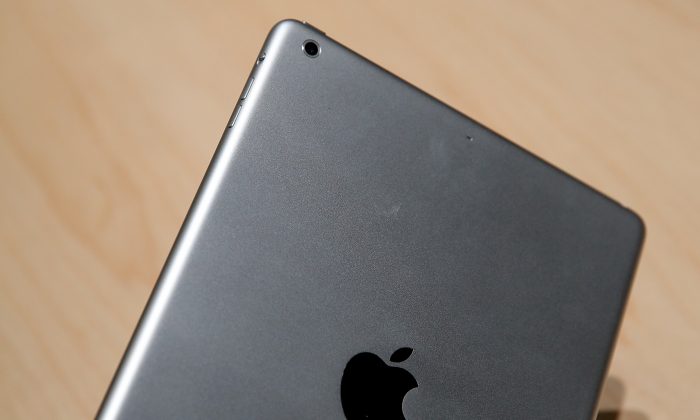 Could Apple be showing off the new iPads on Tuesday?

Apple is holding an unveiling event on September 9, and the new 4.7-inch and 5.5-inch iPhone 6s and the iWatch are expected to be revealed.

Traditionally, Apple doesn’t use its iPhone event to demonstrate its new iPads, which it leaves for an October event, but KGI Securities analyst and reliable Apple product tipster  Ming-Chi Kuo believes that the Cupertino company will be releasing some information about the new iPad Air 2 after announcing the iPhone and the iWatch.

The new Retina iPad Mini and the 12.9-inch iPad Pro are not expected to be unveiled at the September 9 launch event.

Kuo predicts an October 18 launch for the iPad 2.

AP: Will Apple Finally Reveal its Next Big Thing?

SAN FRANCISCO—Apple is poised to reveal its next big thing in a crucial attempt to prove its technological tastemakers still have the power to mesmerize the masses.

The trend-setting company is expected to rouse the still-slumbering market for wearable computers with a smartwatch or bracelet equipped to monitor health, help manage homes and even buy merchandise.

Apple is a late arrival to this relatively new niche: several other companies already sell smartwatches that are being greeted with widespread indifference.

If any company can transform the landscape, it’s likely to be Apple Inc. after the company shifted the direction of digital technology with the iPod, iPhone and iPad. Other MP3 music players, smartphones and tablet computers were first to market, but the devices didn’t enthrall consumers until Apple imbued them with a sense of elegance, convenience and wizardry.

“It means more to us to get it right than to be first,” Apple CEO Tim Cook explained to analysts earlier this year.

Apple is likely to provide the first peek at its wearable device at a Tuesday event in the same Silicon Valley auditorium where Apple’s late co-founder, Steve Jobs, unveiled the industry-shifting Mac computer 25 years ago.

Rumors have been swirling that U2, one of Jobs’ favorite musical groups, will perform live to promote its new album, as well as Apple’s latest gadgetry, which is likely to include an iPhone with a larger screen.

As usual, Apple hasn’t said what’s on tap, though the company’s top executives have repeatedly promised major breakthroughs without providing any details.

“The location suggests this will be a historic event and the historic aspect will be their movement into a new category,” predicted technology analyst and longtime Apple watcher Tim Bajarin.

After Tuesday’s glimpse, it still may be several months before people get a chance to wear the device. There’s speculation that the smartwatch won’t be available until early next year, although Apple is expected to take orders during the holiday shopping season.

A smartwatch or high-tech bracelet would mark the first time that Apple Inc. has rolled out a new product line since the iPad’s release nearly four-and-half years ago. In that time, the Cupertino, California, company, has been sprucing up its selection of iPhones, iPads and Macs with new models each year since Jobs died in October 2011 after a long battle with cancer.

The innovation void raised questions as to whether Apple’s creativity was fading under Cook, Jobs’ hand-picked successor.

Those concerns have waned in recent months amid high hopes for the products Apple has lined up for the holiday shopping season. The fervor propelled Apple’s stock to new highs last week, a dramatic swing in sentiment from 17 months ago when the shares were trading about 44 percent below current levels. The stock was down less than 1 percent to $98.20 in Monday afternoon’s trading.

Even with all the anticipation surrounding the potential smartwatch, the next generation of the iPhone will still be the star of Tuesday’s show, as well as the main source of Apple’s profits for at least the next year.

The device, likely to be called the iPhone 6, is expected to feature a screen spanning at least 4.7 inches diagonally, up from the 4-inch display on the previous models released during the past two years. Some analysts have speculated Apple may also offer an iPhone model with a 5.5-inch screen.

Any significant increase in the iPhone’s size would make the device more competitive with smartphones made by Samsung Electronics and other rivals, and virtually ensure that Apple would have one of the holiday season’s hottest selling items. “There is incredible pent-up demand for a larger-screen iPhone,” Bajarin said.

Besides a larger screen, the new iPhone is expected to include a near-field communications chip that would enable the device to transmit payment information wirelessly to receivers at store check-in stands. The technology is expected to be accompanied with a mobile wallet feature that taps into the more than 800 million credit card account numbers that users store on Apple’s remote servers to buy songs, video and apps from its iTunes stores. The mobile wallet could be secured with a fingerprint reader that Apple introduced last year on the iPhone 5S.

The mobile wallet conceivably could also work on a smartwatch or high-tech bracelet.

Apple’s latest mobile software for the iPhone 6 and other recent models, iOS 8, also includes two features called HealthKit and HomeKit that represent the next step in the company’s to play an even bigger role in the lives of the people tethered to its devices. The tools are designed to turn Apple’s products into a suite of digital servants that do everything from monitoring a person’s eating habits and exercise routines to turning on the coffee maker in the morning to turning off the lights at night.

If Apple follows its recent traditions, the free iOS 8 software will be released shortly before the iPhone 6 goes on sale later this month.