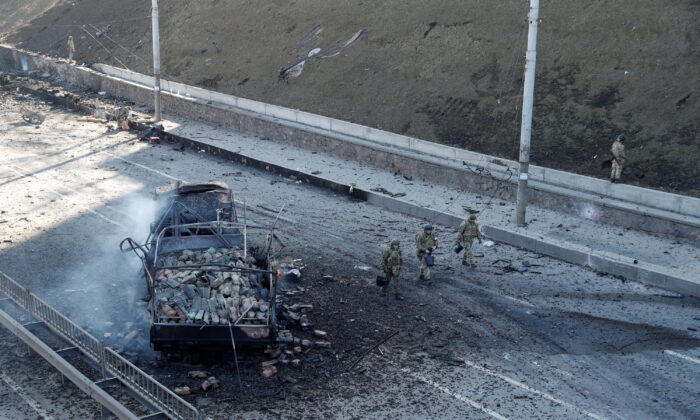 Ukrainian servicemen walk by a damaged vehicle, at the site of fighting with Russian troops, after Russia launched a massive military operation against Ukraine, in Kyiv, Ukraine, on Feb. 26, 2022. (Valentyn Ogirenko/Reuters)
Tech

LONDON—Internet connectivity in Ukraine has been affected by the Russian invasion, particularly in the southern and eastern parts of the country where fighting has been heaviest, internet monitors said on Saturday.

Connectivity to GigaTrans, Ukraine’s main internet provider, dropped to below 20 percent of normal levels before returning to higher levels in the early hours of Friday morning, according to internet monitoring organization NetBlocks.

“We currently observe national connectivity at 87 percent of ordinary levels, a figure that reflects service disruptions as well as population flight and the shuttering of homes and businesses since the morning of the 24th,” Alp Toker, director of NetBlocks, told Reuters.

“While there is no nation-scale blackout, little is being heard from the worst affected regions, and for others there’s an ever-present fear that connectivity could worsen at any moment, cutting off friends and family,” Toker said.

The Monash IP Observatory in Australia said that so far only the Obolonskyi district of Kyiv and central parts of Kharkiv, in Ukraine’s east, showed clear signs of internet failure.

Other anomalies might simply be due to some people moving away from their computers, for example by leaving cities, said Simon Angus, an associate professor of economics who serves as the observatory’s director.

Emails sent to the Belarusian embassy in London were not returned.

By James Pearson and Raphael Satter