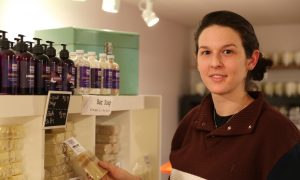 When the San Francisco Rotary Club held its Tuesday meeting this week, the attendance was more than double, and a number of dignitaries were there.

That’s because the Rotary Club was holding one of its two big annual events, the World Wide Rotary Day luncheon. Local San Francisco consulates come to celebrate international service and goodwill. The other big Rotary event is the Public Service Recognition Awards.

The luncheon was a well-planned meeting with consulate representatives from 16 countries, by our last count. Flags of the represented countries were displayed on the tables, adding a United Nations-like flavor to the gathering.

Of the over 33,000 Rotary Clubs worldwide, our own San Francisco Club is the second Rotary Club established, formed in 1908 to support the community after the devastating 1906 earthquake. The first was Chicago, established in 1905. Oakland is the proud third, giving California the edge for early clubs.

It is indeed an impressive organization, with 1.2 million members in over 160 countries, and has an equally impressive repertoire of international service activities.

After being received by media contact Laine Hendricks, we were introduced to the club president, Cecile Chiquette, and later chatted with Ellie Giorgis, VP of International Service.

According to Giorgis, there are three organizations directly affiliated with and supported by the San Francisco Rotary Club: Rotavision, which is an association of eye doctors for children; and Rotaplast and Alliance for Smiles, two organizations that focus on lip and palate repair surgery for kids.

Giorgis has traveled to countries such as Ecuador and Armenia to train doctors and have them develop the skills needed for surgery. She also explained how local international clubs invite and sponsor other clubs to visit and train.

Eight of the 16 consulates attending the World Wide Rotary Day event represented European countries, which demonstrates the strength of Rotary Clubs in Europe. They were Germany, Italy, Spain, Russia, Denmark, Norway, Portugal, and the Slovak Republic. Representatives for Chile, Australia, India, Indonesia, Philippines, Tanzania, Yemen, and Mongolia also attended. Each representative was introduced by the speaker prior to the scheduled activities.

One can learn more about Rotary Clubs online. Visit the San Francisco Club at sfrotary.org.