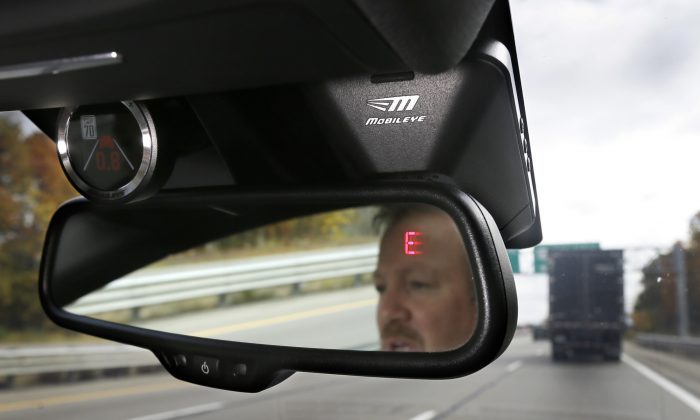 A Mobileye camera system that can be installed in your car to monitor speed limits and warn drivers of potential collisions, mounted behind the rearview mirror during a demonstration of the system, in Ann Arbor, Mich. on Oct. 14, 2015. (AP Photo/Carlos Osorio, File)
Tech

Intel Drops $15B on Mobileye in Race for a Driverless Future

DETROIT—Intel will buy Israel’s Mobileye in a deal valued at about $15 billion, instantly propelling the computer chip and technology giant to the forefront of autonomous vehicle technology.

The deal announced Monday combines Mobileye’s market-leading software that processes information from cameras and other sensors with Intel’s hardware, data centers and its own software, giving automakers a one-stop place to shop for fully autonomous systems.

The combination, expected to close by year’s end, will allow the companies to bring components to market faster at a lower cost, solidifying Mobileye’s leadership position, officials from the companies said.

Automakers and some technology companies are testing autonomous vehicles in California, Michigan and a few other states. Nearly all use Mobileye’s software, which reads inputs from cameras, radar, and laser sensors and makes decisions on what an autonomous car should do.

Jerusalem-based Mobileye says it has contracts with 27 different automakers. It also controls about 70 percent of the market for software that runs automatic emergency braking and semi-autonomous cruise control systems that are in cars and trucks on the road today.

Intel’s involvement and the big price tag show that autonomous cars are coming in large numbers, signifying a sea change in the way we all get around, said Timothy Carone, a Notre Dame University professor who has written about the future of automation. “Major players are finding ways finding ways to position themselves for a change as seminal as the personal computer revolution,” he said.

Autonomous cars will need higher levels of connectivity to the Internet and access to bigger data centers, which Intel can provide, Krzanich said. The two companies also will combine highly detailed mapping efforts. Automakers, Krzanich said, want lower costs, faster times to market and the ability to get an autonomous driving system in one place.

“If you put all of that together, you really get an end-do-end solution for autonomous driving,” said Mobileye Chairman and co-founder Amnon Shashua, who will continue to lead the combined autonomous car unit.

In the deal, Intel Corp. will pay $63.54 for each share of Mobileye N.V., a 34 percent premium to its Friday closing price. The boards of both companies still have to approve the transaction. The companies put the equity value of the deal at $15.3 billion.

The deal is the latest combination as automakers and technology firms race to build autonomous cars and for leadership in auto electronics. It moves Intel-Mobileye to at least parity with Google’s Waymo, Uber Technologies and car companies for autonomous car leadership, Carone said. The deal also is likely to pressure competitors into signing more deals, he added.

Mobileye, with 660 employees, has been forming partnerships worldwide as its growth continued as a separate company. BMW, Intel and Mobileye partnered last year, and Mobileye teamed up with Delphi Automotive to develop building blocks for a fully autonomous car.

Google has a partnership with Fiat Chrysler to work on autonomous minivans, and Volkswagen is working with Uber competitor Gett. Ford has invested $150 million in laser sensor maker Velodyne, and it recently announced a $1 billion purchase of budding robotics startup Argo AI.

California to Give the Green Light to Truly Driverless Cars

Israeli Prime Minister Benjamin Netanyahu praised the Intel acquisition of Mobileye, which he said was the largest deal in the country’s history. He said he’s been assured that the company’s operations will stay in Israel. “The purchase dramatically proves that the vision we are leading is coming true. Israel is turning into a global technology center,” he said.

The combined global autonomous driving company, which includes Mobileye and Intel’s autonomous driving group, will be based in Israel, supporting both companies’ existing production programs and building on relationships with automakers, Tier-1 parts suppliers and semiconductor partners, the companies said.