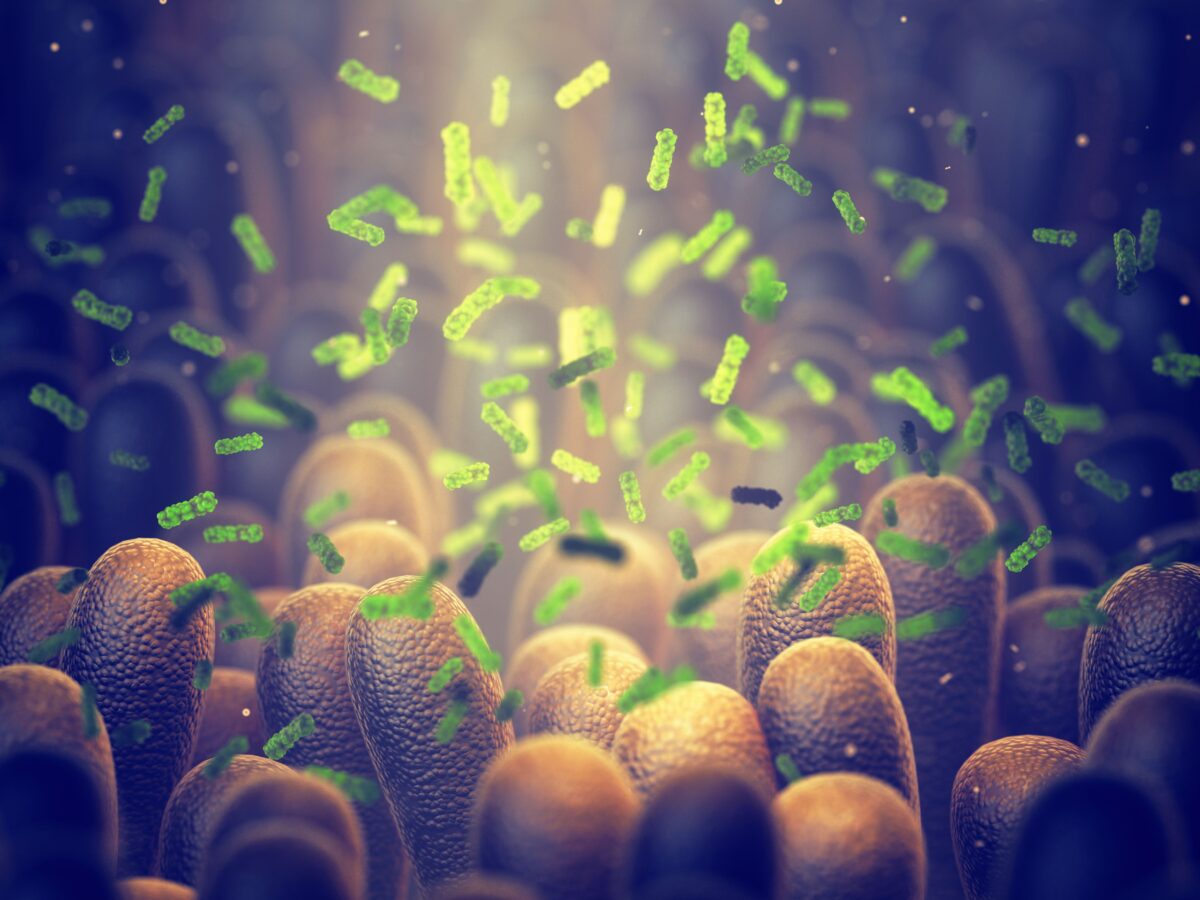 A 3D illustraion of what a healthy intenstinal lining looks like at a microscopic level. (Rost9/Shutterstock)
Health

Over the past several decades, doctors and researchers have accumulated evidence that our gut microbiome has far-reaching effects on our mood, immune system, and many other aspects of our well-being.

Most recently, researchers have found that reducing the growth of “bad” bacteria may reduce the plaque buildup in arteries that leads to heart attacks and strokes.

Researchers at Scripps Research in La Jolla, California, have identified specific peptides (large molecules made up of a chain of amino acids) that can remodel the bacterial population in the intestines of mice. This remodeling consequently reduced cholesterol levels and dramatically slowed the growth of plaque deposits and the thickening of the artery wall also known as atherosclerosis. The findings were reported in Nature Biotechnology.

These peptides reduced the growth of less-desirable species of gut bacteria. These species of “bad” microbes are linked to habitual consumption of the high-fat standard American diet. In mice that developed high cholesterol and atherosclerosis from this high-fat diet, the peptides beneficially shifted the balance of species in the gut microbiome to a more favorable balance. This shift reduced cholesterol levels and reduced the buildup of fatty deposits in arteries.

High cholesterol and arterial plaque are defining characteristics of atherosclerosis which leads to heart attacks and strokes, the leading causes of death among humans.

The gut microbiome plays a very important role in health by helping control digestion and immune system tolerance as well as many other aspects of health. It includes thousands of symbiotic microbial species that find food and shelter in the gut and in return assist their human and animal hosts in a variety of ways including improved digestion, enhanced detoxification, and nutrient generation.

Gut microbiome dysbiosis is a condition in which the state of the microbes in the gut are out of balance and not favorable to continued health. Gut dysbiosis can promote the onset and progression of chronic diseases, such as cardiovascular disease, obesity, diabetes, and central nervous system disorders. When antibiotic medications are used indiscriminately or a standard American diet (SAD) rich in refined carbohydrates like refined grains and sugar, trans and hydrogenated fats, and processed foods are consumed, the gut microbiome can be altered in ways that promote disease.

Diet likely plays the most important role in the composition of the gut microbiome through its direct effect on which microbes get the foods they need to grow. It now appears that the increased risks of obesity, diabetes, hypertension, and atherosclerosis that have been associated with the SAD diet are at least in part due to changes in the microbiome.

That realization led researchers to seek methods to remodel the microbiome, with the goal of reversing these pathological changes and restoring good health. The researchers at Scripps wanted a method to reduce the growth of bad gut bacteria without reductions in good gut bacteria.

The researchers started by using mice that were genetically susceptible to high cholesterol. They then fed the animals a SAD diet that consistently produced high blood cholesterol and atherosclerosis, as well as gut microbiome dysbiosis. The animals’ gut contents were then sampled and a different cyclic peptide was applied to each sample. After waiting a day, the bacterial DNA in the samples were sequenced in order to determine which peptides had shifted the gut microbiome into the desired direction.

Two peptides were found that had significantly slowed the growth of undesirable gut bacteria, shifting the overall gut microbiome balance closer to what was seen in mice that were fed a healthier diet. In the treated mice, blood levels of cholesterol and atherosclerotic plaque were significantly reduced when compared to untreated mice. In the treated mice, researchers noted 36 percent reductions in blood cholesterol levels and 40 percent reductions in the area of atherosclerotic plaques in the arteries.

The cyclic peptides molecules used in the study interacted with the outer membranes of certain bacterial cells in ways that slowed or stopped their growth. The research team has been working with these peptides for years and didn’t report any toxicity or adverse events to the cells of mammals.

The cyclic peptides transit through the gut without absorbing into the body or entering the bloodstream. The success of this study has led researchers to now test their cyclic peptides in mice that model diabetes and other common conditions associated with an unhealthy gut microbiome.

Prior to this finding, the treatment of most cases of gut dysbiosis typically entailed an initial broad reduction in all of the microbes in the gut with either pharmaceuticals, herbals, or an elemental diet. Both good and bad microbes would be removed or reduced in the initial phase of treatment, followed by a methodical repopulation of the beneficial microbes.

While this method has been used for decades with solid clinical benefits in patients, the potential use of cyclical peptides to target only the “bad guys,” while leaving the “good guys” intact would be an eagerly awaited improvement to an already well-established treatment in functional medicine.