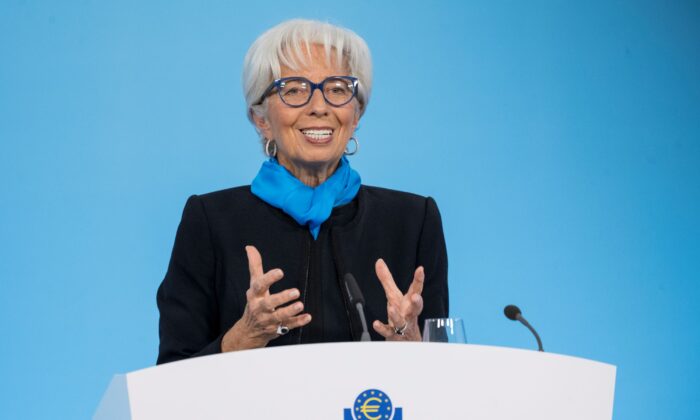 Christine Lagarde, head of the European Central Bank (ECB), speaks to the media following a meeting of the ECB Governing Council in Frankfurt, Germany on Oct. 28, 2021. (Thomas Lohnes/Getty Images)
Economy

She acknowledged the decline would take longer than ECB had initially expected but said favourable financing conditions created by its ultra-easy policy were still essential for the euro zone economy to recover from the COVID-19 pandemic.

“We see inflation rising further in the near term but then declining next year,” Lagarde told a news conference after the ECB left policy on hold.

She identified the main drivers of inflation as energy prices, snarled supply chains as consumer demand recovers, and base effects, especially from last year’s German value-added tax cut, the impact of which should drop out of data in January.

Euro zone inflation hit 3.4 percent last month and is seen rising to 3.7 percent in October in flash estimates due to be released on Friday.

This has raised questions about whether the ECB’s aggressive policy of massive bond purchases and negative rates on deposits was still appropriate.

“We did a lot of soul-searching to actually test our analysis, and we are confident that this analysis of the temporality of these categories is correct and will lead to a decline over the course of 2022.

“Granted, it will take a little longer than we expected.”

The ECB said in September it saw inflation at 2.2 percent this year, 1.7 percent next year, and 1.6 percent in 2023 but it is likely to nudge up its forecasts at the next round in December.

Economists polled by Reuters have also raised their forecasts and now see euro zone price growth at 2.3 percent this year, 1.8 percent in 2022, and 1.6 percent in 2023.

Market gauges of euro zone inflation expectations have also risen and put it around 2 percent, the ECB’s goal, for the next decade.

The five-year, five-year forward inflation swap broke above 2 percent for the first time since 2014 last week, while the one-year, one-year forward was just below that level.