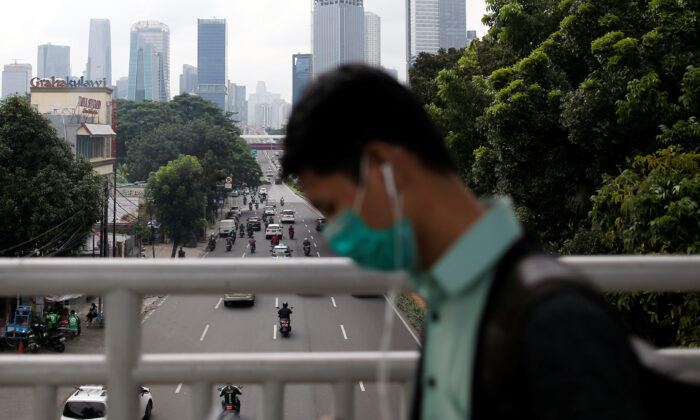 A man wearing protective mask uses his phone as he walks on a pedestrian bridge, following the outbreak of the new coronavirus in China, in Jakarta, Indonesia, on Feb. 13, 2020. (Willy Kurniawan/Reuters)
Asia & Pacific

JAKARTA—Indonesia is retracing the movements of a Chinese tourist diagnosed with coronavirus upon return from the resort island of Bali, a health ministry official said on Feb. 13.

The world’s fourth most populous country, with more than 260 million people, is a popular destination for Chinese visitors but has so far not recorded any cases.

Anung Sugihantono, at Indonesia’s health ministry, told Reuters authorities were checking hotels and other destinations where the tourist might have gone, but nobody in Bali had yet been found with symptoms of the coronavirus.

Another ministry official, Achmad Yurianto, told reporters the tourist was probably infected on public transport in China upon return.

In a statement on microblogging site Weibo, official media in China’s Anhui Province said the tourist, identified only as Jin, traveled from Wuhan City—where the outbreak originated—to Bali on Jan. 22 and returned to China on Jan. 28.

Bali is Indonesia’s main tourism gateway and has already seen 20,000 cancellations, according to Indonesia’s hotels and restaurants association.

The Anhui media said the tourist flew on a plane operated by Indonesia’s Lion Air from Wuhan and returned via Garuda Indonesia flight to Shanghai.

Lion Air spokesman Danang Mandala Prihantoro said in a statement the airline had concluded that passengers and crew on board the plane taken by the tourist were free of the virus.

Garuda Indonesia spokesman Ikhsan Rosan said in a statement the carrier had grounded and disinfected its plane.

Indonesia has barred visitors who have been in China for 14 days and halted flights.