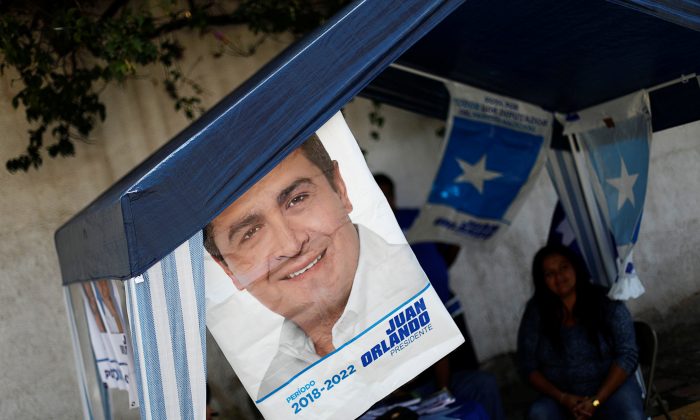 TEGUCIGALPA—Hondurans head to the ballot box on Sunday for a presidential election and many expect the current U.S.-friendly leader to win a divisive second term, eight years after he supported a coup to remove a previous president who flirted with re-election.

Juan Orlando Hernandez, of the center-right National Party, has brought down a sky-high murder rate, raised economic growth and cut the deficit since he took office in 2014, proving himself to be a stable U.S. ally.

But critics warn that Hernandez is tightening his grip on power, using a pliant Supreme Court and electoral tribunal to clear a path for his re-election bid in what is one of the poorest, most violent countries in the Americas.

Polls suggest Hernandez, a savvy political operator who has benefited from a splintered opposition, will easily clinch a second term following a 2015 Supreme Court decision that overturned a constitutional ban on re-election. Voters will also elect 128 lawmakers.

Few in Tegucigalpa, the capital, seemed overly concerned that Hernandez, who in 2009 supported the ouster of former President Manuel Zelaya after he mooted a referendum on re-election, was consolidating power.

“Better the devil you know, than the devil you don’t,” said Ada Solorzano, a 57-year-old nurse. “During his time in office, he’s fought the gangs and the drug traffickers, and he’s improved the employment situation. We know he will continue the war on crime and that he plans to create more work.”

Hernandez has promised to continue his militarized assault on the gangs, which have made Honduras one of the world’s deadliest nations.

Hernandez says he will build roads and bridges with public and private money to lure foreign investment, create 600,000 jobs and help lift growth to above 6 percent.

Television host Salvador Nasralla, who helms a broad left-right coalition called the Opposition Alliance Against the Dictatorship, has trailed Hernandez. Nasralla’s bloc includes the Liberty and Refoundation Party (LIBRE), which is controlled by Zelaya, who many see as a force behind the coalition.

Hernandez had a 15-point lead over Nasralla in the last poll allowed under election rules, in September, with 37 percent of voters expected to back him, versus 22 percent for Nasralla.

Pundits give the unrelated Luis Zelaya, of the Liberal Party, little hope of winning. Instead, his candidacy has helped fragment Hernandez’s opposition

Central America has long struggled with leaders from the right and left who have sidestepped or ignored constitutional constraints on power.

Should Hernandez win, U.S. officials say they want him to quickly revitalize a stalled bill to cap presidential terms.

“A would-be strongman?” Earl Anthony Wayne, a former U.S. ambassador to Mexico, wrote on Twitter in reference to Hernandez.

Arguing that Hernandez’s presidential bid is illegal, the opposition has refused to discuss term limit legislation. The Alliance and Liberal Party have both said they will not accept the results from an election tribunal they accuse of being co-opted by Hernandez until they conduct their own vote count.

Honduras has traditionally had close ties with the United States, which viewed the country as an ideological and military partner during the leftist guerrilla insurgencies that roiled the region throughout the Cold War era.

Hernandez has won favor with Washington, working closely on U.S.-bound migration with White House chief-of-staff John Kelly when he was head of U.S. Southern Command and the Department of Homeland Security, leading a purge of the police force and making it easier to extradite drug bosses.

But Hernandez makes for an awkward partner, having faced accusations that drug and graft-stained money has entered his campaigns and criticism he has stifled dissent.

Wilfredo Arteaga, a waiter in Tegucigalpa, said he thought not that much had improved under Hernandez.

“I’m definitely going to vote for the Alliance, because there’s still a lot of violence, lots of unemployment and we need a real change,” he said.

Share this article with your friends to keep them up to date. Thank you!