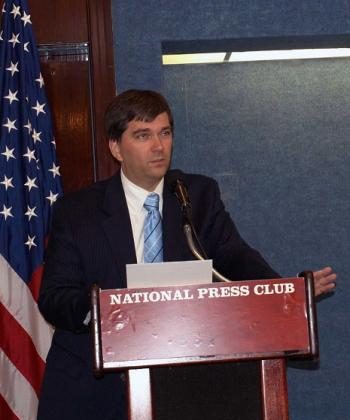 A DOCTOR SPEAKS OUT: Torsten Trey, MD, Ph.D., Chief Executive Director of 'Doctors Against Forced Organ Harvesting,' says China's communist regime took a turn for the worse in 2001, at the same time it was awarded the 2008 Olympics. He spoke July 23 (Yi Ping/The Epoch Times)
International

WASHINGTON, D.C.—With the Olympics to begin only a few weeks away, the opponents of the Chinese communist regime are having to accept the unpleasant fact that China’s leaders have no intention of abiding by China’s promise, when awarded the prize in 2001, to improve its human rights record and respect the Olympic Charter.

Emerging now is the incongruity of the Olympic tradition of peace and tolerance with a host that is bent on suppressing human rights and the press at home while supporting some of the most murderous regimes abroad–Sudan, Burma, and Zimbabwe.

“This year’s Olympics faces constant criticism because the host government is one of the most systematic violators of human dignity,” said David Kilgour, former member of the Canadian parliament and Canadian Secretary of State for the Asia Pacific, speaking at the National Press Club on July 23. Mr. Kilgour was joined by a panel of critics of the regime, speaking on some aspect of this incongruity.

Kilgour is the co-author with attorney David Matas of Bloody Harvest, which investigated allegations of systematic, large numbers of organ harvesting throughout China, inflicted on living, unwilling Falun Gong practitioners. He noted that the Chinese Medical Association recently reached an agreement with the World Medical Association that “organ tourists” can no longer obtain transplants in China.

“Whether this is anything more than public relations, intended to benefit the Beijing Olympics, remains to be seen,” said Kilgour.

Kilgour spoke of the numerous interviews which he and Matas conducted of Falun Gong practitioners sent to forced labor camps. He said they were told of working 16 hours daily, with no pay and little food and many sleeping in the same room. The products made for multinational companies, such as garments, chopsticks and Christmas ornaments, “constituted both corporate irresponsibility and violations of World Trade Organization (WTO) rules.”

Organ Harvesting and Winning the Bid to Hold the 2008 Olympics

The picture became still more grim when Dr. Torsten Trey spoke following Kilgour. Chinese hospitals advertised on the Internet that they can offer scheduled transplantations within 2-4 weeks. In the West, the waiting time is typically several years. Moreover, Dr. Trey notes that the Internet offers are surprising in that Asian countries are reluctant to donate organs, unlike western cultures, and that no pubic organ donation program exists in China. Dr. Trey, of German nationality, is Chief Executive Director of Doctors Against Forced Organ Harvesting.

The explanation for the organ donors given by the regime, i.e., most organ transplantations come from executed prisoners, is simply not plausible, said Dr. Trey: ”In order to provide matching organs in such a short period of time, one would need to refer to a standing pool of donors. However, death row candidates are executed relatively soon after their death sentence,” and so a ready pool of organs is not possible from executed prisoners. There appear to be an abundance of organs, while at the same time no plausible explanation where the organs come from.

Moreover, not every prisoner undergoes blood testing, but the adherents of the banned spiritual movement Falun Gong are frequently blood tested, based on eyewitness accounts and practitioners who managed to get free. Given the way practitioners are treated, often  tortured to death, “the blood testing is certainly not because the perpetrators are concerned about the health of their victims,” said Dr. Trey.

Thus, the evidence and other evidence point to one conclusion: “Falun Gong practitioners are being used as a standing pool of organ donors,” said Dr. Trey.

When did this horrendous practice begin? asked Dr. Trey. “According to the available data, the practice of forcibly harvesting organs from living people started in the same year when China won the bid for the Olympic Games—2001!”

Thus, at the same moment that China promised to improve the human rights situation in order to win the bid, the Chinese Communist leaders launched a program exemplifying the lowest of human depravity.

The Olympics and Controlling the Press

Perhaps the most sinister aspect of the regime is its success in controlling the minds of most Chinese. Naturally, the press cannot be free. In 2001, when Beijing was lobbying for the 2008 Olympics, however, the regime promised more openness and access for the foreign press.

Established in 2003, SOH started shortwave broadcasting that, beginning in 2007, reached the entire of China for 14 hours daily. It reports on the suffering of Chinese minorities, corruption of government officials, persecution of religions and campaigns against freedom of the press.

The reason that SOH became necessary is that in China, media are either state-owned or tightly controlled by the regime. “The Chinese communist regime’s propaganda has been an important mechanism to maintain control. Their techniques have been refined to include a mixture of true and false reports,” said Dr. Wu.

While there may be the appearance of more choice in magazines, newspapers, and TV stations, certain subjects are taboo, said Sarah Cook, from Freedom House. Tibet independence, Falun Gong, Taiwan, Uighurs, multi-party political systems (threatening to Communist one-party rule), and criticism of top leaders are topics not covered by the Chinese press.

Initially, coverage of the schools collapsing from the Sichuan earthquake was not stopped, but after three weeks this all changed, said Ms. Cook. The Chinese journalists feel strong incentives “to write stories that are safe.” If their stories are not used by their editors, they go unpaid.

And the penalties for irritating the authorities are quite severe.

“We are not talking about 6 months sentences, but more like 8 years,” said Ms. Cook. Nonetheless, a few Chinese journalists are bravely “pushing the limits.”

“It has reached the point where the propaganda can completely control public opinion and demonize any individual or group it wants to,” said Wu.

The propaganda that the students fired on the soldiers at the Tiananmen Square Massacre of June 4, 1989 is still pervasive, said Ms. Cook. Of course, the students were unarmed, but people still believe this lie.

“Any Internet company wishing to do business in China must censor itself to gain access to the market,” said Dr. Wu. Even Chinese media outside of China, under political and financial pressure, censor themselves and avoid reporting on certain sensitive areas, such as human rights issues, corruption, even the severity of natural disasters and epidemics.

SOH is seeking to break the communist regime’s blockade of free information through large-scale shortwave radio broadcasting directly to the Mainland Chinese population.

Hope lies with the Chinese people and the brave Chinese journalists. Millions petition the central government, despite the fact that nearly all are turned away, and among the many that are arrested, 50 percent are beaten up, said Ms. Cook.

It is a myth the Communist Party is spreading that the Chinese people are not interested in human rights, and that it is something that has been imposed from the outside, said Ms. Cook. The Chinese journalists and petitioners are seeking fairness and justice despite the adversity, and this proves that human rights matters to the Chinese people, said Cook.