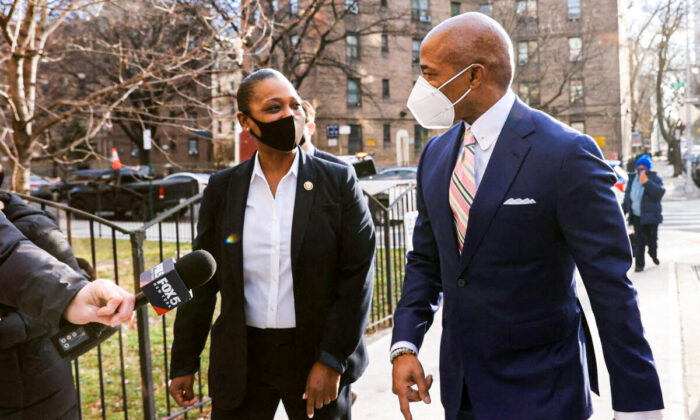 Incoming New York City Mayor Eric Adams and Nassau County Chief of Detectives Keechant Sewell arrive for a ceremony in which she will be announced as the first ever female NYPD Commissioner, in Queensbridge Houses, Queens, N.Y., on Dec. 15, 2021. (Andrew Kelly/Reuters)
US News

New York Mayor-elect Eric Adams will appoint a woman to serve as commissioner of the city’s police department for the first time in its 176-year history, local media reported on Tuesday.

“Keechant Sewell is a proven crime fighter with the experience and emotional intelligence to deliver both the safety New Yorkers need and the justice they deserve,” Adams said in a statement published by the newspaper.

The New York Times reported that Sewell is a 23-year veteran of the police department in Nassau County, New York, where she is chief of detectives. She would be New York City’s third Black police commissioner.

The current commissioner, Dermot Shea, was appointed in 2019 by Mayor Bill de Blasio.

“We welcome Chief Sewell to the second-toughest policing job in America,” Patrick Lynch, president of the city’s major police union, said in a written statement. “The toughest, of course, is being an NYPD cop on the street.”

By Dan Whitcomb and Peter Cooney