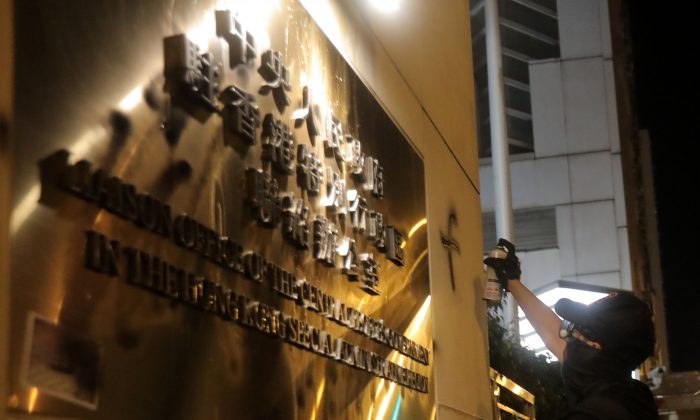 A protester sprays graffiti next to a sign for the Beijing liaison office after a march against a controversial extradition bill in Hong Kong on July 21, 2019. (VIVEK PRAKASH/AFP/Getty Images)
Hong Kong

HONG KONG—Thousands of protesters descended on China’s representative office in Hong Kong on Sunday, as anger over an extradition bill morphs into a fresh front against what many see as a broader erosion of freedoms by the city’s political masters in Beijing.

Millions have rallied over the past two months in an unprecedented show of force against Hong Kong leader Carrie Lam, triggering the worst social turmoil to rock the former British colony since it returned to Chinese rule 22 years ago.

Black-clad activists, many wearing masks, defied police orders and marched beyond the official end-point of a rally that took place earlier in the day to make their way toward the Liaison Office, in a direct challenge to authorities in Beijing.

When asked whether the protesters would attempt to force entry into the building, one 30-year-old man dressed head to toe in black said “No,” as he mimicked a throat-slitting action.

“That would be the death of Hong Kong,” he added.

Some protesters pelted eggs and paint balls at the Liaison Office, while others spray-painted graffiti in the latest wave of demonstrations to rock the Asian financial center.

Hundreds of riot police took up positions close to the Liaison Office. Nearby, activists daubed graffiti on massive concrete pillars leading up to it, with the words “Restore Hong Kong, Revolution of Time.”

Sunday’s protest, which had proceeded peacefully along the police-mandated route, is the latest in a series of rallies that have plunged the Chinese-ruled city into political crisis.

The bill, which would allow people to be extradited to mainland China for trial, has drawn widespread opposition. Many Hong Kong residents view it is the latest step in a relentless march toward mainland control.

At the march, some held up banners that said, “LIAR” and “No excuse Carrie Lame.” A poster plastered on a lamppost called for an “Investigation on police brutality.”

More demonstrations are planned over the coming weekends, posing the greatest popular challenge to Chinese leader Xi Jinping since he took power in 2012. For the Chinese Communist Party in Beijing, stability is an overwhelming priority.

Recent images of police firing rubber bullets and tear gas near the city’s financial district as well as chaotic scenes of demonstrators storming the legislature were beamed live to the world—except in mainland China, where they were blocked from many social media sites.

Earlier on Sunday, authorities used blue and white water-filled barriers to barricade government and police headquarters, while global bank HSBC, in a rare move, pulled down large metal barriers on the street level of its gleaming skyscraper building.

While most of the rallies have passed off peacefully, some have erupted into violence late at night when more radical protesters have clashed with police.

The city’s police force has come under scrutiny after officers fired rubber bullets and tear gas last month to disperse demonstrators in some of the worst violence to roil Hong Kong in decades.

The police are struggling to cope amid haphazard decision-making, worsening morale, and anger among rank-and-file officers that they are taking the public heat for government unpopularity, serving and retired officers, politicians and security analysts told Reuters.

By Clare Jim and Greg Torode. The Epoch Times contributed to this report.