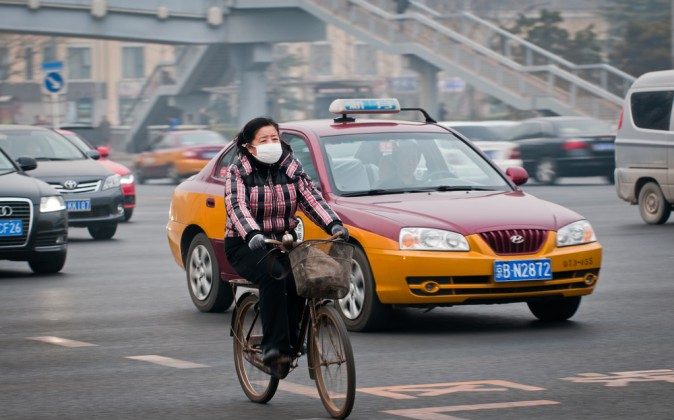 In Beijing, Weather and Pollution Are a Deadly Combo

Traffic and industrial emissions are largely responsible for severe urban haze in China, but weather also can make air pollution much worse.

For a new study published in the Proceedings of the National Academy of Sciences, researchers collected extensive air samples in Beijing, China’s capital and one of the most heavily polluted areas in the world.

The city is teeming with a large amount of fine particulate matter (called PM) in the atmosphere that eventually results in environmental and health problems, but also in conditions that affect weather and climate.

“We find in our study that the conditions in Beijing are prone to PM formation, because of highly abundant condensable gases,” says Renyi Zhang, distinguished professor of atmospheric sciences at Texas A&M University.

“This efficient aerosol formation process is distinct from that occurring in many other urban centers worldwide, although the chemical composition of Beijing’s aerosols is unremarkable.”

Of the 20 most polluted cities in the world, China is home to 16 of them. Beijing often exceeds by many times the acceptable air standards set by the US Environmental Protection Agency.

Sometimes the pollution in Beijing can be so bad that visibility is less than 50 feet (15 meters) and the air quality is 40 times higher than acceptable levels established by the World Health Organization, Zhang says.

A study by the Chinese government in 2010 showed that pollution contributed to 1.2 million premature deaths in that country, and that likely, more than 500 million Chinese will have their lives shortened by at least five years because of poor air quality.

Meteorology is a critical factor in how severe the haze is and how densely it forms, Zhang says. “We found that Beijing’s PM episodes occur on a periodic cycle, which is largely driven by wind variations.”

“When the wind is shifted from the south, that’s when trouble starts because most of the factories and power plants are located in the southern region. Under reactively stagnant conditions, the gaseous pollutants from city traffic and surrounding industry react in the air, locally producing a large amount of PM.”

The haze and pollution problem appears to be more intense in fall, spring, and winter months because it rains more in summer and that tends to clean the air by washing out the particles.

What Should China Do?

“Beijing’s pollution is similar to other urban cities in China,” Zhang says. “Collectively, those urban areas, along with regional industrial facilities, agricultural activities, and biogenic emissions, throughout the country constitute the dominant sources of large-scale pollution in China, covering thousands of square miles and lasting for many days.”

Facing mounting criticism from the world and its own people, the Chinese government has promised to improve air quality, but imposing the strict controls necessary on the many factories and power plants and reducing car emissions is not easy with China’s booming economy of the last 25 years.

“Our study suggests that targeted regulatory controls over the PM precursor emissions from transportation and regional industry are needed to reduce urban pollution in China,” Zhang points out.

“The formation of severe urban and regional haze in China is attributable to the higher rates but lower standards for air pollutant emissions, which are ultimately linked to its rapidly growing economy, fast urbanization, and a large population.

“Improving air quality in that country will likely have profound consequences on China or even the world economy.”

The Ministry of Science and Technology of China, and collaborative research program between Texas A&M University, the National Natural Science Foundation of China and the Robert A. Welch Foundation.

*Image of “woman” via Fotokon / Shutterstock.com