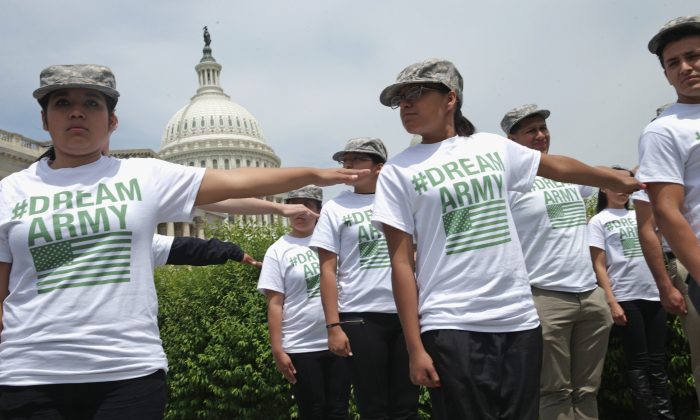 Undocumented youth show their support for the ENLIST Act at a rally in front of the U.S. Capitol on May 20, 2014. (Somodevilla/Getty Images)
Opinion

“Gentlemen, start your engines.” That message, played repeatedly in a commercial beamed on the Jumbotron at this year’s Indianapolis 500, had nothing to do with racecars. A coalition of faith, business, and law enforcement leaders used the iconic event to launch their call for House Republicans to get moving on immigration reform.

“It’s time for effective, commonsense, and accountable solutions that respect and enhance the rule of law,” said Mark Curran, a Lake County, Illinois sheriff in the commercial.

This bill would let immigrants who were brought to the United States illegally as children to enlist in the military. If they serve and are honorably discharged, they would then be eligible for a green card, which would put them on a path to citizenship.

These are young people who didn’t choose to come here. Their parents brought them. An opportunity to serve in the military would give them a chance to demonstrate their loyalty to the United States. In the long run, the ENLIST Act would allow these folks to become full, productive members of society.

Naturally, the ENLIST Act has a broad support base. Republican Jeff Denham of California introduced the measure, which 26 Democrats and 24 Republicans co-sponsored.

Conservative commentator Linda Chavez called the ENLIST Act “the right—and principled—thing to do,” in her syndicated column.

When asked about the ENLIST Act, Cantor suggested that he supported it. “If you’ve got a kid that was brought here by their parents—unbeknownst to the child—and that they’ve grown up in this country and not known any other, and they want to serve in our military, they ought to be allowed to do that and then have the ability to become a citizen after that kind of service,” he told Politico.

But actions speak louder than words. Cantor blocked the ENLIST Act from being included in a military authorization bill, and it doesn’t look likely that it will come up for a vote anytime soon.

Meanwhile, the public continues to support an overhaul of our broken immigration system. Even Fox News pollsters find that most Americans support reform, including majorities of Republican voters. In fact, a May poll conducted by conservative advocacy groups found that tea party Republican voters favor immigration reform. The Tea Party Express and Americans for Prosperity report that over 70 percent of tea party-aligned voters want Congress to pass immigration legislation this year.

It seems like everyone is on board. Why is this issue going nowhere?

For one thing, Cantor isn’t willing to lead on immigration. If he won’t permit a vote on something as narrowly targeted as the ENLIST Act, it’s doubtful that House Republicans will tackle a more comprehensive approach.

That’s a loss for our military, which will lose out on a group of qualified, dedicated recruits. And it’s a loss for the Republican Party, which is destined to win scant numbers of Latino voters in 2016. More importantly, our country as a whole will suffer if our broken immigration system continues to hobble along as is.

Sure, illegal immigration is contentious. Rep. Steve King, an Iowa Republican, has compared offering undocumented veterans citizenship to “handing out candy at a parade.” But one study showed that noncitizen enlistees were “far more likely to complete their enlistment obligations successfully than their U.S.-born counterparts.”

King himself avoided serving in Vietnam in the 1960s through multiple deferments. How ironic that he and his colleagues are now squashing the military service dreams of others.

Of course, not all undocumented immigrants want or are able to serve in the armed forces. They still deserve a chance to get right with the law, pay fines and back taxes, and become citizens.

But young immigrants who are willing to put their lives on the line for our country should be allowed to do so. It’s time to pass the ENLIST Act, then move ahead with immigration reform.

Raul A. Reyes is an attorney and columnist in New York City. This article previously published in OtherWords.org.