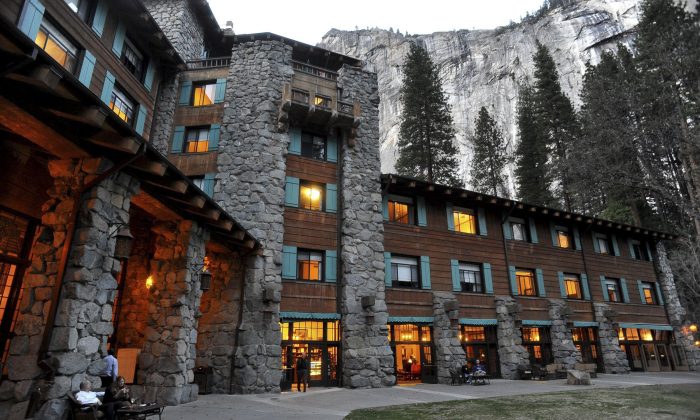 The historic Ahwahnee Hotel is lit up as dusk falls over Yosemite National Park, Calif, on March 24, 2014. A new concessionaire takes over Tuesday at the park and many of the landmark places will have name changes at least temporarily because the old concessionaire lays claim to the names. The famed Ahwahnee Hotel is set to become the Majestic Yosemite Hotel. (John Walker/Fresno Bee via AP, File)
US

SAN FRANCISCO—The prices of Yosemite National Park souvenirs have been slashed in half, and road signs directing visitors to iconic attractions have been switched.

The changes took place at midnight Monday amid a bitter legal dispute between government officials and Delaware North, which operated many of the popular attractions from 1993 until Monday when competitor Aramark took over.

As part of the vendor change, the National Park Service is required to pay Delaware North for the value of many of Yosemite’s trademarked names for sites that the company managed and maintained.

Delaware North sued the Park Service after the two sides couldn’t agree on the trademarks’ value.

Court filings show the Park Service valuing the trademarks at $3.5 million while Delaware North puts their worth at $51 million.

The two sides say they remain far apart in negotiations. So the Park Service said it was compelled to change the names.

Park Service spokesman Scott Gediman said temporary signs were used in the hope that a settlement will be reached.

Gediman, however, said agreeing to the offer would acknowledge that Delaware North owns the names.

Mark Bartholomew, a State University of New York Buffalo Law School professor who teaches trademark law, says Delaware North might want to preserve the value of the names that will lose value if no longer used.

“I think all sides will ultimately come to an agreement after some more posturing,” Bartholomew said.

Meanwhile, an historic sign welcoming visitors to the Ahwahnee Hotel was stolen over the weekend, Gediman said.

“It’s part of the park’s historic fabric,” Gediman said. “And we are taking this seriously.”