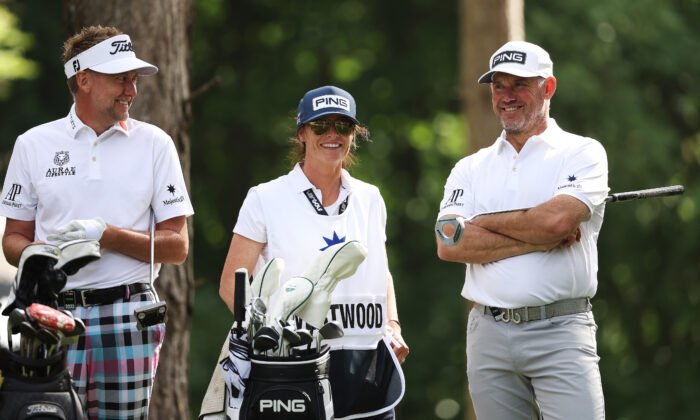 Lee Westwood of England pictured with his wife Helena and Ian Poulter of England during the LIV Invitational at The Centurion Club, in St Albans, England, on June 10, 2022. (Matthew Lewis/Getty Images)
Golf

Ian Poulter, Justin Harding from South Africa, and Adrian Otaegui from Spain won a stay on Monday from a British court allowing them to play in the Scottish Open—following suspension by the DP World Tour for participating in the LIV Golf Series without a release from the European tour.

The three will now be included in the field this week’s Scottish Open at The Renaissance Club, the first DP tour event co-sanctioned by the PGA Tour.

The temporary stay applies only to the three players.

“My commitment to the European Tour has been there since day one,” said Poulter. “And it’s still there today. I’m proud of playing so often, when it was to the detriment of world ranking points and FedEx Cup points I could have earned playing more in America.”

Sergio Garcia and Lee Westwood were among 16 LIV Golf players who wrote to the DP World Tour requesting the rescission of suspensions of three tournaments on the DP Tour and fines of 100,000 pounds ($121,230), roughly the amount of the last-place purse prize of LIV events.

During the second LIV event at Pumpkin Ridge in Oregon, Westwood questioned why the DP Tour feels threatened.

“I’ve been playing Ryder Cup golf since 1997, and the criteria has been to be a member of the European tour,” said Westwood.

“Why would the European tour change their rules so dramatically?” posed Westwood. “Because another tour [PGA] doesn’t like it or feels financially threatened. There’s just a bit too much protection going on for my liking and not enough transparency.”

European tour CEO Keith Pelley provided a statement: “I will simply say we are disappointed by the outcome of today’s hearing, but will abide by the decision. It is important to remember, however, this is only a stay of the sanctions imposed, pending the hearing of the players’ appeal as to whether those sanctions were appropriate.”

Last Friday Pelley issued a statement that included, “Before joining LIV Golf, players knew there would be consequences if they chose money over competition. Many of them at the time understood and accepted that. Indeed, as one player named in the letter said in a media interview earlier this year; ‘If they ban me, they ban me.’ It is not credible that some are now surprised with the actions we have taken.”

The players stated in the letter that the alliance would have a negative impact on DP World Tour players.

“Approximately 40 DP World Tour members who would have been eligible for the Scottish Open on the DP World tour will now not be eligible, and instead will only have the option to go and play on the PGA Tour in Kentucky the week before The Open, for less money but at a higher cost to participate.”

Pelley replied: “The letter claims that these players ‘care deeply’ for the DP World Tour. An analysis of the past participation statistics on our Tour in recent years of several of the leading players named, suggests otherwise. One player in particular named in the note has only played six Rolex Series events in the past five years. Another one, only four. I wish many of them had been as keen to play on our Tour then as they seem to be now, based on the fact they have either resigned their membership of the PGA Tour or, if they are still in membership, have been suspended indefinitely.

“Furthermore, given how deeply these players say they care about the DP World Tour, perhaps some of them could have played in Ireland this week in support of our new title sponsor, in particular one player who gave us a signed commitment to play at Mount Juliet. With that player currently in action at Pumpkin Ridge, you can imagine the allegation in the letter that we are in the wrong, is hard to accept.

“We also take great exception to an allegation made near the end of the letter which states we are somehow playing ‘second fiddle’ to the PGA Tour. Nothing could be further from the truth,” added Pelley.

Reuters and the Associated Press contributed to this article.