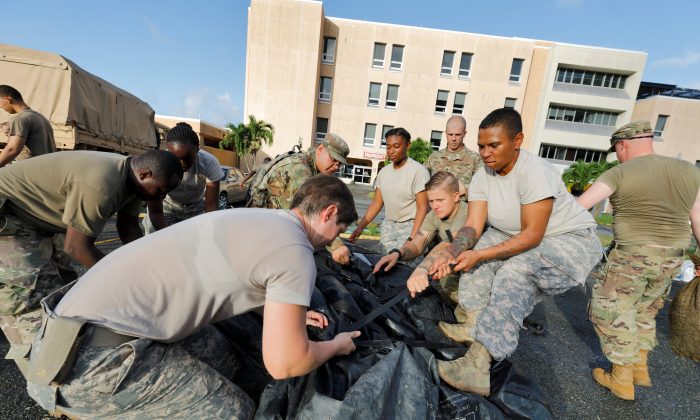 Soldiers from the 602nd Area Support Medical Company secure a portable tent as they break down a field hospital outside the Schneider Regional Medical Center while preparing to evacuate their unit in advance of Hurricane Maria, in Charlotte Amalie, St. Thomas, U.S. Virgin Islands, on Sept. 17, 2017. (REUTERS/Jonathan Drake)
Americas

A second powerful storm in as many weeks was bearing down on a string of battered Caribbean islands, with forecasters saying that Maria had strengthened into a hurricane on Sunday and would intensify before hitting the Leeward Islands on Monday night.

Maria was about 275 miles east-southeast of the Leeward island of Dominica with maximum sustained winds of 75 mph at 5 p.m. ET, the U.S. National Hurricane Center said.

“Maria … could be near major hurricane intensity when it affects portions of the Leeward Islands over the next few days, bringing dangerous wind, storm surge and rainfall hazards,” the forecaster said.

Maximum sustained winds were expected to accelerate to 120 mph within 72 hours, by which time the hurricane could reach the British and U.S. Virgin Islands and Puerto Rico, a U.S. territory with a weakened economy and fragile power grid.

The government of Puerto Rico has already begun preparations for Maria, which is expected to make landfall there on Tuesday, officials said.

The storm is moving west-northwest at about 15 mph and is expected to cross the Leeward Islands on Monday night, the NHC said.

Hurricane warnings were in place for the French island of Guadeloupe, Dominica, St. Kitts, Nevis and Montserrat, while a hurricane watch was in effect for U.S. Virgin Islands, British Virgin Islands, Saba and St. Eustatius, St. Maarten, St. Martin and St. Barthelemy, and Anguilla.

A tropical storm warning was in effect for Antigua and Barbuda, St. Lucia and Martinique.

Maria is approaching the eastern Caribbean less than two weeks after Irma hammered the region before overrunning Florida. That storm, one of the most powerful ever recorded in the Atlantic with winds up to 185 mph, killed at least 84 people, more than half of them in the Caribbean.

The NHS also issued a tropical storm watch for portions of the U.S. mid-Atlantic and New England coast by Tuesday as a second hurricane, Jose, moved slowly north from its current position in the Atlantic Ocean about 335 miles southeast of Cape Hatteras, North Carolina.

The eye of Jose, with top sustained winds of 90 mph, should remain off the U.S. East Coast, the NHS said.

Even so, by Tuesday it could bring tropical storm conditions from Fenwick Island, Delaware, to Sandy Hook, New Jersey, and from East Rockaway Inlet on New York’s Long Island to the Massachusetts island of Nantucket.

Up to five inches of rain could fall over parts of the area, and the storm could bring dangerous surf and rip currents as well.