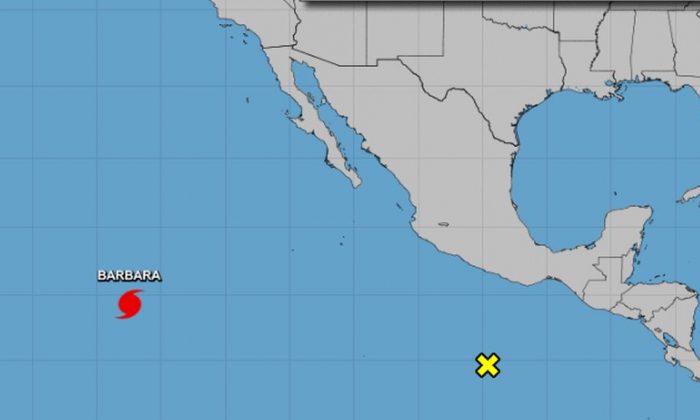 Category 4 Hurricane Barbara began to weaken on July 3 after reaching wind speeds of 140 mph, according to U.S. weather forecasters.

Category 5 strength storms have wind speeds of over 157 mph.

The storm is churning about 1,860 miles east of Hilo, Hawaii, in the middle of the Pacific Ocean and is moving 12 mph to the west-northwest, according to the U.S. National Weather Service.

Not every day you see a Category 4 hurricane and the shadow of a total solar eclipse passing by! #HurricaneBarbara #EclipseSolar2019 pic.twitter.com/fZpK5idc6x

The storm is forecast to move in the direction of Hawaii. However, it is slated to weaken to a tropical depression, the agency said.

“Maximum sustained winds have decreased to near 140 mph (220 km/h) with higher gusts. Barbara remains a category 4 hurricane on the Saffir-Simpson Hurricane Wind Scale. Weakening is forecast, and Barbara is expected to weaken to a tropical storm on Friday,” said the forecaster.

Hurricane #Barbara is rapidly intensifying over the eastern Pacific waters and is now a Category 4 hurricane on the Saffir-Simpson Hurricane Wind Scale. https://t.co/Z1gTkcfqMR pic.twitter.com/i7IHcdMc4Q

Hurricane Barbara became a major hurricane this morning, and now has sustained winds of 140 mph. Barbara remains no threat to land within the next 5 days, and is expected to begin weakening on Thursday. pic.twitter.com/3fL0wSGWKC

There are no hazards affecting land.

The Atlantic hurricane season officially started on June 1 and lasts until November 1, and the National Oceanic and Atmospheric Administration (NOAA) said there will four to eight hurricanes.

The NOAA said it has a 70 percent confidence of its seasonal forecast.