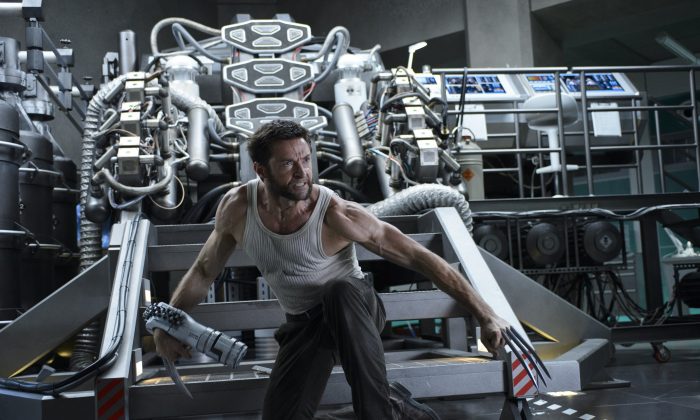 Huge Jackman’s huge. I mean Hugh. Steroids? Probably not. But he’s never been this pumped and shredded.

This reviewer once overheard a young actor in the gym say, “If I ever got a lead role in a movie—I’d do a cycle” (of steroids). This was a curious statement at the time. Now it’s pretty much a thing: bodybuilding-as-acting.

What with Huge Jackman ripping off his shirt and flexing every 20 seconds, Marvel Comics’ latest—the fairly entertaining “The Wolverine”—unquestionably falls into this category.

This is a story of Logan, the manly mutton-chopped mutant—he of the tri-clawed fists and hammer-headed hairdo.

We meet him at the start of the movie doing solo prison time down a dry well in Japan, on the day the Americans drop the atom bomb on Nagasaki. He helps a young Japanese soldier survive the blast.

Scoot to the present. That Japanese soldier, Yashida (Hal Yamanouchi), has become a gazillionaire. He’s dying; he wants to see Logan one last time. He knows about Logan’s adamantium bones (adamantium’s an indestructible fictitious metal) and what they could do for his health.

Logan’s living like a mountain cave-dwelling hermit in Canada—except he’s so rugged and awesome in his hermit-ness that he dwells on an exposed outcropping like some kind of macho magpie, surrounded by collected junk.

Someone kills his only friend and neighbor (a grizzly bear), so Huge Jackman the Wolverine rolls into the local bar and gives that bad bear-killer the old tri-claw slice.

Off we go to Tokyo! There’s a wedding scene crashed by nasty tattooed Yakuza gangsters, a very noteworthy fight atop a 300 mph bullet train, and ninjas who shoot arrows with strings attached. If 50 of them hit you, they can reel you in like a hooked koi fish in a Japanese garden pond.

The ghost of Jean Grey (Famke Janssen), Logan’s ex, keeps showing up in his dreams, trying to convince him to hurry up and die so they can hang out together in the afterlife.

Maybe it’s not such a bad idea. Wolverine is never happy in this dimension. He’s either morose or furious, or both, with some decent one-liners. Same as he ever was.

Immortality’s apparently not fun if you’re a ronin (samurai without a master). Yet whether he deserves the samurai comparison is debatable.

See, he’s got six built-in, retractable swords but he’s a little sloppy and, well—lazy. (Somebody needed to say it.)

He relies on his hyper-healing supernormal ability to get past things like, say, a samurai sword stuck straight through his chest and out his back. It hurts enough to make his eyes bug, but not enough to motivate him to work on his blocking skills.

There are two other women of importance: Mariko (Tao Okamoto), the lovely biological daughter of Yashida (Logan thinks she’s biologically lovely, too), and green-clad, blonde mutant “Viper (Svetlana Khodchenkova). One really, really does not want to be kissed by this woman.

The best scene of the movie is when two no-nonsense Japanese matrons throw the filthy, recently mountain-dwelling Wolverine into a bathtub. He needs cleaning up to meet with royalty. They harshly scrub him with long-handled brushes while he protests loudly, to no avail, finally emerging to say, “I feel violated.”

All the boatloads of CGI that normally infest a Marvel Comics movie hold up well, except for the neighborhood bear. CGI almost never makes animals believably realistic.

There’s a derivative, human-driven giant robot that suggests the director got an early peek at the script for “Pacific Rim.”

“The Wolverine” has got notable computer wizardry, but the storytelling is thin, and the price of too much CGI whiz-bangery is adult boredom.

Furthermore, this is not the kind of film where you talk about acting. Unless, of course, it’s… bodybuilding-as-acting.

Hugh Jackman, however, is a serious triple-threat old-school acting talent. He can sing, dance, and act. Now he’s a quadruple threat.

Quick—who’s the founder of the bodybuilding-as-acting category? Arnold Schwarzenegger. Some of your more notable adherents of this method are Sly Stallone, Dwayne Johnson, and Vin Diesel.

Recite the following using Arnold’s accent: “Hugh is beeg! He has got striations, vascularity, and pectoral shelves!”

Huge Hugh can now join Ah-nuld in the bodybuilder-actor hall of fame.