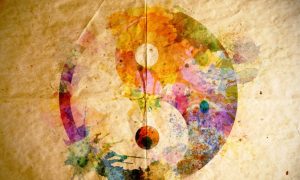 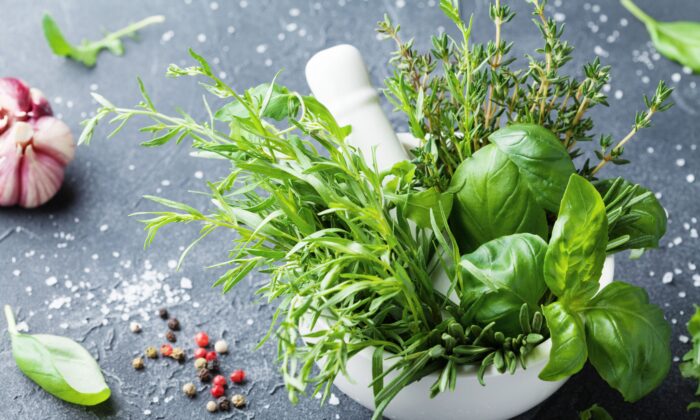 Vegetables and herbs offer a soothing suite of nutrients and antioxidants that can help the body resist disease. (Julia Sudnitskaya/Shutterstock)
Mind & Body

How to Treat Polycystic Ovary Syndrome (PCOS) With Diet

Some herbs are so antioxidant-rich that researchers decided to see if they might be able to reduce the DNA-damaging effects of radiation. Radioactive iodine is sometimes given to people with overactive thyroid glands or thyroid cancer to destroy part of the gland or take care of any remaining tumor cells after surgery. For days after the isotope injection, patients become so radioactive they are advised not to kiss or sleep close to anyone, including their pets. If they breathe on a phone, they’re advised to wipe it “carefully” or cover it “with an easily removed plastic bag.” Other recommendations include “avoid[ing] splatter of radioactive urine,” not going near your kids, and basically just staying away from others as much as possible.

The treatment can be very effective, but all that radiation exposure appears to increase the risk of developing new cancers later on, according to a 2007 study published in the journal Cancer Cytopathology.

In order to prevent the DNA damage associated with this treatment, researchers at Tabriz University of Medical Sciences in Iran tested the ability of oregano to protect chromosomes of human blood cells in vitro from exposure to radioactive iodine. In vitro means the study used cells, or biological molecules outside their normal biological context. Think petri dishes.

At baseline, about 1 in 100 of our blood cells show evidence of chromosomal damage. If radioactive iodine is added, that jumps to about 1 in 8. What happens if, in addition to the radiation, increasing amounts of oregano extract are added? Chromosome damage is reduced by as much as 70 percent, found the researchers. They concluded that oregano extract significantly protects against DNA damage induced by the radioactive iodine in white blood cells.

This was all done outside the body, though, which the researchers justified by saying it wouldn’t be particularly ethical to irradiate people for experimental research. True, but millions of people have been irradiated for treatment, and researchers could have studied them or, at the very least, they could have just had people eat the oregano and then irradiate their blood in vitro so the blood samples had an accurate amount of oregano compounds that actually make it into the bloodstream from eating.

Other in vitro studies on oregano are similarly unsatisfying. In a comparison of the effects of various spice extracts, including bay leaves, fennel, lavender, oregano, paprika, parsley, rosemary, and thyme, oregano beat out all but bay leaves in its ability to suppress cervical cancer cell growth in vitro while leaving normal cells alone. But people tend to use oregano orally—that is, they typically eat it—so the relevance of these results are not clear.

Similarly, marjoram, an herb closely related to oregano, can suppress the growth of individual breast cancer cells in a petri dish, according to a 2013 study published in PLOS One. That same cancer suppression was seen in human breast cancer tumors grown in chicken eggs (which is something I’ve never seen before).

Are there any clinical trials on oregano-family herbs on actual people? The only such clinical, randomized, control study I could find was a study on how marjoram tea affects the hormonal profile of women with polycystic ovary syndrome (PCOS). The most common cause of female fertility problems, PCOS affects up to 1 in 8 young women and is characterized by excessive male hormones, resulting in excess body or facial hair, menstrual irregularities, and cysts in one’s ovaries that show up on ultrasounds.

Evidently, traditional medicine practitioners reported marjoram tea was beneficial for PCOS, but it had never previously been put to the test. Drinking two daily cups of marjoram tea versus a placebo tea for one month did seem to beneficially affect the subjects’ hormonal profiles, according to a 2015 study by researchers at the University of Jordan. This seems to offer credence to the claims of traditional medicine practitioners. However, the study didn’t last long enough to confirm that actual symptoms improved as well, which is really what we care about.

Is there anything that’s been shown to help? Well, reducing one’s intake of dietary glycotoxins may help prevent and treat the disease, according to researchers at the University of Athens. That finding was echoed in a 2015 review published in Advances in Nutrition. Glycotoxins are created when we smoke or cook food at high temperatures. Animal fats are particularly prone to becoming glycotoxins, also known as advanced glycation end products (AGEs), when they are cooked. And it turns out, these glycation end products are linked to well-known contributors to disease.

That 2015 review noted the connection: “Over the past two decades there has been increasing evidence supporting an important contribution from food-derived advanced glycation end products (AGEs) … [to] increased oxidative stress and inflammation, processes that play a major role in the causation of chronic diseases.”

In other words, the researchers linked these glycotoxins to oxidative stress and inflammation, which are major contributors to disease, including polycystic ovary syndrome (PCOS), according to researchers in Greece.

Women with PCOS tend to have nearly twice the circulating AGE levels in their bloodstream. PCOS may be the most common hormonal abnormality among young women in the United States and is a common cause of infertility, menstrual dysfunction, and excess facial and body hair.

The prevalence of obesity is also higher in women with PCOS. Since the highest AGE levels are found in broiled, grilled, fried, and roasted foods of “mostly animal origin,” it is possible that this causal chain starts with a bad diet. For instance, eating lots of fried chicken leads to obesity, which in turn contributes to PCOS.

But it is diet, rather than obesity, that appears more strongly linked to PCOS. That’s because researchers found the same association between high AGE levels and PCOS in lean women as well, according to a 2008 study published in The Journal of Clinical Endocrinology & Metabolism.

“The role of AGEs as inflammatory and oxidant mediators, may be linked with the metabolic and reproductive abnormalities of the syndrome,” the study noted.

In other words, even though obesity raises baseline inflammation, which contributes to many diseases, it is the AGEs present in food that appear to be the greater cause of PCOS.

Further, the buildup of AGE inside polycystic ovaries themselves suggests the potential role AGEs have to contribute to the actual disease process, beyond just some of its consequences.

RAGE—the Receptor in the body for Advanced Glycation End products—is highly expressed in ovarian tissues. This may make ovaries particularly sensitive to the effect of AGEs and thereby contribute to the cause of PCOS and infertility.

Does this mean we have to cut down on AGE-rich foods, such as meat, cheese, and eggs? Or can we just come up with drugs that block AGE absorption? We know AGEs have been implicated in the development of many chronic diseases. Specifically, food-derived AGEs play an important role because diet is a major source of these pro-inflammatory AGEs.

We know cutting down on these dietary glycotoxins reduces the inflammatory response, but people often prefer fried chicken to stewed chicken. So why not just take an AGE-absorption blocking drug every time you eat KFC to reduce the absorption of these toxins? What’s more, AST-120, a drug typically given to patients with chronic kidney disease, actually lowers AGE blood levels. This oral absorbent drug is just a preparation of activated charcoal, like what’s used for drug overdoses and when people are poisoned. It does come with side effects, including constipation, appetite loss, nausea, and vomiting.

But taking a drug to combat toxic substances in our food doesn’t seem entirely rational. Especially since some foods contribute to a wide range of diseases, while others contain phytonutrients that heal and nourish us.

The other way to reduce absorption of AGEs, largely through diet, is the long-term and fundamental solution. It’s simple, safe, and feasible. And since the foods that are high in AGEs are linked to many other disease profiles, there are clearly problems with eating high volumes of certain foods.

Diet isn’t the only or even the worst source of AGEs for some people. For some, the first step is to stop smoking. The glycotoxins in cigarette smoke are also believed to contribute to increased heart disease and cancer in smokers. After smoking, the main thing is to decrease your intake of high-AGE foods, and increase your intake of foods that may help pull AGEs out of your system, like mushrooms. And eat foods high in antioxidants, like berries, herbs, and spices.

We can easily eat less AGEs by simply changing the method of cooking from a high dry heat to a low heat with high humidity. In other words, boil instead of broil, stew instead of sear, and steam rather than fry.

What we eat, however, may still be more important than how we cook it. The amounts of AGEs vary widely in different foods. For instance, boiled chicken contains less than half the glycotoxins of roasted chicken, but even deep-fried potatoes have less than boiled meat. We can also eat foods raw, which doesn’t work as well as for blood pudding, but raw nuts and nut butter may contain about 30 times less glycotoxins than roasted, and we can avoid high-AGE processed foods, like refined carbs mixed with sugars and salts.

Why does it matter? Because study after study has shown that switching to a low-AGE diet can lower inflammation within our bodies. Inflammation is an immune response gone awry and it contributes to virtually every disease. Even just a single meal high in AGEs can profoundly impair our arterial function within just two hours of consumption, according to a randomized controlled trial conducted in 2007 by researchers in Germany.

Do we have evidence that reducing AGE intake actually helps with PCOS? Yes. Within just two months, researchers at the University of Athens found differences from subjects’ baseline diets switched to a high-AGE diet and then to a low-AGE diet, with parallel changes in insulin sensitivity, oxidative stress, and hormonal status. The take-home message? Those with PCOS may want to try a low-AGE diet, which, according to the above study, meant restricting meat to once a week and eating it only boiled, poached, stewed, or steamed, as well as cutting out fast-food-type fare and soda.

What if instead of eating steamed chicken, we ate no meat at all? Rather than measuring blood levels, which vary with each meal, we can measure the level of glycotoxins stuck in our body tissues over time with a high-tech device that measures the amount of light our skin gives off because AGEs are fluorescent. And, not surprisingly, this turns out to be a strong predictor of overall mortality, note researchers in a 2015 study published in the British Journal of Nutrition.

The “one factor that was consistently associated with reduced [skin fluorescence]: a vegetarian diet.” This “suggests that a vegetarian diet may reduce exposure to preformed dietary AGE … potentially reduc[ing] tissue AGE.”

Michael Greger, M.D., FACLM, is a physician, New York Times bestselling author, and internationally recognized professional speaker on a number of important public health issues. He has lectured at the Conference on World Affairs, the National Institutes of Health, and the International Bird Flu Summit, testified before Congress, appeared on “The Dr. Oz Show” and “The Colbert Report,” and was invited as an expert witness in defense of Oprah Winfrey at the infamous “meat defamation” trial. This article was originally published on NutritionFacts.org