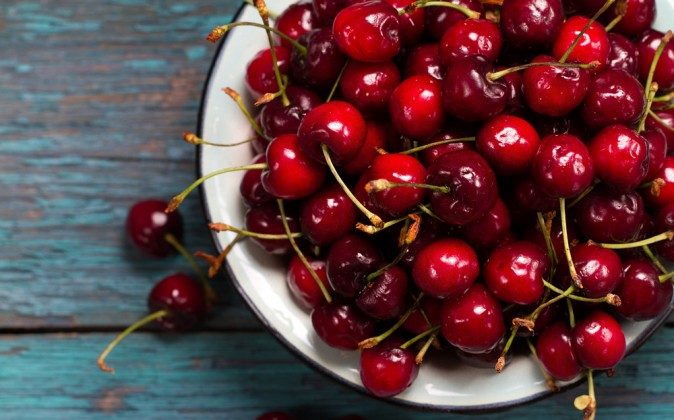 Down south, we did not have cherries. With winters that were not cold enough and summers that were just too hot, I was stuck with brilliant blueberries, blackberries the size of eggs, and figs plump with ruby-flecked innards. All right, I really have no room to complain, but the fact remains that I did not have fresh cherries every summer until I moved to the Hudson Valley.

Cherries have been cultivated in the Middle East for well more than 2,000 years, with their name being an English misinterpretation of the French word cherise, which had replaced the first name, ciris, of Anglo Saxon origin. Call them what you like, but cherries pack a nutritional punch in their little, stemmed bodies. Ten cherries have a meager 34 calories, no fat, and 1 gram of fiber. And who eats just 10? I usually down a bowl thinking, “I love antioxidants, nummy nummy, num…” Eat 30 cherries and you’ve knocked out three grams of fiber, the equivalent of a slice of whole wheat bread—but you get a bonus in way more antioxidants and a dose of vitamin A. Vitamin A is essential for vision health, and antioxidants like those in the heavily pigmented cherry play a role in brain health.

Blossoming in the spring—with the season running June to September, depending on the area in which they are grown—cherries might be the best and healthiest way to stain your lips a rosy pink. Cherries are one of those fleeting beauties of the plant world, only staying in their prime one to two days after picking. They’re also difficult to grow, but it’s definitely a battle worth fighting if you can get your hands on local, fresh ones, or have the ability to go to a pick-your-own farm. This is one reason many cherries we eat today are canned, frozen, put into pie fillings, or concocted into a “red flavor” that in no way tastes like a real cherry. And real cherries, with stems and shiny coats, are what you want.

Like apples, there are several varieties of cherries, each with their own flavors and textures. The most common variety you’ll find is Bing cherries, a sweet variety that is firm and juicy. Red- and yellow-flecked cherries called Rainiers, which appear to be blushing in bins, are also delicious if you can find them. Nibbling on one reveals a clear flesh-making this a white cherry—with a delicate sweetness that, in my opinion, trumps Bings. Sour cherries, which are mainly used for preserves and other forms of cooking, are also worth a taste. Bright and tiny, they may not be great for eating out of hand, but they make a lovely sauce for dark meats, such as duck. Pork also takes well to cherry sauces, a natural pairing for grilled pork tenderloin in summer. Sweet-sour cherries, stay true to their namesake and are just that: a combination of the sweet cherry and the sour cherry, like a Duke or Royale cherry.

Read more about the health benefits of cherries

How do you pick the best of the bunch? You can’t judge a book by its cover, but you can generally judge a cherry by its stem. Make sure the stems are firm and plump, with the fruit pleasantly firm and free of blemishes. Sweetness can be judged by the color, with darker-fleshed cherries being sweeter. Cherries make a great snack, washed and placed in a bowl for munching. If you have a bumper crop of cherries, pit and freeze them for later use. You can also cook cherries down with a little bit of sugar or honey for a quick sauce for angel food cake or to stir into oatmeal.

*Images of “cherries” and “cherry pie” via Shutterstock