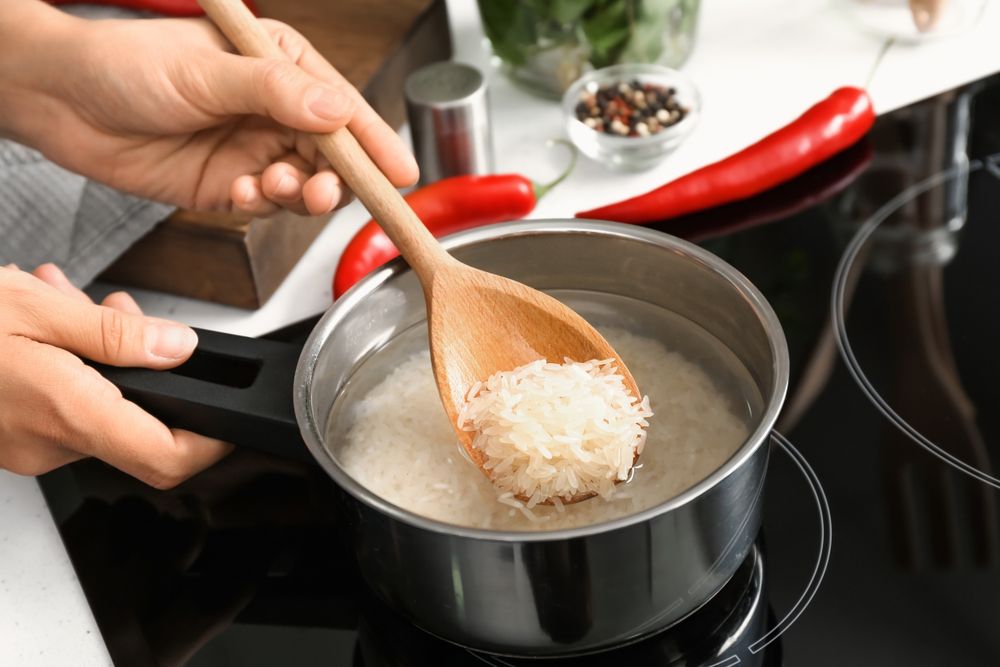 Depending on how you cook rice, the trace arsenic levels can be reduced up to 60%. (ShutterStock)
Toxins

How to Cook Rice to Lower Arsenic Levels

Boiling rice like pasta reduces arsenic levels, but how much nutrition is lost?

Cooking rice in a high water-to-rice ratio reduces toxic arsenic content, which I discuss in my video How to Cook Rice to Lower Arsenic Levels. What exactly does that mean? Well, as you can see at 0:16 in my video, if you boil rice like pasta and then drain off the water at the end, you can drop arsenic levels in half—50 to 60 percent of the arsenic gets poured down the drain—whereas the typical way we make rice, boiling off the water in a rice cooker or pot, for example, doesn’t help. In fact, it may even make things worse if the water you’re using to cook the rice has arsenic in it, too, which is a problem that exists for about three million Americans, as about 8 percent of public water supplies exceed the current legal arsenic limits.

“Cooking rice in excess water”—and then discarding the excess water—“efficiently reduces the amount of inorganic As [that is, toxic arsenic] in the cooked rice,” but how much nutrition are you pouring down the drain when you do pour off the excess water?

“Unpolished brown rice naturally contains vitamins and minerals that are lost when the bran layer and germ are removed to make white rice. To compensate, since the 1940s polished white and parboiled rice sold in the United States is often enriched”—that is, white rice has had vitamins and minerals sprayed on it to so it’s “enriched” and “fortified.” That’s why cooking instructions for enriched white rice specifically say you shouldn’t rinse it and you should cook it in a minimal amount of water. In other words, you should do the opposite of what you’d do to get rid of some of the arsenic. But brown rice has the nutrients inside, not just sprayed on.

“Rinsing [white] rice,” by putting it in a colander under running water, for example, “removes much of the enriched vitamins sprayed onto the rice grain surface during manufacture,” removing most of the B-vitamins. But, “rinsing had almost no effect on vitamins in whole grain brown rice”—because brown rice has got the nutrition inside. It’s the same with iron: Rinsing white rice reduces iron levels by about three-fourths, but the iron in brown rice is actually in it, so rinsing only reduces the iron concentration in brown rice by about 10 percent. Rinsing didn’t seem to affect the arsenic levels, so why bother?

Well, if you really wash the rice, for example, agitating the uncooked rice in water, rinsing, and repeating for three minutes, you may be able to remove about 10 percent of the arsenic. So, one research team recommends washing rice as well as boiling it in excess water, but I don’t know if the 10 percent is worth the extra time it takes to wash the rice. However, as we discussed, boiling rice like pasta and then draining off the excess water does really cut way down on the arsenic, and, while that cooking method also takes a whack at the nutrition in white rice, the nutrient loss in brown rice is “significantly less,” as it is not so much enriched as it is rich in nutrition in the first place.

“Cooking brown rice in large amounts of excess water reduces the toxic arsenic by almost 60% and only reduces the iron content by 5%. It reduces the vitamin content of brown rice by about half,” however. You can see a graph of what I’m talking about at 3:18 in my video. A quick rinse of brown rice before you cook it doesn’t lower arsenic levels, but boiling it and draining off the excess water, instead of cooking to dry, drops arsenic levels by 40 percent. That was using about a ratio of 6 parts water to 1 part rice. What if you use even more water, boiling at 10-to-1 water-to-rice ratio? You get a 60 percent drop in arsenic levels.

With white rice, you can rinse off a little arsenic, but after cooking, you end up with similar final drops in arsenic content, but the iron gets wiped out in white rice by rinsing and cooking, whereas the iron in brown rice stays strong. There are similar decrements in the B vitamins with cooking for brown and unrinsed white rice, but once you rinse white rice, the B vitamins are mostly gone before they even make it into the pot.

What about percolating rice? Well, we know that regular rice cooking doesn’t help reduce arsenic levels, but boiling then draining rice like pasta does, while steaming doesn’t do much. What about percolating rice as a radical rethink to optimize arsenic removal? Researchers tried two types of percolating technology: One was a mad scientist-type lab set-up, and the other was just a regular off-the-shelf coffee percolator. Instead of putting in coffee, they put rice and percolated 20 minutes for white and 30 for brown. The result? As you can see at 4:39 in my video, they got about a 60 percent drop in arsenic levels using a 12-to-1 water-to-rice ratio. Raw brown rice started out at about double the arsenic levels of raw white rice, but, after cooking with enough excess water and draining, they end up much closer. Though, a 60 percent drop in arsenic levels by percolating at a 12-to-1 ratio was about what we got boiling at just 10-to-1. So, I don’t see a reason to buy a percolator.