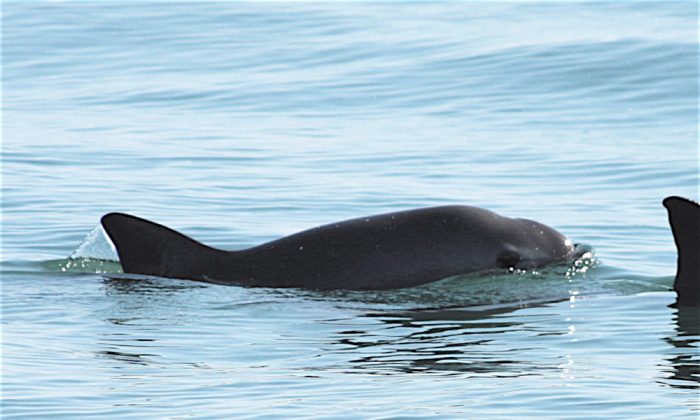 How the Navy Trained Dolphins to Help Save an Endangered Porpoise

For more than half a century, dolphins have been helping the U.S. Navy to find mines or enemies under water. Now, for the first time, they will aid in an attempt to save a fellow marine mammal—the world’s most endangered porpoise.

It won’t be easy, and it may have never happened if not for a conversation between two of the foremost marine mammal experts—Frances Gulland and Sam Ridgway. Gulland is the senior scientist at The Marine Mammal Center in Sausalito, California. Ridgway is president of the National Marine Mammal Foundation.

Gulland is also a member of the International Committee for the Recovery of the Vaquita.

The world’s smallest porpoise, the vaquita, lives only in the uppermost tip of Mexico’s Gulf of California. Its population has been decimated by the gill nets of fishermen hunting for totoaba—a fish whose swimming bladder sells for $18,000 to $25,000 in Hong Kong and possibly more in mainland China, where it’s considered a delicacy and a medicine.

The hunger for totoaba bladders has brought the vaquita to the brink of extinction. About 60 were left at the end of 2015.

The Mexican government imposed a ban on gill nets in the region, but the fishing continues illegally.

One possible solution would be to relocate the animals, but rescuers would first need to find the elusive creatures.

Gulland discussed the plight of the vaquita with Ridgway, who is also one of the founders of the Navy Marine Mammal Program.

The program was launched in 1961 to train dolphins to search for amphibious bombers in Vietnam. Later dolphins were also successfully trained to look for underwater mines.

It occurred to Ridgeway that if dolphins can be trained to discern a human body under water, perhaps they could be trained to find a porpoise. He shared the idea with Gulland.

The vaquita committee then pitched the idea to the Mexican government and Mexican Navy and officially asked the U.S. Navy to bring the dolphins to help locate vaquitas.

The dolphins will be deployed in the spring as part of a larger effort to find the porpoises and relocate them to a safe bay elsewhere in the gulf.

How to Train a Dolphin

Thanks to echolocation, a natural sonar, dolphins can locate a person or an object up to few hundred yards away, said Jim Fallin, spokesman for the U.S. Navy’s Marine Mammal Program. And they can be trained similarly to dogs. If the training is made into a game with treats as rewards, some dolphins will participate.

“They have to be interested in doing it, because they can get bored pretty quickly,” Fallin said. “You can’t force them to do anything.” The training can take up to five years.

Bit by bit, the trainers present the dolphins with increasingly difficult tasks. First, they are taught to just swim towards a person in the water nearby. Then the person would swim farther and farther from the dolphin, and the task would be to echolocate  and swim towards him, but not to approach too closely. The dolphins are trained not to get too close so they won’t frighten the vaquita away, or harm it.

Dolphins can discern a person (or a porpoise) from a fish because the latter do not have lungs, Fallin said. Creatures with lungs “sound” different to dolphins.

Fallin is confident the dolphins, four females with plenty of Navy experience, will be able to find vaquitas. They have recently been successfully tested on another porpoise species. But it’s a difficult task nonetheless, as the dolphins will need to get within a few hundred yards of the hard-to-find vaquita, whose territory spans up to 1,600 square miles.

Teetering on the Edge

Even if they are found and captured, the fate of the vaquita is far from certain. There’s concern that the few remaining females could die during capture, dooming the species. Breeding in captivity has successfully saved species such as the red wolf and the California condor, but the vaquita has only been scientifically described since the 1950s and has never been bred or even held in captivity.

Some experts, like Omar Vidal, Mexico director of the World Wildlife Fund, oppose the capture plan, which they say could injure or even kill the few remaining vaquitas and open up a free-for-all of illegal fishing once they are removed from their natural habitat. “We must strive to save this porpoise where it belongs: in a healthy Upper Gulf of California,” he said.

Experts including Lorenzo Rojas-Bracho, chairman of the vaquita committee, Barbara Taylor, leader of the Marine Mammal Genetics Program at the National Oceanic and Atmospheric Administration, and Sarah Mesnick of the NOAA’s Southwest Fisheries Science Center stressed that the capture program “should not divert effort and resources away from extension and enforcement of the gill net ban, which remains the highest-priority conservation actions for the species.”

Veterinarians will evaluate the animals’ reactions and release stressed individuals, they wrote. Should a death occur, the team will re-evaluate the sanctuary strategy.

“It is important to stress that the recovery team goal is to return vaquita from the temporary sanctuary into a gill net-free environment,” they wrote.