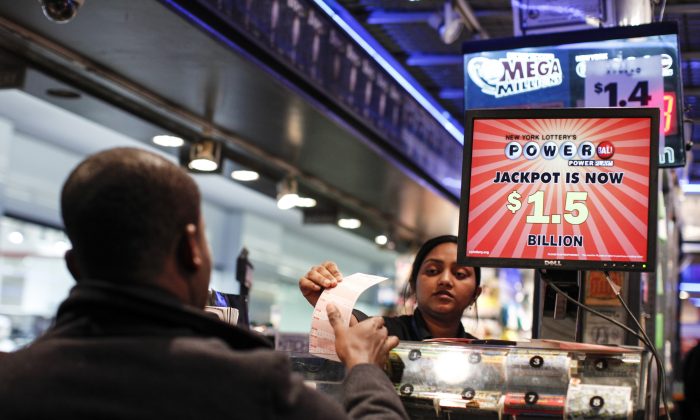 In this file photo a man buys a Powerball lottery ticket at a newsstand in New York City. Some people like state lotteries because they are run by the government; others are suspicious of them for that same reason. (KENA BETANCUR/AFP/Getty Images)
Viewpoints

How the Left and Right View Government

I was asked recently to give a talk on sports betting, which just became legal in a handful of places outside of Nevada, where it has long been legal.

I don’t bet myself, but I’m not morally opposed to the idea. I study gambling practices and related laws, so I know more about gambling than a lot of people.

In my talk, I compared sports betting to state lotteries. While I am fairly neutral about private or casino-style gambling, including sports betting, I don’t like state-run lotteries. Details about my reasons for that opinion are for another day, but suffice it to say, I don’t see them as a safe or “light” form of gambling.

My negative comments about state lotteries drew a borderline hostile reaction from one member of the audience. Actually, it was a friend named Don, who is now retired and regularly plays the lottery. His objection to my analysis was so strong that he felt obliged to apologize to me after the talk was over.

I wasn’t offended. Most people like or at least accept lotteries; I’ve lost that debate. Lotteries are conducted in 45 states, plus the District of Columbia, Puerto Rico, and the U.S. Virgin Islands. They are, after all, low stake bets, and states promote them as being a way to raise money for education or some other good purpose. Those who buy lottery tickets are told (at least by some states) that they are performing a civic good. Don is one of those people, and I’d challenged his belief.

Trying to explain my concern about state lotteries to him, I said it was because, unlike casinos, they were run by the government. He immediately replied that having the government run them was why he liked them. That brief exchange contained a significant insight into the difference in thinking between a conservative and a liberal.

The liberal (Don) prefers to have his government conduct the lottery because he believes that it assures fairness and a proper allocation of the profits. He would be far more suspicious of a privately conducted lottery, where the profit motive might encourage operators to run an unfair game.

Moreover, profits from a private lottery might be disguised and never reach favored governmental programs. Government operators wouldn’t have the same inclination to cheat or divert profits from their intended destination because they are public servants not motivated by profit.

The conservative (me) didn’t object to the act of betting but didn’t want the state to run what was once called a “numbers racket.” To the conservative, having the state hire officials and charge them with maximizing profits by encouraging citizens to buy tickets, even if it means telling the citizens that this form of gambling is a safe civic obligation, is highly problematic. It is especially offensive when the state engages in aggressive advertising aimed at lower-income neighborhoods in rural or inner-city areas (which is pretty common for lotteries).

The conservative doesn’t fear cheating by private entities any more than he would fear cheating by governmental officials (and there have been several cases of cheating by states and state officers). After all, the profit motive compels private operators to keep their businesses in operation. That means they have to abide by state regulations. Violations of those rules jeopardize businesses and may lead to criminal sanctions. So, while the temptation to cheat may be there, so is deterrence.

More bothersome to the conservative is what happens when cheating by state operators is suspected? To whom does one report his or her suspicions? To the very people who run the game? What if the complaint is about unfair or misleading advertising? Will the lottery board regulate itself? Numerous instances of misleading advertising by state lotteries go uncorrected, precisely because state lottery officials are carrying out the charge to sell as many tickets as possible, and they supervise themselves.

Perhaps, most importantly, what do parents tell their children about the dangers of gambling when the state is telling them it is a good thing?

So, at one level, the disagreement with Don was about state-run lotteries, but at a more fundamental level, it was about each of our views of the proper role of government.

Conservatives are inclined toward smaller government, at least in part, because they don’t trust the way governments operate. They see the free market as something akin to crowd-sourcing: It reflects the collective judgment of the masses, which they see as superior to the centralized decision-making that comes with big government.

Liberals, on the other hand, tend to have faith in their ability to come up with good policies and implement them through governmental agencies that aren’t driven by the financial considerations of individuals. They see that approach as superior to leaving such matters to the unpredictable variations of a market that operates on incomplete information.

Either starting assumption is defensible, but the more significant risk is taking the decision-making authority out of the hands of the citizenry and putting it with governmental administrators.

I had a discussion with a friend named Peter a few years ago. We were talking about environmental regulation in China (Peter is an official in the Environmental Protection Agency). He asked, “Where do you complain about pollution coming from a factory when the government owns the factory?” He brilliantly answered his own question, referencing China’s one-child limit by saying, “You round up your brothers and sisters to hold a march. Oh wait, you can’t do that. The government killed them.”

Lord Acton famously said that power corrupts. We usually think of that in terms of individuals, but collectives—including governments—can accumulate power and become corrupt. They can also be problematic without being fully corrupt. That is because they are inclined toward growth and are hard to rein in.

Governments are necessary, but their expansion and intrusion into the marketplace concern me more than it comforts me. That seems to be the sign of a conservative.