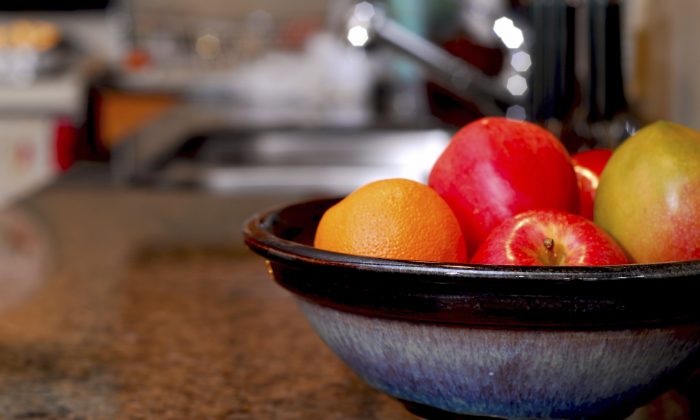 How the Kitchen Counter Can Predict Your Weight

The types of ready-to-eat foods on a kitchen countertop could also hint at the weight of the people in the home, particularly women.

The study looked at photographs of more than 200 kitchens in Syracuse, New York, to test how the food environment relates to the body mass index (BMI) of the adults at home.

The women in the study who kept fresh fruit out in the open tended to be a normal weight compared with their peers. But when snacks like cereals and sodas were readily accessible, those people were heavier than their neighbors—by an average of more than 20 pounds.

“It’s your basic See-Food Diet—you eat what you see,” said Brian Wansink, professor and director of the Cornell Food and Brand Lab and lead author of the paper in the journal Health Education and Behavior.

The study finds that women who kept soft drinks on their counters weighed 24 to 26 pounds more than those who kept their kitchen clear of them. A box of cereal on the counter lined up with women there weighing an average 20 pounds more than their neighbors who didn’t.

“As a cereal-lover, that shocked me,” said Wansink. “Cereal has a health-halo, but if you eat a handful every time you walk by, it’s not going to make you skinny.”

When unhealthy foods are the most visible options in the kitchen, falling into habits that lead to weight gain becomes easier. Keeping those foods out of sight by sequestering them in pantries and cupboards reduces their convenience, making it less likely that they will be grabbed in a moment of hunger.

Women who had a fruit bowl visible weighed about 13 pounds less than neighbors who didn’t.

Clearing the counters of the cereals, sodas, and other snack items and replacing them with healthier visible cues like fresh fruit could help, the study finds: Women who had a fruit bowl visible weighed about 13 pounds less than neighbors who didn’t.

6 Things You May Not Know About Weight Loss

The study also finds that normal-weight women were more likely to have a designated cupboard for snack items and less likely to buy food in large-sized packages than those who are obese.

The findings provide new insights into the role environmental factors play with obesity and offer remedies to rid the home of unhealthy cues while promoting the healthy ones. Rather than just the usual dietary advice prescribing less food and more exercise, the study suggests that consciously replacing unhealthy cues with healthy ones in the home could have a real impact on a person’s BMI, especially for women.

“We’ve got a saying in our lab, ‘If you want to be skinny, do what skinny people do,'” Wansink said.

This article was orignally published by Cornell University. Republished via Futurity.org under Creative Commons License 4.0.