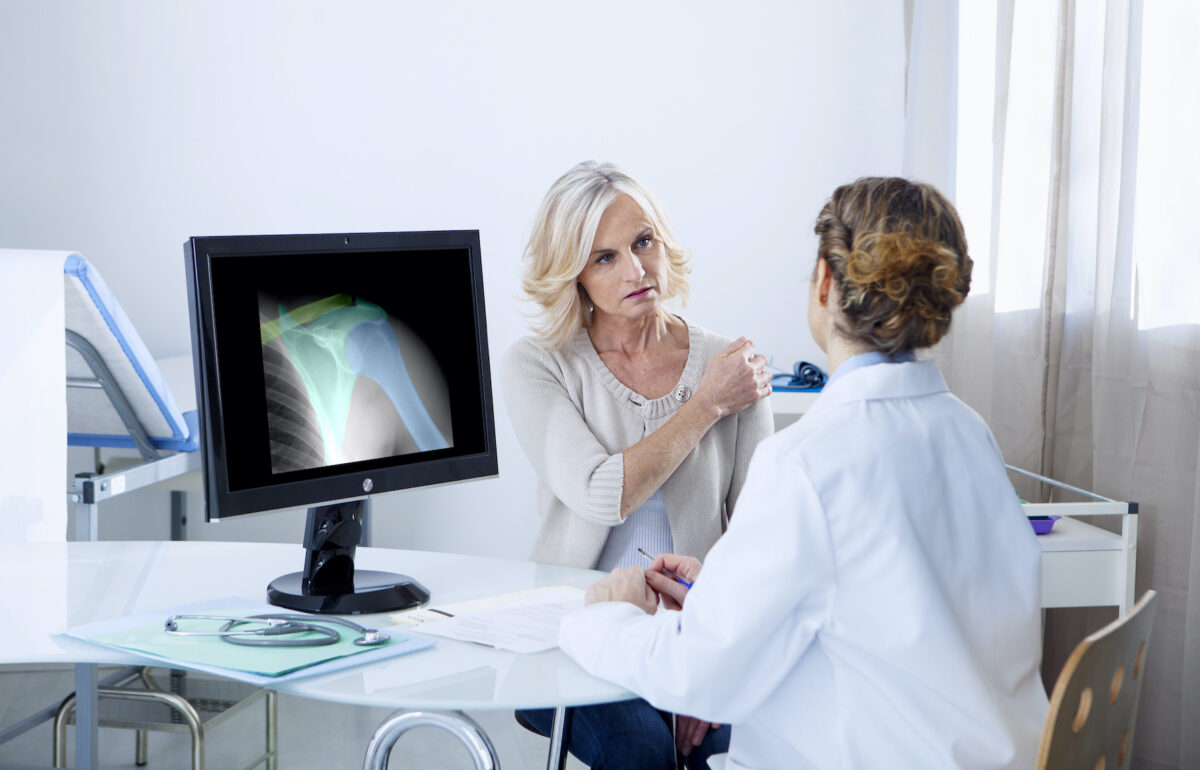 Drugs prescribed to strengthen bones can have the opposite effect and lead to devastating consequences, research finds. (Image Point Fr/Shutterstock)
Medicine

How Safe Are Anti-Osteoporosis Bone Drugs?

In the case of some osteoporosis drugs, it seems to be a case of marketing over medicine
BY Martha Rosenberg TIMEApril 9, 2022 PRINT

Anti-osteoporosis bone drugs such as Fosamax, Boniva, and Prolia have become a billion-dollar market for drugmakers thanks to aggressive marketing.

To sell its “bisphosphonate” bone drug Fosamax, Merck began marketing the dangers of osteoporosis in hopes of reaching a market”far beyond ailing old ladies” according to Fortune magazine. It hired an operative to create the “Bone Measurement Institute” to establish the “risk of osteoporosis,” as a health epidemic and plant bone scan machines in medical offices across the country—a gambit that made Merck $280 million from Fosamax’s first-year sales. Merck’s “Bone Measurement Institute” then lobbied, with Merck-funded groups, to get Medicare to cover bone scans through the Bone Mass Measurement Act.

Moreover, the now widely accepted condition of “osteopenia—the risk of getting osteoporosis—was flatly invented out of thin air according to a professor of medicine who was present when the term was concocted. It was meant to indicate someone just below the threshold for an osteoporosis diagnosis, and even that bone density was somewhat arbitrary according to the experts who helped draft it.

Osteoporosis is said to afflict 1 in 3 women over 50 but some medical sources disagree. The British Medical Journal (BMJ) observes that osteoporosis advocacy groups are funded by drugmakers, which leads to broadened diagnostic criteria.

An article in the British Journal of Nursing notes that “the marketing of osteoporosis has created the impression that all women (and many men) are at risk of suffering fragile bones, hip fracture and death. Large sums of money have been spent on raising awareness, diagnosing, and treating osteoporosis.” And PLOS research states that osteoporosis “has the potential to be overdiagnosed, since according to its definition, many otherwise healthy people are labelled with a ‘disease.’”

Nonetheless, bone drugs such as bisphosphonates have vaulted in popularity with Fosamax alone netting $3.05 billion in 2007. But even as the drug class boomed, serious safety signals surfaced. By 2009, FDA reports revealed 23 cases of esophageal cancer and Fosamax was “the suspect drug (in 21 patients) or the concomitant drug (in 2 patients), according to a letter published in The New England Journal of Medicine. Bisphosphonate patients also experienced inflamed/ulcerated esophagi, atrial fibrillation, intractable pain, osteonecrosis of the jaw (ONJ), and the very fractures the drugs were supposed to prevent. As early as the 1970s, Merck knew about ONJ effects in rats according to internal emails. As risk emerged, the drugs seemed to be a triumph of marketing over medicine.

When the biotech drugmaker Amgen launched Prolia (denosumab) in 2009, a novel monoclonal antibody biologic to be injected every six months, many hoped it would be safer. But background documents for FDA hearings didn’t bode well. “Three subjects, two of which were healthy subjects under the age of 35, required hospitalization for pneumonia after a single dose of denosumab,” noted the Denosumab Safety FDA Analysis. Test monkeys developed tooth and jaw abscesses on the drug and osteonecrosis of the jaw was a “recognized risk” with denosumab, documents stated.

Sadly, by the time it was approved, Prolia posed the same significant risks—ONJ, atypical femoral fractures, pain—as bisphosphonates, according to the drug’s warnings and precautions. It also had a higher price tag at  $2,557 a year and patients were cautioned that “multiple vertebral fractures could occur upon discontinuation of Prolia treatment”—a side effect not seen with bisphosphonates.

Why do both bisphosphonates and Prolia encourage osteonecrosis of the jaw—exposure of jaw bone through lesions that don’t heal, often linked to invasive dental procedures? Both drugs suppress “bone remodeling” (renewal) to prevent bone resorption/thinning and the jaw bone “has a higher remodeling rate than other bones” write ONJ researchers in StatPearls. Yes, the drugs may increase bone density, wrote researchers in Nature, but they “also increase … bone brittleness” and the paradoxical actions may “provoke local fractures.”

According to the European Journal of Cancer, ONJ is a serious condition and may result “in a chronic disease with negative impact on the quality of patients’ lives.”

Two weeks after Prolia’s FDA approval, Amgen deployed up to 1,000 drug reps to call on doctors and sell them on Prolia by focusing on the high discontinue rate of bisphosphonates. Today, instructions in Amgen’s “Patient Identification Series” tell doctors how to recognize patients who “may look perfectly fine on the outside” but are “failing” or “intolerant” on bisphosphonates, the competitor bone drugs. Prolia doctor marketing also includes a “Coding and Billing Information Guide” showing exactly how to fill out Medicare forms for the drug.

Switching patients from bisphosphonates to Prolia may be a lucrative marketing strategy but both research in the journal Odontology and in Case Reports in Dentistry notes the switch furthers fracture risks and ONJ risks, respectively.

Many patients have spoken out about side effects of taking bone drugs. On the Webby-wining website Askapatient.com, of 263 women in their 50s and older who had been prescribed Prolia, approximately 250 gave the drug the lowest possible rating. Most women cited incapacitating pain and weakness in their bones and joints along with dental pain, tooth degradation, and tooth loss.

A 64-year-old woman says she sustained an atypical femur fracture and left femur damage after a year on Prolia and a 78-year-old woman wrote that after one year on Prolia she broke a toe, but more women expressed fear of fractures if they stopped Prolia as prescribing materials warn. Being effectively “stuck” on Prolia, several women say their lives are “over.” Many said Prolia should be removed from the market.

Some women wrote that they became debilitated and bedridden from Prolia after leading active, energetic lives. Some said they now require a cane to walk and two wrote that they were unable to work and had to quit their jobs.

A theme with the Askapatient commentators was a feeling of betrayal by their doctors who didn’t warn them about side effects and the difficulty of discontinuation. Several women felt doctors were actually getting “kickbacks” to prescribe Prolia which isn’t too far-fetched; in 2013, Amgen paid more than $15 million to resolve allegations that it illegally marketed its similar drug bone drug Xgeva.

Clearly, no one wants serious side effects from a medication but nor do people want osteoporosis, thinning bones, or the risk of fracture. According to the Mayo Clinic, adults aged 19 to 50 and men aged 51 to 70 should consume 1,000 milligrams of calcium a day; for women over 51 and men over 71, that should be 1,200 milligrams of calcium a day. Vitamin D is also important and the Mayo Clinic recommends 600 international units for adults ages 19 to 70, which can be obtained from many foods and the sun.

In addition to avoiding the bone-degrading habits of smoking and drinking excessive alcohol, the Mayo Clinic emphasizes the importance of physical activity and especially weight-bearing exercises such as walking, jogging, and climbing stairs to keep bones strong.

Finally, and importantly, certain medications you might be taking could contribute to bone thinning or weakening. They include corticosteroids (prednisone, cortisone, prednisolone and dexamethasone) when used long term, SSRI antidepressants, proton pump inhibitors (used for Gastroesophageal reflux disease and acid reflux), aromatase inhibitors used for breast cancer, and some anti-seizure medications. A lifestyle of adequate bone-building nutrients, exercise, and avoidance of threats to bone health can help keep your bones strong for as long as you need them.