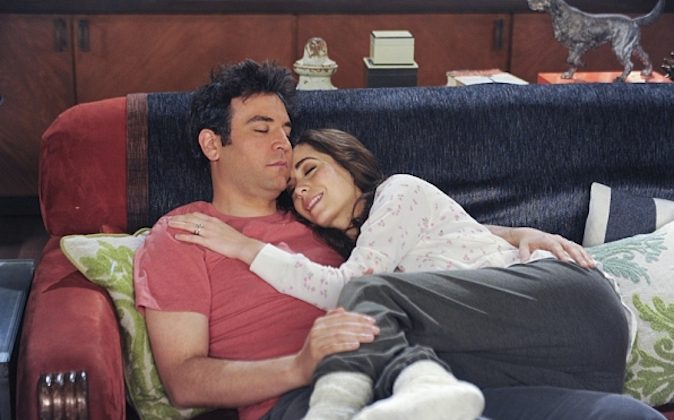 How I Met Your Mother Season 9 Finale Spoilers: Ted & the Mother Speculations in HIMYM (+Video)

Only one more week left to the greatly anticipated How I Met Your Mother series finale, and theories about the fate of Ted and the Mother are abound.

Episode 19 ‘Vesuvius’ opened a can of worms, with many speculating that Ted or the Mother, portrayed by Cristin Milioti, will die. This is so as in that episode, Ted and the Mother recount their life stories to each other, consider themselves “an old married couple,” and Ted gets emotional after the Mother says “What mother is going to miss her daughter’s wedding?” when he gets to the point in his story where Robin’s mum shows up.

All these instances point to a very emotional, and possibly tragic, incident that will happen to Mr and Mrs Mosby, which should be unveiled in the finale.

Two theories have gained traction. One theory is that Ted has Alzemier’s Disease, and the other is that either Ted or the Mother is dying, or have knowledge that they will die before their time. Both theories would explain why Ted is taking so eager to tell the full story of how he met the Mother to his kids.

There’s even a theory suggesting that a death has been hinted since Season 8. In Episode 20, ‘The Time Traveler,’ Ted imagines a scene where he showed up at the Mother’s door, saying that if he could, he give anything to meet up 45 days before the met in reality so as to spend that extra time with her.

The cast reaction to the season finale has added fuel to the “Ted or the Mother Dies” speculation.

Josh Radner (Ted) said “I feel like I’ll never forget the final table read we had,” before describing what will happen as “everything you love about How I Met Your Mother … funny and sad and lovely and truthful.”

Cristin Milioti has also said that “I could barely get through [the final table read].” Milioti, however, has said that the “Ted or the Mother Dies” theory is “insane.”

And recently Alyson Hannigan told E! Online that “I laughed, I cried, and I was like, ‘How are we going to shoot this? I’m going to be a mess!”

“But it was wonderful, and it was the perfect way to go out, and I’m so grateful that we got a season nine to end the show the way it should be. It deserved this ending.”

Still, because show creators Craig Thomas and Carter Bays have been consistent in subverting audience expectations via plot twists and hidden references, the theories and speculations persist.

Yet Thomas and Bays could be deliberately building up fans’ expectations for a certain end, and then work to subvert it. Fans think that it is unlikely given the cast’s emotional response to the series finale, but the cast’s reactions could too be a red herring.

There shouldn’t be any worries of an unsatisfactory finale, though.

“You’ll see what happens to everyone,’ she says. “We really tried to tie up every loose ending we could think of, answer every question we’ve asked and haven’t answered.”