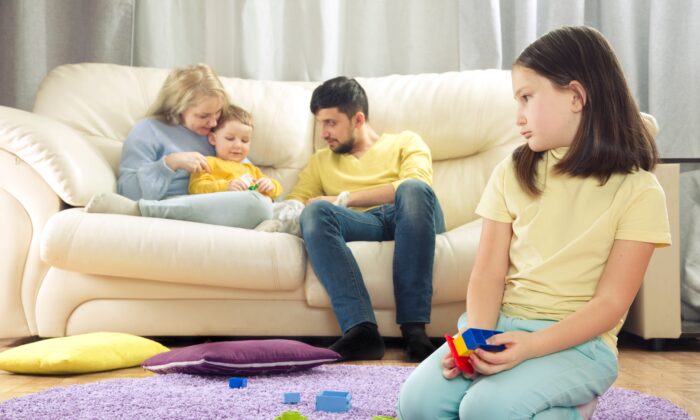 One child is often more easygoing and agreeable than the other, and that can lead to that other child getting less attention—and working harder in life to make up for it. (Tatyana Dzemileva/Shutterstock)
Wellness

How Having a Favorite Child Can Affect Their Lives

Parents can find it impossible not to favor the more agreeable child, and this has long-term effects
By Joni Ravenna Sussman
Share
FacebookFlipboardTweetRedditEmail
MOREPRINTFONT BFONT S

During the recent holiday season, many people may have experienced tension with family as grown siblings found unpleasant feelings of childhood jealousy still lingered. Parents may not have realized that they were the cause.

“It’s hard for a parent to admit that love can be doled out inequitably,” said Vera Rabie, author of “They Love You, They Love Me Not.” “But it almost always is.” And it turns out that the consequences of such parental partiality are not only pivotal in shaping the development of the child, but they’re also a huge indicator of that child’s future success and happiness.

Rabie’s studies indicate that favoritism is nearly inescapable and her book illustrates the many ways this favored or disfavored status plays out into adulthood. By studying hundreds of families over the years, Rabie has gathered enough proof to substantiate what she feels to be a new theory in child psychology, a theory she dubs DOLF, for “the distribution of love in families.” She hopes her studies will help to debunk many falsehoods, among which is the common misconception that the firstborn is typically the most favored.

“Birth order theory came out [as a result] of biographies which showed that most famous or intelligent inventors, philosophers, artists, religious leaders, and other contributors to society over time have been firstborn.” But according to Rabie, the likelihood that the firstborn is favored is about 50-50.

But so what if mom preferred Johnny to Joey? Is that really such a big deal? “Absolutely,” says Rabie.

The value comes in understanding the repercussions of family dynamics and realizing that we each carry a cooperative and competitive nature. The competitive side of that spectrum can drive us, to varying degrees, to compete with the person closest to us. For that reason, a family of four children will see the competition for parental favoritism play out between the two oldest and the two youngest. Or, in the case of a large family such as the Kennedys, among each couplet of siblings closest in age.

“We all tend to gravitate toward the sweeter, more easy-going personality, and really don’t know how to deal with anger,” said Rabie. That’s why invariably the child who, by nature, is a pleaser is almost always the favored child among each couplet of siblings. This built-in desire to compete with the one closest to us also explains the division of roles between each set of parents, which Rabie describes as the primary love giver and the auxiliary love giver.

But if you think that being the favored child is a recipe for success as an adult, it depends.

According to Rabie, in a two-parent household, when the primary love giver favors the sweeter, easier-going child, the disfavored child can sense that this all-important, life-giving love is being funneled away from him or her, and instinctively feels threatened on an existential level.

This makes the disfavored child angry, which then perpetuates the differences in the two siblings’ personalities. When one considers that a young child has no chance at survival unless he or she is loved and cared for, it stands to reason that each child’s innate drive to survive would include an ability to “sniff out love,” as Rabie puts it, and to resent anyone who might be receiving the bulk of it.

One result of parental partiality is that the favored child of any couplet of siblings remains kind, gentle, and isn’t easily angered. In a sense, they become the kinder person, likely more successful in the realms of social relationships and overall measures of life satisfaction that arise from such personality traits. But this can lower financial success later on in life, leaving the favored child less hungry to compete in our hyper-competitive world. The results are more profound if the child is favored by both the primary love giver and the auxiliary love giver.

“They turn out lackadaisical, happy-go-lucky and not too concerned with money, career, or future, without a clear path to success; while the disfavored child grows up with the drive and ambition to compete, and ends up winning the social race in real life,” Rabie concludes.

Since most parents see children as extensions or reflections of themselves, the disfavored child, now grown and successful, suddenly becomes the one the parents lavish with attention, which can leave heretofore favored child hurt, bewildered, and depressed.

What is a primary love giver, you may ask.

The author highlights the favored and disfavored status among the Kennedy couplets in her book and attributes much of what is thought of as “The Kennedy Curse” to this clear favoritism dispensed between the sets of children both as a result of Joe and Rose’s natural preferences, and as the patriarch’s way of intentionally engendering a competitive spirit within each of his children.

But what of those many famous firstborns? One might assume they were all favored.

“Roseanne Barr was very disfavored and vindictive to her family but [she is] famous and ambitious,” said Rabie. “In fact, most successful people are disfavored.”

So, this year, if you noticed that Mom is paying more attention to your brother than you at the holiday gathering, rather than get upset, look inward for feelings of anger, anxiety, or depression. Those are the emotions Rabie’s DOLF theory aims to heal.

And those who are parents themselves can also use the holidays as a wake-up call to take a look at their own subtle preferences. If you find you have a soft spot for one child over another, don’t berate yourself. Know that this is common.

By looking honestly at family dynamics and the tendency to favor the easier-going child, we can make adjustments, according to Rabie. We can also help to mold our children to be more complete, whole human beings by encouraging the “pleaser” to be more assertive and the “aggressive child” to be kinder.

Finally, as parents, we can become aware of the ways in which we compete with each other for our children’s affection. In the process, we’ll create not only happier, healthier adults, but joyous future holiday gatherings instead of annual fighting grounds filled with landmines of old hurts just waiting to be tripped.